Ben and Ken and Marvin and Bob and Bill
and me and the Talking Heads, too:
Music at this year's Kansas Silent Film Festival 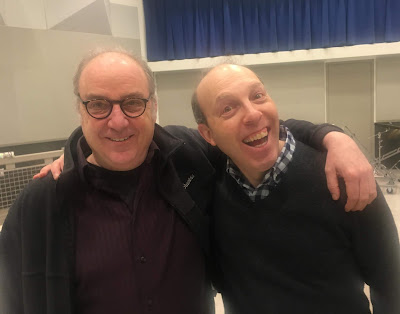 This year's Kansas Silent Film Festival was highlighted by some great films, special guests, and also a personal milestone.

For me, the 2019 gathering marked 20 consecutive years of attending this event, which is held each February at Washburn University in Topeka, Kansas.

Twenty years? Other than being married, and breathing, I haven't done anything for 20 years. Heck, it's a run nearly as long as the silent film era itself.

More below. But about this year's festival.. 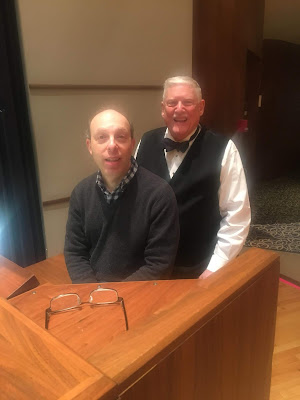 It was a special privilege to hear and collaborate with fellow silent film musicians, including regulars Marvin Faulwell, Bob Keckeisen, and Bill Beningfield, and guests Ben Model and members of the Alloy Orchestra: Ken Winokur, Terry Donahue, and Roger Miller.

Highlights included the Alloy Orchestra's pounding accompaniment for 'Metropolis' (1927); Marvin and Bob's controlled and evocative score for 'The Daughter of the Dawn' (1920); and Ben Model doing his music for 'When Knighthood was in Flower' (1922), a film he reissued on DVD on his Undercrank label.

Ben also gave a slightly abbreviated edition of his talk on undercranking and film speeds in use during the silent era. Below is an underexposed photo of his uncranking talk, but I liked it because of how Ben's pose mirrors the action on screen. 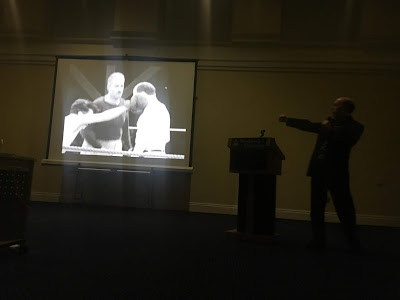 Film speed is just one of many issues that can prove troublesome when presenting films from the silent era to modern audiences. It's hard for people to grasp that in early cinema, for many years there was no standard film speed, either for photographing action (called "taking speed") or projecting it in a theater.

But Ben's presentation shows this aspect of silent cinema was well-known by filmmakers, who would deliberately incorporate various taking speeds into what they did.

I remember reading about this practice in books such as Walter Kerr's 'The Silent Clowns.' But Ben has really gone into the archives and sussed out hard evidence of how extensive the practice was, how filmmakers made use of it, and what a difference it made.

Most amazing are statements from silent-era stars such as Milton Sills, who wrote in detail how an actor had to gauge his or her movements to allow for the way they would appear on screen, which was almost always at a slightly brisker pace than reality.

So film speed, and specifically undercranking, is one of the foundations of early filmmaking technique. Bravo to Ben for helping us all understand its impact!

As the festival's utility musician (I'm listed in the program as "staff pianist"), this time around I was asked to provide scores for five movies: three short films and two features.

All went well, generally. I was most pleased with an unusual film, 'Venus of the South Seas' (1924) starring Australian swimming champion Annette Kellerman in her only surviving film. 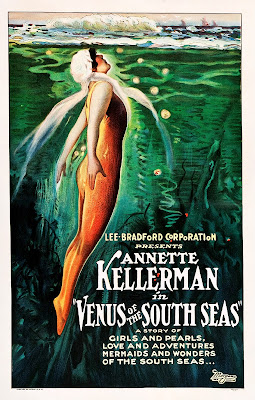 For this very lightweight drama, percussionist Bob Keckeisen and I collaborated on a score that tried to stay on the shimmery side, just like the sparkling water that appears throughout the film.

So I developed material that mirrored early minimalism that first started being heard in the 1970s. I was running through some of it in a practice room, and I'm told someone on the piano faculty wanted to know who was playing the Philip Glass music!

Not to get too technical, but this was very much a "sharped 4th" score: one in which all melodies are built on a scale in which the fourth note is the one between "fa" and "so". I guess you could say it's "fo."

But that one little note makes all the difference, as it lends a shimmering quality to any run of notes. So that's what I played with throughout the film, while Bob contributed sounds ranging from the sawing of a metal file to calls on an underwater horn.

It all fell together quite effectively, I thought, considering that Bob and I spoke about 'Venus of the South Seas' for all of about a half-hour the day before. 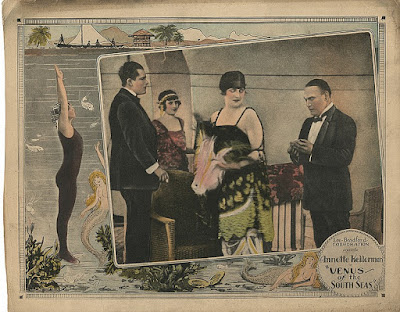 But it was enough to work in some good cues. Most impressive was a quick scene in London, which saw Bob ringing out the "Big Ben" chimes in C major. (A tribute to Ben Model, too!) It worked and sounded pretty good, I thought.

For any water or swimming scenes, I had a riff of repeated notes that I'd play for as long as it made sense to do so. Occasionally I'd vary the harmony, but mostly it was a nice steady tapping that fit the on-screen action and helped it move along.

So it was most satisfying when I landed on just the right moment near the end to start this up again and slowly build to a nice finish. And Bob K. caught this wave as well, hitting the suspended cymbal softly at first but then growing as I pushed the volume on my repeating chord.

And we both built to a nice level as 'The End' appeared on screen, and kept it there for what felt just the right amount of time before going out on one final bump up.

Wow! Few accompaniment experiences have been as satisfying as that!

So thanks to Bill Shaffer and everyone (too numerous to name, but you know who you are) who make this festival work.

And by work, I mean they work year-round, and thus make it easy for an out-of-towner like me to just show up on the big weekend and do my thing.

It's been enough to keep me coming back for 20 years, and was a big influence in getting me to start pursuing silent film accompaniment myself.

And after 20 years, I find myself thinking about the Talking Heads, one of the few pop music groups I know anything about.

"You may find yourself at the Kansas Silent Film Festival for the 20th year in a row. And you may yourself, how did I get here?"

How? It wasn't letting the days go by. It was getting placed on leave from a job teaching middle school English. (Yes, I washed out in my attempt to teach middle school kids.)

This led to a plan to write a book about silent film, and this led to the idea of going somewhere so I could recover the magic of this art form.

Recover? Yes! As a teenager, I had a passionate interest in the silent film era. But it faded due to a misguided attempt to behave and act like an adult. (Big mistake!)

In March 2000, I wanted to reconnect and see if anything was there. So I used this new thing called the Internet to see if any festivals were happening soon.

There was: something called the Kansas Silent Film Festival. And a pair of Delta Airlines 'Friends and Family' passes would get me there and back.

Next thing I knew, I was sitting in the White Concert Hall at Washburn University, with the Mont Alto orchestra doing live music to Keaton's 'The Cameraman' (1928). 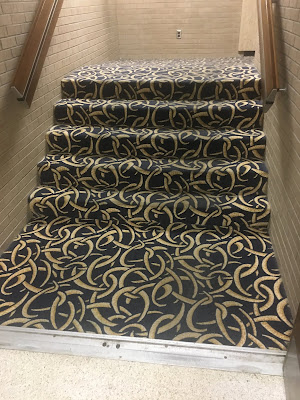 The distinctive "bio-hazard" design of the White Concert Hall's carpeting, which last year I was told would be replaced. Returning this year, I was thrilled to see it still there.

I was reminded of what I loved about silent film. But as I watched that magical "dolly back" in 'The Cameraman' that reveals the monkey to be cranking the newsreel camera, I immediately sensed something was going on that would be a big part of my future.

(I had seen the picture before, but not since college. Seeing it again, I recall feeling excited at how much fresh creative energy Keaton was finding in the silent cinema even as it was ending. It was as if he was saying, "Look at what we can still do with this!")

It took awhile for me to figure out that silent film would lead not to a book, but to silent film accompaniment, would eventually become the main outlet for my creative energy.

But back at that first-for-me Kansas Silent Film Festival, I found more than just silent film. Visiting from the far-off East, I found myself welcomed by friendly people who by rights I never should have met. But I'm glad I did.

Next thing I knew, I was putting 16mm prints in the trunk of my rental car and getting directions to the afterglow at the old Holidome on Fairlawn Boulevard. And there we were, enjoying drinks and eating Doritos as Rodney Sauer of Mont Alto played ragtime on the lounge piano while a few bemused barflies looked on.

I came to that festival uncertain of what was next for me. Unexpectedly, I came away with a renewed sense that anything was still possible: that I could start a business (which I did), that I could find a creative outlet (I have), that I still had a lot to do and give and experience in this life.

So I returned the next year, and the year after, and every year since. Each time, I'm reminded of that same feeling I got the first time: that life continues to offer possibilities as rich as those shown by Keaton in 'The Cameraman.'

And so, at last night's 'Cinema Dinner,' when festival director Bill Shaffer asked if anyone had attended 20 years in a row, I thought to myself: "I'm ready for my close-up, Mr. Shaffer!"

But I didn't say anything. Instead, I just stood and took a bow.

Thanks to everyone at the Kansas Silent Film Festival for keeping it going all these years.

Only 52 weeks and five days until the next one. Next year's festival, already on the calendar, is Feb. 28-29.

So get ready to celebrate Leap Day in Topeka.

And the burning question is: will they program the Fatty Arbuckle feature 'Leap Year' (1920)?