What if Disney's songwriting duo the Sherman brothers had been born in Beijing, not NYC? 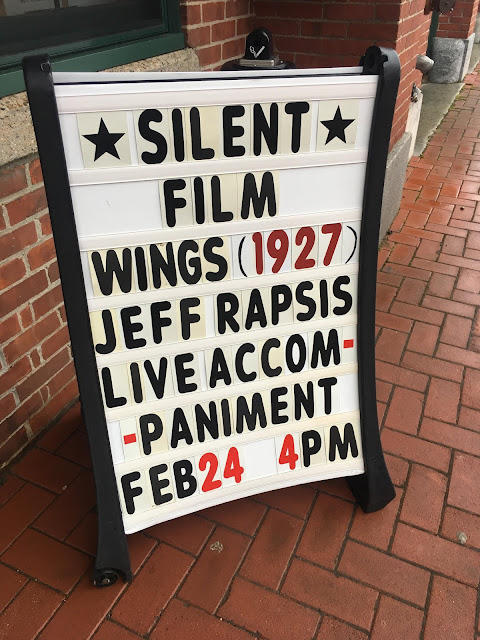 I've been remiss in updating my silent film adventures due to a big grant-writing deadline.

But now, before heading off to London to accompany a screening of 'The Cat and the Canary' at the Kennington Bioscope next week, it's time to catch up.

Since returning from the Kansas Silent Film Festival, I've had the pleasure of doing live music for two very different motion pictures: one a familiar warhorse, and the other completely unknown to me.

The former: 'Wings' (1927), the grand epic of the skies that won Best Picture at the very first Academy Awards.

The latter: 'The Stormy Night' (1925), a Chinese silent comedy/drama that was considered lost until just recently.

Booked by the Center for the Arts in Natick, Mass. for an afternoon screening on Sunday, Feb. 24, it was intended as a warm-up for that evening's Oscars ceremony.

For me, the circumstances were hard to beat. That morning, I had flown from Kansas City through Detroit and then into Manchester, N.H., arriving in plenty of time to swing down to Natick and load in my gear for the 4 p.m. show.

So what better prep for 'Wings' than flying not one but two commercial flights right before the screening? 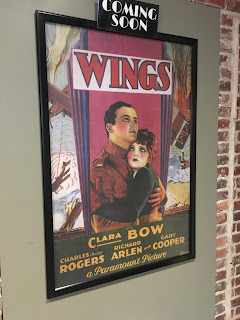 We enjoyed a healthy turnout, and a pre-show poll found most people new not only to 'Wings' but also the silent film experience. (And the theater, managed by Josh Valentine and Nicola Anderson, always does such a great job promoting the screenings, putting up vintage posters to build excitement.)

Located in a beautifully refurbished firehouse, the Center for the Arts boasts a gleaming Yamaha grand piano in its upstairs performance space, where movies are shown.

It's been beckoning me since I started performing in Natick. One of these days I'll use it, but so far all the films in Natick have been better served by digital synthesizer, I think.

This time around I found the piano up on the risers that constitute the "stage." And even though I wasn't going to use it, I couldn't resist opening the lid and playing a bit...and then realized that it was at the perfect height for me to use while standing up! 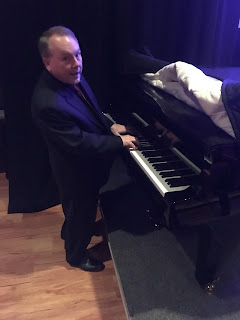 Now there's an idea! It's sitting down at a desk bad for you? Isn't the human body designed to function most efficiently in a standing position?

So why do people sit at a piano to play it? Wouldn't it make more sense for the player to stand?

We have stand-up comedians. Why not stand-up pianists?

Quick, get me a patent lawyer so I can protect my innovative new "pedal extendeder," which allows you to easily convert an old-fashioned sit-down piano into a modern, up-to-date, ergonomically superior STAND UP PIANO!

Order before midnight tonight and we'll throw in a VHS bootleg tape of Buster Keaton's 'The General'! 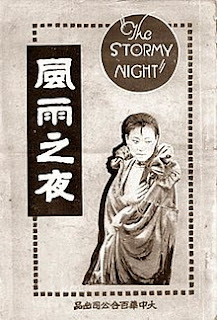 Last Saturday I had the privilege (and the challenge) of creating music for a newly rediscovered Chinese silent film that's been making the rounds of elite film venues.

In this case, it was for a screening of 'The Stormy Night' (1925) at the Harvard Film Archive.

The film, a light-hearted comedy/drama about the upper classes in pre-Maoist China, had been missing since its release.

This was par for the course. As the Harvard Film Archive notes tell us:


More than 650 films were reportedly made in China between 1921 and 1931, yet no more than twenty have survived the wars that followed. The serendipitous rediscovery of Zhu Shouju’s 1925 film 'The Stormy Night' gives us a rare opportunity to learn about this significant yet forgotten era of Chinese silent cinema.

That's a pretty rotten record, even for silent film!

But yes, a nearly complete print of 'The Stormy Night' was discovered some years back in a Japanese archive. After repatriation to China, it was restored by Shi Chuan, a Shanghai-based film scholar. It's now available for screening for the first time in nearly a century.

A special treat for this screening was an introduction by Shi Chuan himself, with translation by Jie Li of Harvard's Department of East Asian Languages and Civilizations. 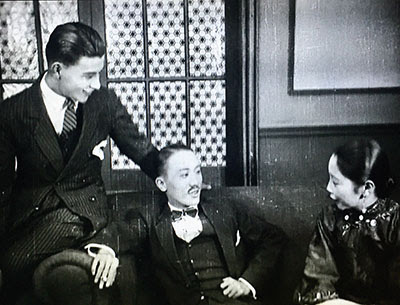 Unsurprisingly, the audience was packed with Chinese students. Surprisingly, the accompanist was an occidental of Irish-Lithuanian-French-Canadian extraction with no cultural connection to the film's milieu short of an appetite for General Tso's chicken.

But I looked at it as a challenge: how could I create appropriate music for a film made in a completely different cultural context compared to my own?

This, after all, was not the Chinatown riot sequence from Buster Keaton's 'The Cameraman' (1928). Nor was it the seedy faux Chinese opium den depicted in Raymond Griffith's 'Paths to Paradise' (1925).

With cultural references like those in his head, what's an accompanist to do?

My approach was to back off and keep it light. It was a comedy, after all. And it seems to me no matter what the cultural context, with comedy, less is more.

Also, I tried to use a musical language that was separate from the familiar Western/classical harmonies and chord progressions.

Melody, yes. But not the way you'd encounter it in Mozart or Beethoven. More like a modal sound,

My overriding attitude was this question: "What would it sound like if Disney songwriters Robert B. and Richard M. Sherman had been born in Beijing instead of New York?" That's what I was going for. 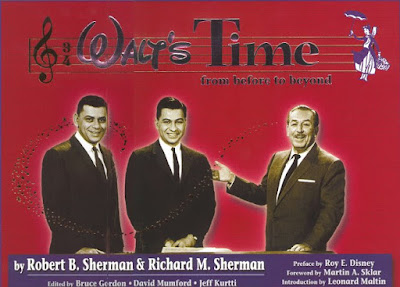 Songwriting brothers Richard M. and Robert B. Sherman with their patron, Walt Disney.

(I think the Sherman brothers were among the best songwriters of all time, and I'll fight anyone who disagrees.)

But back to pre-Maoist China. To help get my mind in the right place for this, I opted for a synthesizer texture that was light and airy and heavy on the strings and harp.

Just by hitting a single note, you could hear we were in a different place. But it wasn't the plinkety-plink of xylophones or the tired and not-very-exotic crash of a gong. It was more of clean sweep, giving me implicit license to work in a fresh style.

That's what I was going for. And from the reaction to the film, I think I wasn't too far off.

I mean, people actually laughed at this formerly lost comedy from a lost world. It engaged them, drew them in, and they enjoyed it.

Thus I'm really glad I didn't go with my original plan, which was to play variations on 'Chopsticks' for 90 minutes.

Thanks to Haden Guest and Karin Kolb of the Harvard Film Archive for continuing to program a wide variety of silents with live music.

And special thanks to Shi Chuan for rescuing this rare film from oblivion, and for coming all the way to Boston to share it with us!
Posted by Jeff Rapsis at 9:52 AM