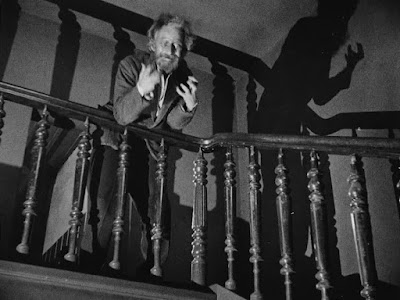 Prof. Georg Manfeldt: what music goes with this guy?

So there I was, in the middle of creating live music to the nearly three-hour-long silent sci-fi epic 'Woman in the Moon' (1929), when I became inspired by a tuba part I'd played several weeks ago.

Which tuba part? That of the 'Academic Festival Overture' by Johannes Brahms, which was on the program of a Feb. 2 concert at the Manchester (N.H.) Community Music School, where I sometimes help out when competent tuba players aren't available.

How did this aid me in scoring a 90-year-old German movie about mankind's first voyage to the moon? Let me explain, as I think it's a good example of how improv-based music can surprise even the person doing it.

Here's the deal: one of the first characters we meet in 'Woman in the Moon' is an impoverished old professor, bounced out of the academic fraternity long ago for his outrageous ideas about mountains of gold on the lunar surface and the space travel required to retrieve it.

For this character, Prof. Georg Manfeldt, I've developed a skittering chromatic theme that I feel captures his prolonged isolation, and also his roots in science and pedantry. It serves as his "leitmotif" for the entire picture.

However, an accompanist for 'Woman in the Moon' is challenged early on by a flashback to 30 years earlier, when Prof. Manfredt was a respected academic, so much so that he's seen sharing his controversial ideas to a lecture room filled with distinguished colleagues. 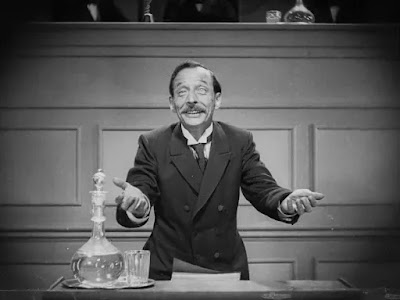 Manfeldt as a much younger man. Actor Klaus Pohl was actually only in his 40s, but was made up to look much older as Prof. Manfeldt for most of 'Woman in the Moon.'

Music can and should (I think) help reinforce the idea that in this flashback, we're suddenly in a different time and place in this character's life. In past 'Woman in the Moon' screenings, I would try and transform the skittering chromatic melody into something bolder and more confident, and it was okay, but it never seemed to feel quite right.

So last Sunday evening, at the annual Boston Sci-Fi Marathon, I decided to take another route. And Brahms came to mind.

You may know the composer's aforementioned 'Academic Festival Overture' is built with student and university tunes popular in the 19th century. One of the most prominent is 'Gaudeamus Igitur,' the still-popular commencement and drinking song that goes like this. Pretty catchy, right?

To me, this music sounds like college in a classic, abstract kind of way. Whether you partied all four years or spent them all in the library or never set foot on a campus, 'Gaudeamus Igitur' conjures up "university" in the same manner as Elgar's 'Pomp and Circumstance.'

An excerpt of the exciting tuba part for the 'Academic Festival Overture.'

And I had just played it, or at least the tuba part, as orchestrated by Brahms for his overture's big finale. So it was kind of in my head.

Thus, when director Fritz Lang made the flashback leap from the "present" (meaning 1926) back to 1896, I made the snap decision to make Prof. Manfredt's music change to something completely different as well.

And out came 'Gaudeamus Igitur,' played as underscoring to the professor addressing his colleagues. To my mind, it instantly captured both the change in time and situation, but also conveyed an atmosphere of stuffy academia—the milieu that was about to reject the upstart professor and his outlandish notions of spaceships and lunar gold.

Lang's orderly lecture hall quickly gives way to a chaotic (and visual) uproar, with close-ups of a proctor ringing a bell and another blowing a whistle, sound effects both recreated live by me.

So 'Gaudeamus Igitur' gets swallowed up by me ringing my grandmother's school bell and also blowing a referee's whistle, my left hand still working the keyboard, all making a tremendous racket until Lang fades us back into the present, with the professor's original melody just drifting along high and unaccompanied.

And that's the end of the Brahms, right? It served its purpose, but then the film shifted back to the present, and so did I. No more musty 19th century academic anthems, right? 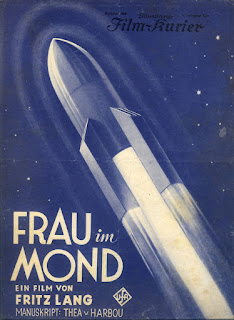 Well, more than two hours later, 'Woman in the Moon' is in the process of reaching its multi-stage climax. Against all odds, Prof. Manfeldt has actually made his long-dreamed-about journey to the lunar surface. (Spoiler alert!) There, while using a diving rod (!) to find water, he stumbles across a huge deposit of gold, proving his theory correct after so much personal suffering and sacrifice.

For the now-joyous and awestruck professor, it's a moment of supreme vindication, even though he's all alone. How to communicate that musically? Without thinking, I found myself shifting back into 'Gaudeamus Igitur,' but now more like Brahms treated it: with a dash of triumph in its simple structure and chords.

And it also felt right, I think because it brought it all back to his original lecture hall humiliation. It's something that Lang didn't depict visually at that point (no flashbacks), but which the music could bring out all on its own.

Alas, the professor's triumph is short-lived, and so is the reprise of 'Gaudeamus Igitur.' But to me, this turned out to be one of the dramatic highlights of the screening. I was delighted how it fell into place: a reprise more than two hours later that effectively book-ended the film, or at least one of the story's major threads.

Afterwards, several people commented about how effective it was—and I hadn't even planned it!

And that's how playing tuba in a youth orchestra can lead to unexpected and wonderful things. So when offered the chance to do so, never turn it down.

As for the screening itself: my long-awaited chance to do music for 'Woman in the Moon' for the Marathon audience earned me a very gratifying standing ovation from the discerning attendees. (These are serious film-goers, folks. Some even carry rayguns!)

And it was a all the more satisfying because the two days leading up to this long-awaited show was a time of close calls and compromises. 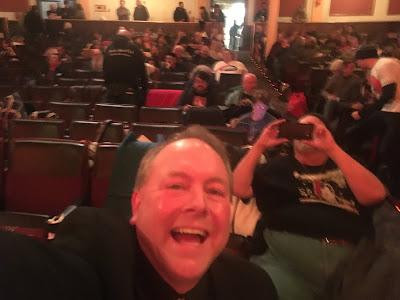 A blurry selfie taken while setting up my keyboard prior to 'Woman in the Moon' at this past weekend's annual 24-hour Boston Science Fiction Marathon.

Due to a mix-up, the digital restoration was never sent from Germany. So a last-minute substitute had to be made by way of a standard DVD edition, which looked reasonably okay on the Somerville's giant screen.

And then, in hooking up my digital keyboard to the Somerville's terrific house sound system, a crucial component for one of the lines was discovered missing. So we had to go with a mono output, and although it worked, the whole character of the sound was very different from what I'm used to in that house.

But you know what? Once the lights went down, none of it mattered. The audience was into it: all 169 minutes, which is a long flick by marathon standards.

Funny: one of the reasons 'Woman in the Moon' had never played the 'Thon before was because it was thought of as "too long." I could never understand that, as we're talking about a 24-hour-long-marathon, folks.

But we did it. Thanks to Garen Daly and everyone with the marathon, and Ian Judge and David Kornfeld of the Somerville Theatre, and all those in my entourage, especially Ariana Cohen-Halberstam, for all the help and support.

The ovation was for all of us—and for Fritz Lang and Johannes Brahms, too!