Taking a chance on 'Dr. Mabuse, the Gambler' at Town Hall Theatre on weekend of Nov. 14-15 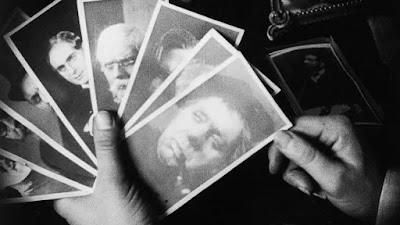 Pick a card—or in this case, a headshot, each showing lead actor Rudolf Klein-Rogge in one of the title character's many disguises.

This month I'm taking a gamble by doing music for 'Dr. Mabuse, The Gambler,' the sprawling 1922 crime thriller in which German director Fritz Lang really hit his stride.

Why a gamble? Not because of the film, which is tremendous—some call it a masterpiece.

It's a gamble because I'm asking audiences to take a chance on a rarely screened foreign film from nearly a century ago which almost nobody today has heard of, and which runs 4½ hours.

It's also a gamble because due to its length, we're running it in two installments: Part 1 on Saturday, Nov. 14 and Part 2 on Sunday, Nov. 15. Both screenings start at 2 p.m.

So I'm asking would-be attendees to basically give up a weekend to immerse themselves in the twisted world of 'Dr. Mabuse.'

(Which, by the way, I'm told is pronounced "mah-BOO-zeh," which I didn't realize until now. I lead a sheltered life.)

And all this in the middle of a pandemic that's keeping people away from theaters in droves.

Talk about rolling the dice! 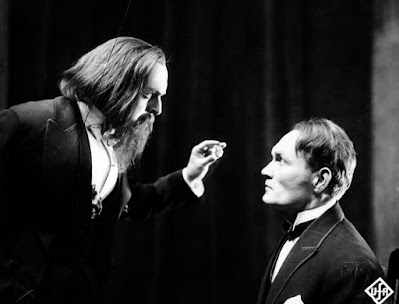 But in the spirit of Dr. Mabuse, whose LinkedIn page (if he had one) would include "hypnotism and mind control" among his skills, I am attempting to will audience members to attend.

Look into my eyes. You're feeling sleepy. Verrrrrry sleepy.

You will attend. You must attend. And you will bring many friends.

And it's also a gamble because I'm in the process of developing completely new and original musical material for 'Dr. Mabuse,' which I will use to create an improvised score in real time.

Better hypnotize myself while I'm at it!

For more about the film and our two-part screening, here's the press release. Hope to see you there for this rare chance to see an early cinematic masterpiece in two back-to-back screenings. 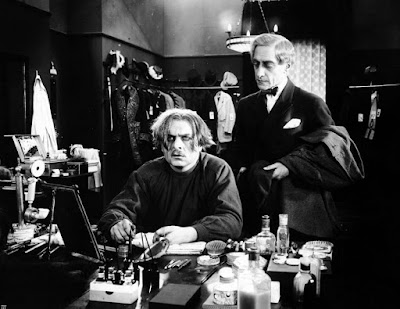 Dr. Mabuse preparing for his next adventure.

The rarely screened early masterpiece from German director Fritz Lang will be presented in two parts over two days at the Wilton Town Hall Theatre: Part 1 on Saturday, Nov. 14 at 2 p.m., and Part 2 on Sunday, Nov. 15 at 2 p.m.

Admission for both screenings is free and open to all; a donation of $10 per person is suggested to support the Town Hall Theatre's silent film series.

An original score for both parts will be performed live by silent film accompanist Jeff Rapsis of Bedford, N.H.

Based on a contemporary novel by Norbert Jacques, 'Dr. Mabuse' tells the story of a criminal mastermind who uses disguises and hypnosis to defraud and control his wealthy victims. 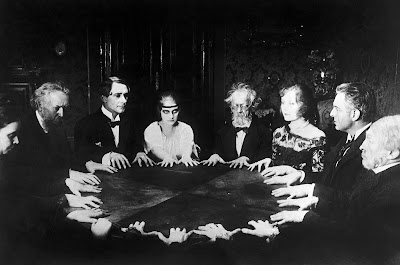 Oh, the places you'll go! An evening out with Dr. Mabuse.

"This is filmmaking on a grand scale," said Rapsis, who has created new musical material to help bring Lang's sprawling story to life. "For movie fans, the rare chance to see Lang's ground-breaking film on the big screen with live music over two days, as he intended, is not to be missed."

The Berliner Illustrirte Zeitung called the first part "the attempt to create an image of our chaotic times" and went on to state that it "will give people fifty or one hundred years from now an idea of an age that they could hardly comprehend without such a document."

"Mabuse remains memorable for the darkly brooding atmosphere that Lang creates, a disturbing compound of hysteria and fatalistic passivity.”
– John Wakeman, World Film Directors Volume 1
Both parts of 'Dr. Mabuse, The Gambler' (1922) will be shown in separate screenings over two days at the Town Hall Theatre, 40 Main St., Wilton, N.H.

Part 1 will be screened on Saturday, Nov. 14 at 2 p.m., while Part 2 will run on Sunday, Nov. 15 at 2 p.m. Both screenings will feature live music by silent film accompanist Jeff Rapsis.

Admission is free for both screenings. A donation of $10 per person is suggested to support the Town Hall Theatre's silent film series.