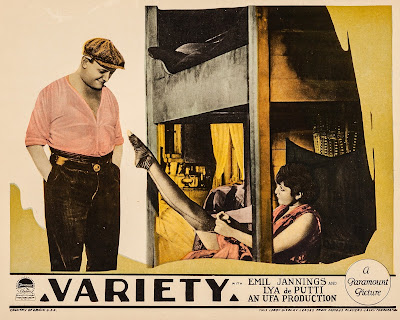 An original poster for 'Varieté,' renamed 'Variety' for its American release.

Talk about your multi-course meal!

An interesting thing about this one is that for years, the film circulated in a cut-down "American" edition, so named because distributor Paramount heavily edited the movie for U.S. release.

But archivists in Germany have since restored the original version, and what a difference!

There's an art to trimming a movie: done right, it can improve a picture's overall effect, such as what happened the silent version of Harold Lloyd's 1929 comedy 'Welcome Danger.'

In the case of 'Varieté,' however, Paramount excised so much content that it fundamentally altered the plot, and the artistic point, of the picture.

So to finish off Thanksgiving weekend, on Sunday afternoon we'll explore what happened by seeing parts of the U.S. release of 'Varieté,' followed by the completely restored version.

For more details, check out the press release. Hope to see you this weekend, and happy Thanksgiving to one and all! 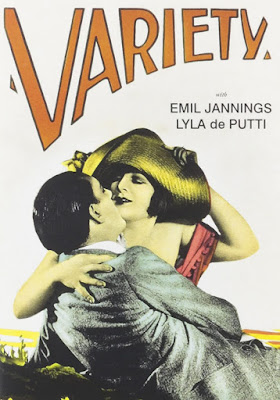 At Town Hall Theatre on Sunday, Nov. 29: two versions of the same film

WILTON, N.H.—What if censors cut so much from a movie that it completely changed the basic plot?

That's what happened with 'Varieté' (1925), a silent drama from Germany with a risqué story that ran counter to American standards of what was acceptable on movie screens.

See the difference between the original and censored versions of 'Varieté' when the Town Hall Theatre screens the film with live music on Sunday, Nov. 29 at 2 p.m.

Admission is free and open to all; a donation of $10 per person is suggested to support the Town Hall Theatre's silent film series.

The Town Hall Theatre continues to observe procedures to comply with all state and CDC public health guidelines, including reduced seating capacity. For complete information about safety protocols, visit www.wiltontownhalltheatre.com

'Varieté,' a drama about love and infidelity among trapeze artists in the European carnival scene, was long recognized for its innovative camera work and intense performances.

For decades, the film circulated in the mutilated American version, which is notably shorter than the original German release prepared by director Ewald André Dupont. Among other changes, Paramount cut the entire first 10 minutes of  'Varieté.'

But in recent years, the original cut of 'Variety' has been reconstituted by scouring archives worldwide in search of the highest quality surviving materials.

Researchers succeeded in putting together a restored version of the film that reflects Dupont's vision.

At the Town Hall Theater, audiences will first see about 15 minutes of the heavily edited U.S. version of 'Varieté.'

Following that, the restored full-length version of 'Varieté' will be shown.

"This will vividly show how censors could completely change important aspects of a film," said Rapsis, the accompanist.

Rapsis said 'Variety' is a good example of the challenge of seeing early cinema in its original state.

"Film is not a permanent medium, and we've lost about three-quarters of all movies produced during the silent era.

"In some cases, often only heavily edited versions of films are available. So we're really fortunate that archivists were able to restore 'Varieté' to its original length."

In addition to its emotional intensity, 'Varieté' continues to receive positive reviews for its technical innovations.

The complete restored 'Varieté' plus an excerpt of the U.S. version will be screened with live music on Sunday, Nov. 29 at 2 p.m. at the Town Hall Theatre, 40 Main St., Wilton, N.H. Admission is free; a donation of $10 per person is suggested to support the Town Hall Theatre's silent film series.