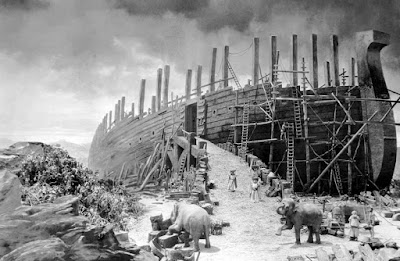 With 'Noah's Ark' (1928), we encounter the problem of how much to tell an audience beforehand.

(And if you don't want to know anything, please skip to the press release below...)

For instance: should you tell people that extras drowned during the film's production? Do you mention this before, after—or not at all?

I'm thinking about this because I'm accompanying 'Noah's Ark' on Sunday, March 28. It's a sprawling late silent Biblical blockbuster, and just the thing to get you in the mood for Easter. 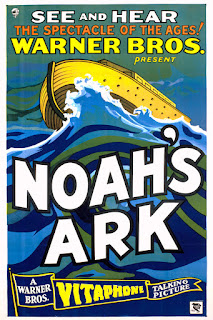 There's a lot more info in the press release (below), including how it's a part-talkie, and how we'll run the film with the recorded sound portions intact.

But about the question of how much to tell an audience...

Some say a film should stand on its own merits. It should speak for itself—even a silent! It shouldn't need someone to "explain" it.

But for silents, I've found it really helps to give people some background. For many folks, it's such an unfamiliar experience—the stars, the studios, the story-telling conventions.

So I usually try to say a few things, with the emphasis on "few," as people have come to see a silent movie, not hear some guy go on and on.

I think Denise Morrison of the Kansas Silent Film Festival gets the balance just right: she gives audiences just enough to illuminate the world of the film and the people who created it.

But in the case of 'Noah's Ark,' what about the purported drowning of three extras?

Mention it beforehand, and it's all people think about when watching the film. And I don't think that's good, nor is it fair to the filmmakers.

Don't believe me? Consider the case of Harold Lloyd. 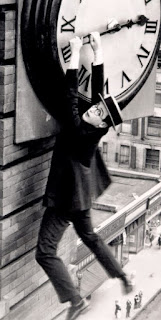 Prior to a screening of his thrill comedy 'Safety Last' (1923), if you mention that Lloyd was missing two fingers from one hand, people can't forget that.

And later, it greatly changes how an audience experiences the scenes of him hanging from cornices and clock hands high above Los Angeles. It serves to drain away any possibility of being swept away by the story or the characters or the moment.

Why? Because we can't forget those two missing fingers.

So in my introduction to 'Noah's Ark,' I won't mention the drownings. Let the audience discover the picture on its own terms. Afterwards,

And for those of you reading this, I've already spoiled it. But come anyway. It's a big sprawling Biblical epic that will sweep you away...no, wait—let me rephrase that. 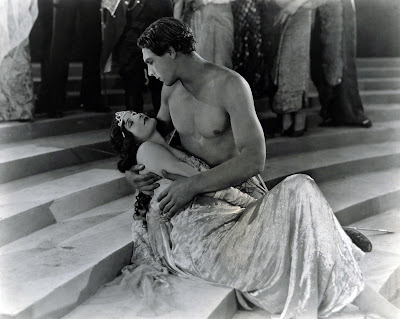 WILTON, N.H.—It was the last of the silent epics—released so late in the era that Warner Bros. added two brief talking sequences to it. It was 'Noah's Ark' (1928), an adaptation of the classic Biblical tale on a massive scale as only Hollywood could do.

To celebrate the Easter season, a restored print of 'Noah's Ark' will be screened with live music on Sunday, March 28 at 2 p.m. at the Town Hall Theatre, 40 Main St., Wilton, N.H. 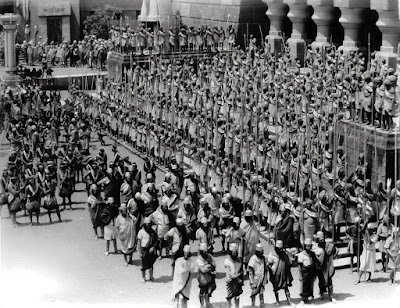 A cost of thousands—most of whom made it through the production.

The contemporary story plays out across war-torn Europe; 'Noah's Ark' seeks to apply the lessons of scripture via flashback to the Biblical tale of Noah building an ark to survive God's wrath and the great flood.

'Noah's Ark' was directed by Michael CUrtiz, who would later helm such Warner Bros. classics as 'Casablanca' (1942). It stars George O'Brien, Dolores Costello, and Noah Beery, who all play dual roles in both the Biblical and modern story.

'Noah's Ark' is highlighted by its spectacular flood scenes, which were staged on such a massive scale that several extras drowned during the production. The incident, which the studio kept out of the press, led to increased safety rules in the motion picture industry.

In an era when movie budgets rarely exceeded $250,000, 'Noah's Ark' cost Warner Bros. the then-unheard-of sum of $1 million to make. However, it earned more than $2 million worldwide, making it a triumph for the studio.

At the Town Hall Theatre, the version of 'Noah's Ark' will include the original talking sequences, which total about 20 minutes. The remainder of the film will be presented as silent with live musical accompaniment by Jeff Rapsis. 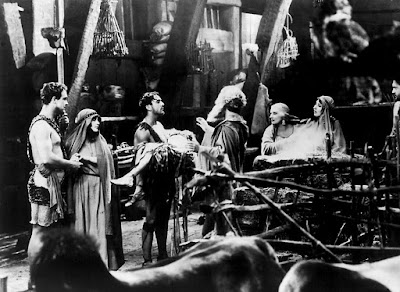 "Because it's a part-talking picture, 'Noah's Ark' is an interesting hybrid in which you get to hear the actual voices of performers who are otherwise silent, with dialogue conveyed by title cards," Rapsis said. "It captures Hollywood in the midst of the chaotic changeover from silent to sound movies, which took place over two years starting in 1927."

Rapsis improvises scores for silent films using a digital synthesizer to recreate the texture of the full orchestra.

"It's a bit  of a high wire act," Rapsis said. "But the energy of live performance is an essential part of the silent film experience."

"These films were intended to be shown this way: in a theater, on the big screen, with an audience, and with live music. If you can put it all back together, you get a real sense of why people first fell in love with the movies," Rapsis said. 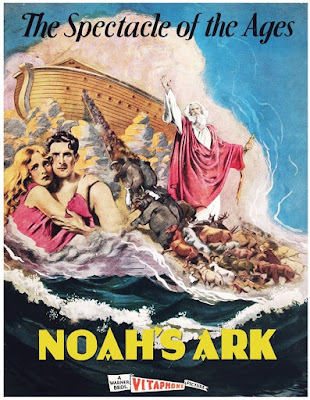