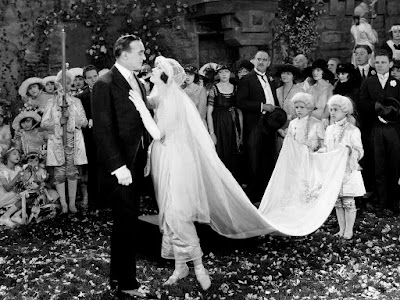 There's no silent film equivalent to 'It's A Wonderful Life' (1946), so Christmas is kind of a bust for silent film programming.

But for St. Patrick's Day, we can choose from several films that are as Irish as my great-grandfather from County Cork.

There's intense drama, such as 'Hangman's House' (1928), a dark film set in Ireland and directed by a young John Ford.

And there's comedy: Johnny Hines in 'Conductor 1492' (1924) is full of Irish ethnic humor popular at the time.

This year, for something in-between, I'm accompanying 'The Bride's Play' (1922), a costume drama starring Marion Davies. It's set in Ireland, both modern (meaning 1920s) and medieval, giving Davies a chance to play scenes (and wear outfits) from both eras.

We're screening 'The Bride's Play' on Sunday, March 14 at 2 p.m. at the Town Hall Theatre in Wilton, N.H. Lots more info in the press release, pasted in below.

But the fact that we're able to show the film at all is due to a gentleman in Maine who has taken on the task of getting the work of Davies out of the archives and making her films available for modern audiences to see.

His name is Ed Lorusso, and he's recently been in the news for his work. Check out this recent article from a Maine newspaper that explores his work. It's great that he's doing this.

For a look at specifically how 'The Bride's Play' went from the film vaults of the Library of Congress and back onto the screen, check out this blog post from silent film accompanist Ben Model, who was commissioned to create a recorded score to go with Lorusso's restoration. 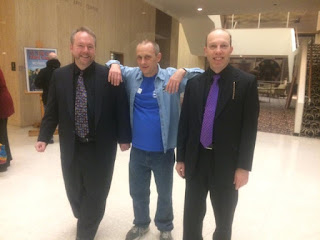 From left, that's me, volunteer Larry Stendebach, and Ben Model at the Kansas Silent Film Festival in 2017.

Speaking of music: Ben does great work, and has been especially active doing virtual live shows during the pandemic. Check out his weekly 'Silent Comedy Watch Party.' But I'll be doing my own music live for our screening next Sunday of 'The Bride's Play.'

It's surprising to many people, but most silent films do not have one "official" score, then or now. Rather, it was up to local theater musicians to come up with accompaniment that helped a film work. So the music for a film would usually be completely different from one theater to the next.

Thus is it possible for someone like Ben, or me, to create new music nearly a century after the film was released, when people who made it are long gone. But it works, I think, as long as an accompanist does what musicians back in the day would have done—try to support the film and help it work with an audience.

That's what I do. And because it implies the presence of an audience, it's what you do as well. Join me on Sunday, March 14 for 'The Bride's Play' and we'll all get in the mood for St. Patrick's Day. 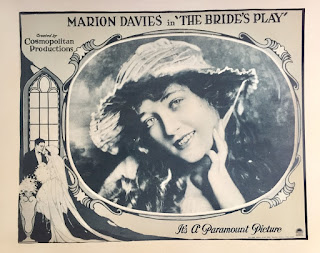 WILTON, N.H.—The ancient Irish custom of interrogating all male wedding guests highlights 'The Bride's Play' (1922), a silent romantic drama starring Marion Davies and set in the Emerald Isle.
To celebrate St. Patrick's Day, a restored print of 'The Bride's Play' will be screened with live music on Sunday, March 14 at 2 p.m. at the Town Hall Theatre, 40 Main St., Wilton, N.H.

The screening is free to the public; a donation of $10 per person is suggested to support the Town Hall Theatre's silent film series.
The Town Hall Theatre continues to observe procedures to comply with all state and CDC public health guidelines. Capacity is limited to 50 percent; patrons are required to maintain social distance and wear masks until seated.
Live music will be provided by Jeff Rapsis, a New Hampshire-based silent film accompanist.
'The Bride's Play' gives Marion Davies two roles to play: contemporary Irish lass Aileen Barrett and her distant ancestor from medieval times, the noble Lady Enid of Cashel.
On their wedding day, both carry out the Irish custom of 'The Bride's Play,' which calls for the bride to make the rounds of all male guests, asking each in turn if he is the one she loves best, until she reaches the groom.
In medieval times, this honored custom led to a scandal at Lady Enid's elaborate marriage ceremony. Now, centuries later, Aileen Barrett faces trouble with her own impending nuptials.
Carried out at her ceremony, will the ancient custom of 'The Bride's Play' reveal the identity of her true love? And will it be the man everyone expects? 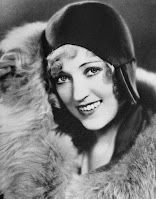 'The Bride's Play' was one of a series of lavishly produced costume dramas made by studio Cosmopolitan Pictures and financed by Davies' long-time lover, newspaper magnate William Randolph Hearst.
The film, shot on the California coast, was noted for its massive medieval castle set designed by John Urban. Directed by George Terwilliger, 'The Bride's Play' was released through Paramount Pictures.
Cosmopolitan, founded by Hearst, heavily promoted the career of Davies, who appeared in 29 silent and 17 talking films with the company.
The story for 'The Bride's Play,' like many Cosmopolitan Pictures, was originally published in Hearst's well-read newspapers and magazines.
Though popular at the box office, Davies' films were often dismissed by critics as Hearst vanity projects intended to showcase his lover in exotic tales and elaborate costumes.
Long unavailable for public viewing, in recent years, her silent films have been rediscovered as well-produced vehicles for Davies' acting talent and big screen appeal.
"Davies had an on-screen magnetism that still comes through today, a century after her career was in full swing," said Rapsis, the Town Hall Theatre's silent film accompanist. "To see a film like 'The Bride's Play' on the big screen is to understand why she was so popular."
"Plus, it's set in Ireland, so it's a fun—and Covid-19-safe—way to get in the mood for St. Patrick's Day," Rapsis said.
Rapsis improvises scores for silent films using a digital synthesizer to recreate the texture of the full orchestra.
"It's kind of a high wire act," Rapsis said. "But for me, the energy of live performance is an essential part of the silent film experience."

Irish romantic drama 'The Bride's Play' will be screened with live music on Sunday, March 14 at 2 p.m. at the Town Hall Theatre, 40 Main St., Wilton, N.H. Free admission; a donation of $10 per person is suggested to support the Town Hall Theatre's silent film series.
For more information, visit www.wiltontownhalltheatre.com or call (603) 654-3456.