At the Center for the Arts in Natick, Mass.: 'Sunrise' in late afternoon on Sunday, May 2; plus, the 'real' mystery of Paul Leni's 'The Last Warning' 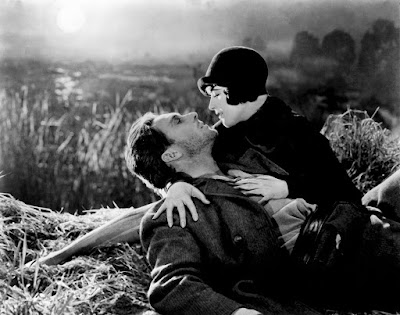 Random thoughts as we slowly emerge from the ongoing pandemic.

- At a screening of 'The Last Warning' (1928) today in Wilton, N.H., I made my usual remarks about how we'll all putting the silent film experience back together: the theater, the big screen, the live music, and the audience.

But then I added this thought, which only just occurred to me: the last major pandemic we endured was during the silent era, so we've got that going for us, too.

Well, so we do. We also have a booming stock market, so there's that, too. All we have to do now is ban alcohol and the atmosphere will be complete.

Sometimes I talk too much.

- 'The Last Warning' was our choice for the "half-way to Halloween" screening. Hey, they celebrate Christmas in July, so why not Halloween in late April?

It was the first time I've done music for 'The Last Warning,' which was certainly worth running. The last film of director Paul Leni before his untimely death, it's filled with startling images and memorable sequences.

However...the restoration Universal did in 2016 seems to be missing material that would better explain the plot.

An actor is murdered during a play and the body disappears. The theater is then closed for five years and considered haunted. Okay, I'm with you so far.

But then suddenly the theater is being opened and the cast members are rounded up for a reenactment. Great, but it's just not clear how this all comes about, why its being done, and what's at stake. 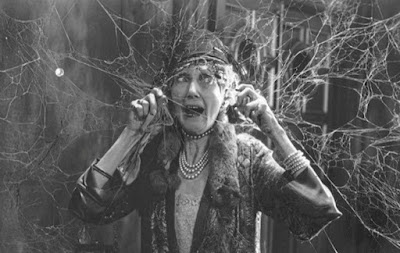 Carrie Daumery's close encounter with cobwebs makes for a memorable image in 'The Last Warning.'

Why do all the performers return to a theater when they're clearly all terrified to be there? How is it possible for the producer to be someone no one has ever heard of? And how do the detectives force the production to go on when the theater owners would clearly object? And so on.

Running times for 'The Last Warning' are listed as long as 89 minutes. The Universal restoration clocks in at 78 minutes. I know length is subject to variables such as projection speed. But from what we saw on screen this afternoon, clearly there's footage missing that might answer some of the questions.

Where it is? Perhaps that's the real mystery of 'The Last Warning.'

- I'm pleased to announce that starting in July, I'll be accompanying a new series of silent films with live music at the Rex Theatre in Downtown Manchester, N.H.

And this past week I was invited to accompany films at the recently relaunched 'Buster Keaton Celebration' next September in Iola, Kansas.

And this summer will see reinstated series (all canceled last year) at the Leavitt Theatre in Ogunquit, Maine; at Brandon Town Hall in Brandon, Vt., and other venues.

So maybe this whole pandemic thing really is loosening up. I get my follow-up Moderna shot on Thursday, May 6 but will observe precautions as long as the CDC guidance calls for it. Hope everyone stays healthy.

- Random rant: why, why, WHY does no Web site ever "remember me" despite me always checking the box when I enter my password and type in the authentication code and recite the Hebrew alphabet backwards to prove who I am?

- Next up: 'Sunrise' (1927) at the Natick Center for the Performing Arts, which I'm accompanying on Sunday, May 2 at 4 p.m. More details in the press release below.

I did this film some years ago, and the screening was attended by a friend who had somehow mixed it up with 'Metropolis,' I think. Afterwards, he asked me what kind of futuristic city has an amusement park where pigs slide down a chute?

You can see those same pigs, and a whole lot more, by seeing 'Sunrise' at the somewhat counter-intuitive time of 4 p.m. It's like showing 'London After Midnight' at high noon.

Anyway, hope to see you there! 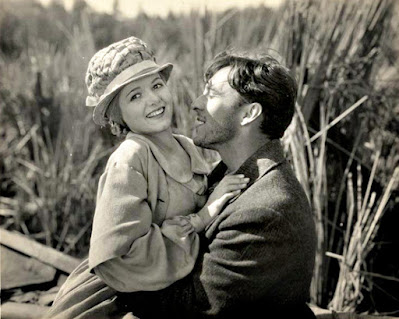 Academy Award-winning drama 'Sunrise' to be screened on Sunday, May 2 at Center for the Arts in Natick

NATICK, Mass.—Silent film on the big screen with live music returns to the Center for the Arts in Natick with the Academy Award-winning romantic drama 'Sunrise' (1927) on Sunday, May 2 at 4 p.m.

The screening of 'Sunrise,' starring Janet Gaynor and George O'Brien, will feature music by silent film composer Jeff Rapsis, who will accompany the film live at the venue, which is located at 14 Summer St., Natick.

Tickets are $18; Center for the Arts members $15, with limited seating due to Covid-19 capacity restrictions.

Gaynor, a popular female star of the silent film era, won the first-ever Academy Award for Best Actress for her performance in 'Sunrise.' The movie took top honors in cinematography and was also recognized for "Unique and Artistic Production" at the inaugural awards.

"It's a great way to follow the annual Academy Awards, which take place the week before on Sunday, April 25," said Rapsis, who creates live original scores for TCAN's silent film series. "If you've never experienced silent film with live music in a theater, 'Sunrise' is a good opportunity to check it out." 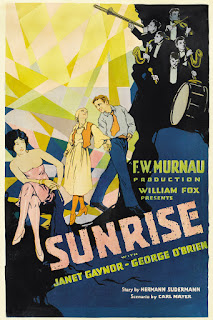 The resulting movie features enormous stylized sets that create an exaggerated, fairy-tale world. The city street set alone reportedly cost over $200,000 to build, a huge sum at the time. Much of the exterior shooting was done at Lake Arrowhead, Calif.

Full of cinematic innovations, the groundbreaking cinematography (by Charles Rosher and Karl Struss) featured moving cameras and impressive tracking shots. Titles appear sparingly, with long sequences of pure action and most of the story told in Murnau's signature visual style. The extensive use of forced perspective is striking, particularly in a shot of the city with normal-sized people and sets in the foreground and smaller figures in the background by much smaller sets.

Rapsis, who uses original themes to improvise silent film scores, said great silent film dramas such as 'Sunrise' used their lack of dialogue to create stories that concentrated on the "big" emotions such as Love, Despair, Anger, and Joy. Because of this, audiences continue to respond to them in the 21st century, especially if they're presented as intended — with a live audience and live music.

"Dramas such as 'Sunrise' were created to be shown on the big screen as a communal experience," Rapsis said. "With an audience and live music, they still come to life as their creators intended them to. So the screenings at Natick's Center for the Arts are a great chance to experience films that first caused people to fall in love with the movies," he said.