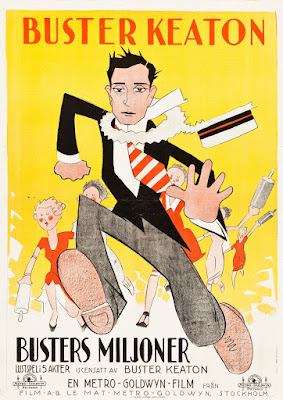 A Swedish poster for 'Seven Chances' (1925). Wow, what happened to Buster's hat?

It's a film Buster Keaton didn't really want to make. But it turned out to be among his most memorable,  thanks to a climactic sequence added only after the picture was considered finished.

It's 'Seven Chances' (1925), and the way it was put together is a great example of how things got done in 1920s Hollywood, and at the Keaton Studio in particular.

I'll accompany 'Seven Chances' on Wednesday, Aug. 4 at 7 p.m. at the Leavitt Theatre In Ogunquit, Maine. More details about the screening are in the press release below.

When introducing the film, I often relate the story of how Buster felt 'Seven Chances,' originally a stage farce, wasn't really his kind of comedy. But felt obligated to make it because his producer, Joe Schenck, had purchased the rights.

Turned into a motion picture, 'Seven Chances' originally ended with an outdoor chase: a tuxedo-clad Buster pursued across the landscape by an army of angry would-be brides.

Later in life, Keaton recalled his team feeling they had an ending that was "okay. Not a world-beater, but just okay."

But when the rough cut was previewed to a Los Angeles audience, the crew noticed something: at the very end of the chase, they audience perked up.

On screen, as Buster tumbled down a hill, he accidentally dislodged three small rocks, which started bouncing down the hill with him, as the chase faded out. "I had to scram to get out of the way," Buster recalled.

That, and the reaction it got, inspired Buster and his crew to go back create the now-legendary "rock slide" sequence, which was then spliced into the picture.

If three rocks were good, then three hundred rocks would be better!

It was improv comedy on a grand scale. And it's a great example of how Keaton's comedy was to a great extent "found" in the world around him.

No formal scripts were used, either for his short comedies or his features of the 1920s. He and his team would decide on a story, figure out how to start it, and then come up with a "finish," as shown above with 'Seven Chances.'

And then off they'd go, either in the studio or, more often, into the streets of Los Angeles or the surrounding California countryside. As Buster said late in life, "We figured the middle would take care of itself."

Of course there had to be a certain amount of preparation, especially when the story was set in a historical period. 'The General' (1926), with its minutely detailed costumes, locales, and props from the Civil War era, did not happen by accident.

But the comedy often did.

This Wednesday's screening of 'Seven Chances' won't happen by accident: it's at 7 p.m. at the historic Leavitt Theatre in Ogunquit, Maine. The venue opened in 1923 as a silent movie house, and remains largely intact.

It's likely that 'Seven Chances' played there in the summer of 1925. And if it didn't, then we'll remedy that on Wednesday night. Hope to see you there! 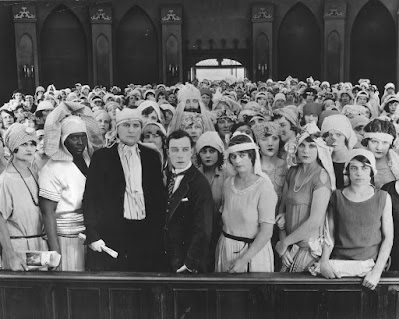 Buster in 'Seven Chances.' I've always been intrigued by the bearded bride in the center of the crowd.

Admission is $12 per person. Live music for the movie will be provided by silent film accompanist Jeff Rapsis.

Buster's hurried attempts to tie the knot on his own go awry. But then a newspaper story changes the game, creating an avalanche of would-be brides who relentlessly pursue Buster as he searches for his one true love before the deadline.

The historic Leavitt Theatre opened in 1923 as a summer-only silent movie house. Now approaching 100 years of operation, it continues to show movies, but also functions as a restaurant, bar, and lounge.

In reviving Keaton's 'Seven Chances,' the Leavitt Theatre aims to show silent film as it was meant to be seen—in restored prints, on a large screen, with live music, and with an audience.

Buster Keaton's 'Seven Chances' (1925) will be screened with live music on Wednesday, Aug. 4 at 7 p.m. at the Leavitt Theatre, 259 Main St., Route 1 in Ogunquit. Admission $12 per person; tickets available at the door.