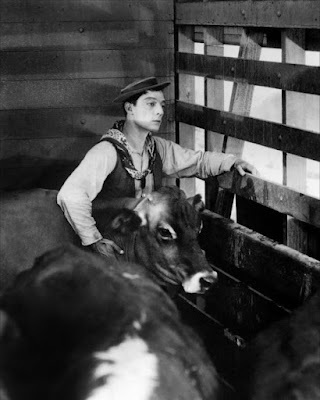 Today's forecast: cloudy with rain possible at any time. In other words, perfect movie weather!

So come on over the Town Hall Theatre in Wilton, N.H., where this afternoon we're finishing up a summer-long series of silent Westerns with a dose of comedy.

Also, we'll run what's left of 'Womanhandled' (1925), a Richard Dix comedy that survives only partially but I think holds up really well. Come and we'll find out together.

The show starts at 2 p.m. See you there! 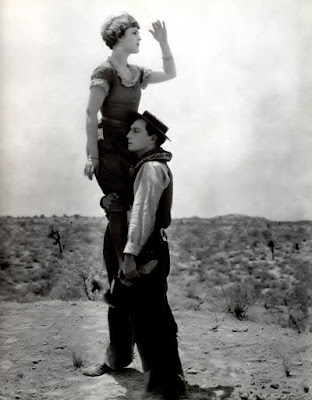 "After a season filled with intense dramas, we figured we'd finish our western series with something lighter— a comedy," Rapsis said. 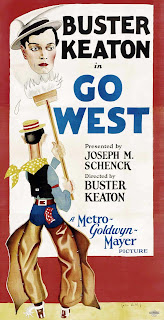 In 'Go West,' Buster heads out to ranch country, where the stone-faced comedian encounters romance in a highly unusual way.
Rustle up some belly laughs as Buster must once again prove himself worthy to all those who doubt him.

'Go West' was an unusual film for Keaton. With its portrayal of a down-and-out wanderer who becomes a reluctant hero, 'Go West' could have been a vehicle for Charlie Chaplin’s Little Tramp.

The film was praised by critics and did well at the box office, but today is lesser known than Keaton classics such as 'The Navigator' (1924) and 'The General' (1926).

Co-starring in 'Go West' is a mourn-faced cow named Brown Eyes, with whom Keaton worked extensively prior to the filming.
Brown Eyes received a credit in the movie, and even got a salary of $13 a week for her acting.

Much of 'Go West' was shot on location in Kingman, Ariz., during the summer of 1925, in temperatures approaching 120 degrees.

For more information, visit www.wiltontownhalltheatre.com or call (603) 654-3456. For more about the music, visit www.jeffrapsis.com.