It's a world threatened by pandemic, climate change, and pharmaceutical commercials! What we need is a good old-fashioned Hollywood religious epic to give us hope.

And we'll get just that tonight (Thursday, Aug. 5) with the original silent version of 'Ben Hur' (1925) at the Flying Monkey Moviehouse and Performance Center in Plymouth, N.H.

The journey starts at 6:30 p.m. More details in the press release below. See you there! 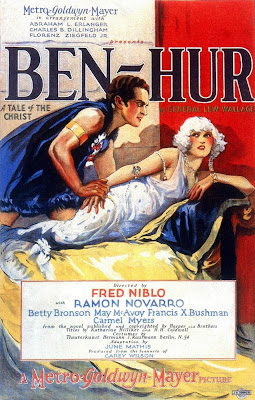 An original poster for the original silent version of 'Ben Hur' (1925).

PLYMOUTH, N.H.—One of early Hollywood's greatest epics returns to the big screen with a showing of 'Ben Hur, A Tale of The Christ' (1925) on Thursday, Aug. 5 at 6:30 p.m. at the Flying Monkey Moviehouse and Performance Center, 39 South Main St., Plymouth.

Admission is $10 per person, general admission. Tickets are available online at flyinghmonkeynh.com or at the door.
The silent version of 'Ben Hur' was originally slated for a screening earlier this year at the Flying Monkey, but was postponed to Thursday, Aug. 5.

'Ben Hur,' starring Ramon Novarro and Francis X. Bushman, was among the first motion pictures to tell a Biblical-era story on a large scale.

The film, which helped establish MGM as a leading Hollywood studio, employed a cast of thousands and boasted action sequences including a large-scale sea battle.

The film is highlighted by a spell-binding chariot race that still leaves audiences breathless with excitement. 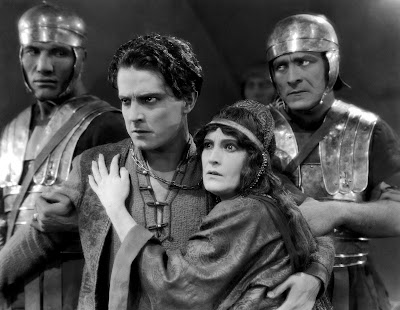 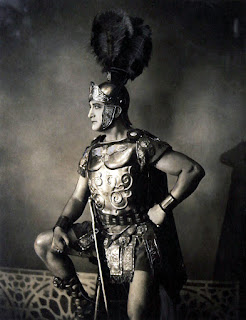 Besides Novarro in the title role, the film stars Francis X. Bushman (at right) as Messala, the Roman soldier who imprisons the Hur family; Betty Bronson as Mary, mother of Jesus; May McAvoy as Ben Hur's sister Esther; and Claire McDowell as Ben Hur's mother.

The film was remade by MGM in the 1950s in a color and wide-screen version starring Charleston Heston that garnered 11 Academy Awards. Some critics believe the original 1925 version offers superior drama and story-telling.

'Ben Hur, A Tale of The Christ' (1925) will be shown on  Thursday, Aug. 5 at 6:30 p.m. at the Flying Monkey Moviehouse and Performance Center, 39 South Main St., Plymouth, N.H. Admission is $10 per person general admission. Tickets are available online at flyingmonkeynh.com or at the door. For more information, call the Flying Monkey at (603) 536-2551.