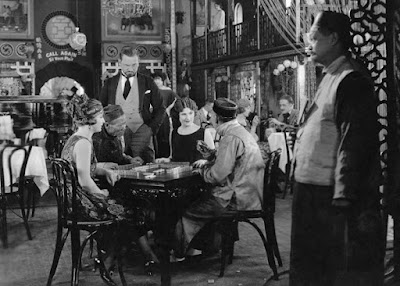 A scene from Universal's 'Drifting' (1923), which kicked off a Tod Browning retrospective this month at the Town Hall Theatre in Wilton, N.H.

Lots to catch up on: the start of a Tod Browning series, the reborn Buster Keaton Celebration in Iola, Kansas, and a whole heap of Halloween screenings on the horizon. Here goes!

Our screening of Tod Browning's crime drama 'Drifting' (1923) on Sunday, Sept. 19 attracted a good-sized audience (for us) of about 40 people.

That was unexpected because a) it was a beautiful sunny day, the last Sunday of summertime, and b) 'Drifting' is a film that most people have never heard of.

Yes, Wallace Beery is in it, and also very young Anna May Wong. Neither are exactly Charlie Chaplin or Gloria Swanson in the name recognition department, so I wasn't anticipating a crowd.

But in putting together the Town Hall Theatre's Tod Browning mini-series (six films over two months, culminating in some rarely screened Lon Chaney titles for Halloween), I wanted to run at least a couple of obscurities to see how his early work holds up on the big screen and with an audience present.

At the time, both films were relatively high profile Universal releases. 'Drifting' boasted a huge budget, which showed on screen in the form of enormous battle scenes staged on a massive scale. 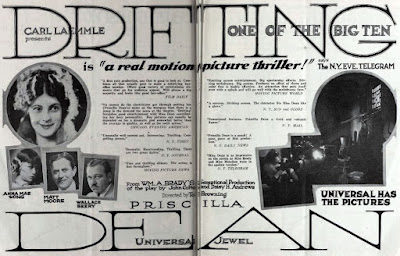 It was recognizable as a Browning film by virtue of the exotic setting, criminal story, and intense melodramatic byplay among the characters. And the good news is: it really held the screen!

You could tell: despite the melodrama (or perhaps because of it), the audience was, er, never adrift. Interest was so intense that afterwards, nearly everyone stayed for almost a half-hour of discussion and Q & A, even with the sun still shining outside.

One element that made the film feel surprisingly relevant after nearly a century: if you took the word "opium" and substituted either "Fentanyl" or "OxyContin," you'd have a morality play that could really  resonate today. (For added impact, change some of the character names to "Sackler.")

Getting high marks from everyone was lead female Priscilla Dean. Her "take no shit from anyone" attitude was really impressive. Though not well known today, she frequently worked with Browning, and in fact co-stars in 'White Tiger' up next. If you missed your chance to rediscover Dean, you'll have another chance in October.

(Actually, you'll have than one chance, because she appears in one of the Chaney films, 'Outside the Law' (1920), which we're screening on Saturday, Oct. 30.)

Finally: my favorite comment was from a gentleman I'd never seen before at any silent film screenings. After the Q & A finished, he came up to me and said: "You know, I enjoyed that a lot more than I thought I would."

High praise! But then I didn't think to inquire about exactly how low his expectations were.

Okay, this has gone on longer than expected. I'll get to Iola and other things in a follow-up post.

Our Tod Browning series continues on Sunday, Oct. 10 with 'White Tiger' (1923), a crime drama that also has superb comedian/actor Raymond Griffith in the cast. More info in the press release below. And I'll have to save my account of the reborn Keaton Celebration in Iola, Kansas for another post... 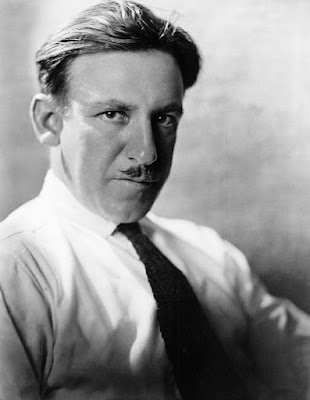 Two-month retrospective continues through Halloween: next up, thriller 'White Tiger' (1923) on Sunday, Oct. 10 with live music

But long before those macabre masterpieces, director Tod Browning pushed the boundaries of cinema while developing his craft during the silent era.

Browning's early work is being highlighted in a two-month series of rarely screened silent feature films at the Town Hall Theatre, 40 Main St., Wilton, N.H.
The series continues on Sunday, Oct. 10 at 2 p.m. with 'White Tiger' (1923), a crime drama about a gang that uses a chess-playing device to swindle unsuspecting wealthy victims. The film stars Priscilla Dean, Raymond Griffith, and Wallace Beery.
The screenings are free and open to the public; a donation of $10 per person is suggested to support the Town Hall Theatre's silent film programming.

"These early pictures from Tod Browning will change your mind about silent cinema," Rapsis said. "When shown in a theater with live music and an audience, the early Browning pictures really leap to life. They're a terrific example of why people first fell in love with the movies."

• Friday, Oct. 29 at 7:30 p.m.: Lon Chaney in 'The Blackbird' (1926). Bizarre melodrama in which Chaney leads a double life as a criminal mastermind of the London slums and also the Bishop, his pious but deformed brother. Will the entrance of a new woman expose his secret?

• Saturday, Oct. 30 at 2 p.m.: Twisted Halloween Weekend Double Feature. Lon Chaney stars in a pair of Browning-directed crime melodramas. 'Outside the Law' (1920) features Chaney as a gangster who frames a former rival and turns his young daughter to a life of crime. In 'The Unholy Three' (1925) Chaney is a criminal ventriloquist who runs a pet store that fronts a masterful scheme for fleecing wealthy customers.

• Sunday, Oct. 31 at 2 p.m.: Lon Chaney in 'Where East is East' (1929). Chaney, as "Tiger Haynes," a jaded animal trapper in the jungles of Laos, cares only for his young daughter, Toyo, who plans to marry a circus owner's son. But the couple's happiness is threatened by the appearance of a mysterious woman.

As a child, Browning was fascinated by circus and carnival life. Before finishing high school, at age 16 he ran away from his well-to-do family to join a traveling circus, from which he never returned.

By 1901, at the age of 21, Browning was performing song and dance routines on riverboats plying the Ohio and Mississippi rivers, as well as acting as a contortionist for the Manhattan Fair and Carnival Company.

Browning developed a live burial act in which he was billed as "The Living Hypnotic Corpse," and performed as a clown with the Ringling Brothers circus. He would later draw on these early experiences in his filmmaking.

During this time he showed his fascination with the macabre by adopting the professional name 'Tod,' after the German word for 'Death.'

In 1915, Browning was severely injured when a car he was driving collided with a railroad locomotive. According to biographers David J. Skal and Elias Savada, the tragic event transformed Browning's creative outlook:

"A distinct pattern had appeared in his post-accident body of work, distinguishing it from the comedy that had been his specialty before 1915. Now his focus was moralistic melodrama, with recurrent themes of crime, culpability and retribution." 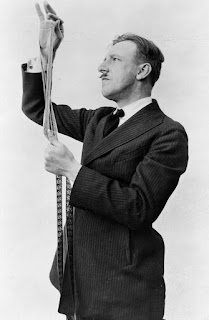 Although Browning continued to work into the 1930s, alcoholism contributed to his career gradually halting. He retired from motion pictures in 1942, and died a recluse in 1962.

Over time, critics have come to recognize Browning's distinctive contributions to cinema, especially in his silent-era collaborations with Chaney at MGM from 1925 to 1929. Today his films are regarded as a unique body of work that reflect Browning's singular vision and outlook on life.

Accompanist Jeff Rapsis, who will provide music for all films in the series, improvises live scores for silent films using a digital synthesizer to recreate the texture of the full orchestra.