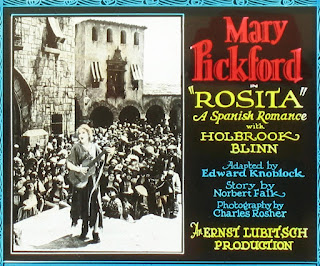 Yes, 'Rosita' was directed by that Ernst Lubitsch, who was making his U.S. debut.

And we now switch from medieval England (last night's screening of 'Robin Hood') to medieval Spain, the setting for Mary Pickford's costume drama 'Rosita' (1923), which I'm accompanying today at 2 p.m.

The 'Rosita' screening launches a summer series of programs spotlighting women of the silent era.

Some, such as Pickford and Gloria Swanson, are still well known even today.  Others are now forgotten—any members of the Mae Marsh Fan Club out there?

Well, they'll all return to the big screen this summer at the Town Hall Theatre in Wilton, N.H., where six programs and eight features are slated through August.

The one thing to mention about 'Rosita' is that it's based on an obscure 19th century opera, 'Don César de Bazanset,' and set in Seville, Spain — just like a certain other opera featuring a barber in the title.

Another opera set in Seville is Bizet's 'Carmen,' so it's interesting to learn that in 'Rosita,' the title character's mother is named...Carmen!

This Carmen, however, has little in comment with the other opera's sexy gypsy girl.

In 'Rosita,' Carmen is a middle-aged housewife built like a fire plug and plagued by three noisy brats and a lazy husband who spends most of the film either in a hammock or in bed.

Could 'Rosita' be an alternative history version of 'Carmen?' What if, instead of dying at the end of the opera, she went on to live a full life? And this is how it turned out?

Well, I hope you'll think about swinging over to the Town Hall Theatre this afternoon, to take in Mary Pickford playing a guitar-wielding street singer in 'Rosita.'

More details about today's screening are in the press release: 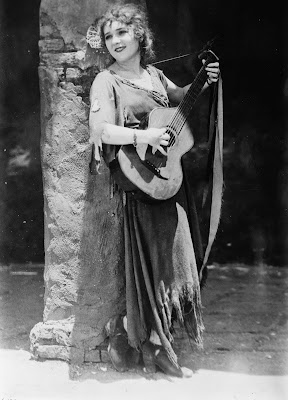 'Rosita,' a big budget picture based on the opera 'Don César de Bazan,' finds Pickford playing the title character, a Spanish street singer during the reign of King Charles II.

Pickford's mockery of King Charles gets her into hot water—until the lecherous King finds himself attracted to the decidedly un-royal singer.

'Rosita' marked a departure for Pickford, who had built her career playing ingenue roles. 'Rosita' was the first time she'd played a full-fledged adult character.

'Rosita' launches a series of six programs this summer in which eight full-length features will be screened, all with live music by accompanist Jeff Rapsis.

• Sunday, June 19 at 2 p.m.: 'Mickey' featuring Mabel Normand. Comic legend Mabel Normand stars in a rare 1918 comedy/drama playing an unsophisticated miner's daughter sent East to live with an aunt, causing no end of chaos—and leading to a lot of romance, too.

• Sunday, July 24 at 2 p.m.: Norma Talmadge in 'Within the Law.' Silent screen dramatic star Norma Talmadge plays a shopgirl wrongly imprisoned, and bent on revenge against the man who wronged her in this vintage 1923 release. Filmed on location in New York City.

‘Rosita’ (1923) starring Mary Pickford, the first program in a three-month series featuring women of the silent screen, will be shown with live music on Sunday, June 12 at 2 p.m. at the Town Hall Theatre, 40 Main St., Wilton, N.H.