Set sail with Douglas Fairbanks Sr. in 'The Black Pirate' on Wednesday, June 8 in Plymouth, N.H. 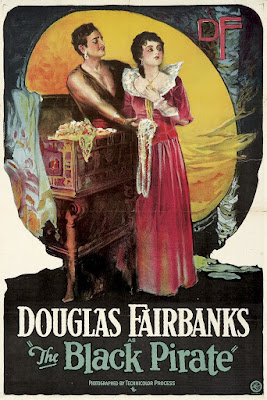 I'm back at the keyboard after a twice-postponed visit to London, with a side trip to my old stomping grounds of Glasgow, Scotland.

Next up: music for 'The Black Pirate' (1926) starring Douglas Fairbanks, which is screening on Wednesday, June 8 at 6:30 p.m. at the Flying Monkey Moviehouse and Performance Center in Plymouth, N.H.

More info and details are in the press release below. First, a few notes from "across the pond," where last week we scored a rare "triple," meaning three West End shows in one day.

- At 2 p.m., a new production of 'My Fair Lady' at the Coliseum on Charing Cross Road.

- At 5:30 p.m., a cabaret-style revue called 'Six' that features the wives of Henry VIII, and which is playing at the Vaudeville Theatre at the Strand.

- At 7:30 p.m., the new musical version of 'Back to the Future' that's playing at the Adelphi next door.

We didn't plan on this — it just happened. Tickets were available for all three;  the theaters were close enough for this to work, and there was that unusual 5:30 p.m. matinee of 'Six.'

We even got something to eat between 'Six' (which is just over one hour long) and 'Back to the Future.'

The last time this happened was way back in the 1990s, when we caught a weird one-man play called 'Anorak of Fire' at an odd time, with a matinee before it and an evening show afterwards. So it's a rare bird indeed.

About 'Back to the Future': what was interesting to me was that even though it was full of new songs, much of the material was drawn from the score that Alan Silvestri composed for the 1985 film.

There are a couple of really enduring licks in the 'Back to the Future' score, and Silvestri (who also worked on the musical) made the most of them in this stage reinterpretation.

The result was something you don't see very often: a stage musical that heavily relied on strong background music in the same way a movie action sequence might do. (Or, yes, a silent film score!)

This was especially true in the musical's Act 2, when Marty McFly must get the time-traveling DeLorean up to 88 mph just as lightning strikes the town's clock tower.

With no songs, just action and Silvestri's music galloping along, I totally, totally bought into it. And it was the music that did it, I think.

The time-traveling car may have been powered by plutonium. But the real energy that held everything together and pushed it forward in an edge-of-your-seat frenzy was the score.

So even though we were watching a stage production in 2022, it reminded me how much the right kind of music can add to a scene or sequence in a movie made in 1922. The challenge (for me, anyway) is to find those moments and make the most of them, and not overdo it at other times.

I'll next get a chance to find the balance this Wednesday, as we set sail with Douglas Fairbanks in 'The Black Pirate' (1926) at the Flying Monkey Moviehouse and Performance Center.

Press release is below. See you on deck! 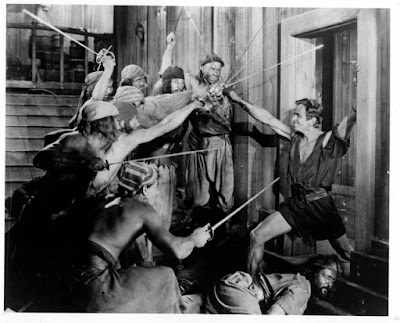 PLYMOUTH, N.H.—He was the Indiana Jones of his day, thrilling early film-goers with amazing stunts and feats of heroic derring-do.

He was Douglas Fairbanks Sr., one of Hollywood’s first megastars, and his timeless charisma can be seen again on Wednesday, June 8 at the Flying Monkey Moviehouse and Performance Center in Plymouth, N.H.

Featured attraction in June for the theater's monthly silent film series is ‘The Black Pirate’ (1926), an epic swashbuckling tale of the high seas that proved one of Fairbanks’ most popular blockbusters. The forerunner of all pirate movies, it was also one of the first Hollywood films to be released in color.

Showtime for 'The Black Pirate' is Wednesday, June 8 at 6:30 p.m. at the Flying Monkey Moviehouse and Performance Center, 39 Main St., Plymouth, N.H. General admission is $10 per person.

The screening, the latest in the Flying Monkey's silent film series, will feature live accompaniment by Jeff Rapsis, a New Hampshire-based composer who specializes in creating scores for silent films.

'The Black Pirate' tells the story of a ship's passenger (Douglas Fairbanks) who survives a pirate raid. Sworn to avenge his dead father, he takes command of the pirates responsible, and secretly strives to free the princess whom they have kidnapped.

When the silent film era ended in 1929, an aging Fairbanks found he was less enthusiastic about the effort required to make movies and retired from the screen. He died in 1939 at age 56 after suffering a heart attack; his now-famous last words were, “I’ve never felt better.”

The Fairbanks feature is the latest in a series of monthly silent film screenings at the Flying Monkey. The series aims to recreate the lost magic of early cinema by assembling the elements needed for silent film to be seen at its best: superior films in best available prints; projection on the big screen; live musical accompaniment; and a live audience.

For each film, Rapsis improvises a music score using original themes created beforehand. None of the music is written down; instead, the score evolves in real time based on audience reaction and the overall mood as the movie is screened.

‘The Black Pirate’ (1926) starring Douglas Fairbanks Sr. will be shown with live music on Wednesday, June 8 at 6:30 p.m. at the Flying Monkey Moviehouse and Performance Center, 39 Main St., Plymouth, N.H.