Tonight: Halloween screenings continue with 'The Cat and the Canary' in Manchester, N.H. 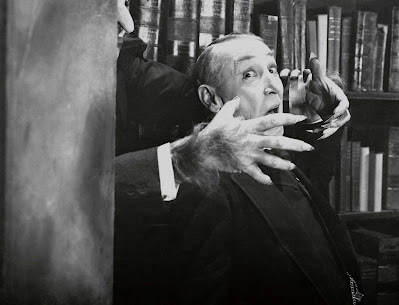 Character actor Tully Marshall faces peril in 'The Cat and the Canary' (1927).

'Tis the week before Halloween, and the silent film screening calendar is as packed as a medieval graveyard after the plague.

Next up: the 1927 comedy thriller 'Cat and the Canary' tonight (Wednesday, Oct. 26) at the Rex Theater in downtown Manchester, N.H.

Showtime is 7 p.m. Lots more info in the press release below.

From now through Halloween, the screenings are continuous, with at least one each day—and in the case of Saturday, Oct. 29, three!

Really—this coming Saturday it's 'Nosferatu' at 2 p.m. at the Park Theatre in Jaffrey, N.H.; then 'Der Golem' at 6 p.m. the Leavitt Theatre in Ogunquit, Maine; and then the reconstructed 'London After Midnight' for, yes, a midnight showing at the Coolidge Corner Theater down in Boston.

Three screenings in the span of 12 hours might seem like a lot, but I appreciate the interest at this time of year. Something about Halloween brings out people to silent film screenings.

So as a silent film accompanist, I'm willing to make hay while the sun shines, although that's a terrible expression to use regarding Halloween, which is about anything but sunshine.

The story this year is, of course, 'Nosferatu' and the 100th anniversary of the film's original release. In the two weeks prior to Halloween, I'm accompanying a half-dozen screenings in four different states! 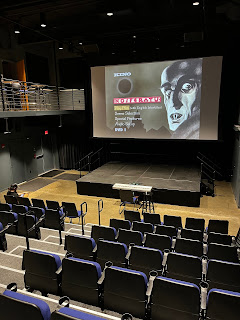 The most recent was last night in Keene, N.H., at the Colonial Theatre's new "Showroom" venue. (That's it at left, prior to the screening.) Despite it being a Tuesday night, a near-capacity crowd turned out to experience 'Nosferatu,' with many first-timers in the audience.

Last week, I accompanied the film in Natick, Mass. and Brandon, Vt. On Thursday, I'll do it again in Newport, R.I.  No matter how many times I accompany it, the film never seems to get old—kind of like the vampire himself. 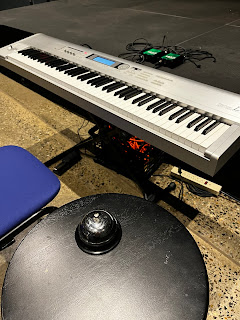 The one special effect I use in scoring 'Nosferatu' is what I call a "dingy bell," which I employ to match the scenes of a clock chiming during the movie.

Two such scenes appear in the movie, and it's a bit tricky because each time, the chiming starts off screen. The characters hear it, and only then does the camera show the clock, which both times is striking midnight.

In order to make it work exactly, you need to know when to start the chiming (in my case, hitting the dingy bell) in order for it to add up to 12. After so many times, I'm usually able to do it exactly, but I'm always on edge in the moments leading up to it.

I happened to nail it last night, as I learned from the father of a young boy who attended. Afterwards, he said his son was most impressed with how I matched the bell hits to the on-screen action.

Hope to see you at 'Cat in the Canary' tonight, or at any of the upcoming Halloween shows. Check the "Upcoming Silent Film Screenings" link at upper right for the full slate. 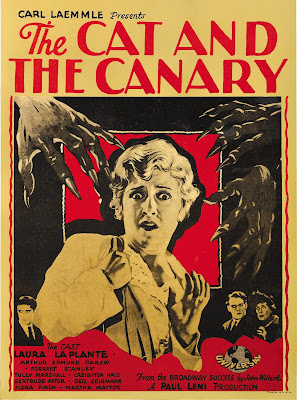 MANCHESTER, N.H.—'The Cat and the Canary' (1927), a haunted house thriller from Hollywood’s silent film era, will be screened with live music on Wednesday, Oct. 26 at 7 p.m. at the Rex Theatre, 20 Amherst St., Manchester, N.H.

The show is the latest in the Rex Theatre's silent film series, which gives audiences the opportunity to experience early cinema as it was intended: on the big screen, with live music, and with an audience. 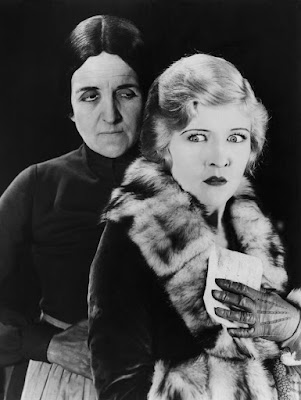 Martha Maddox and Laura LaPlante in 'The Cat and the Canary.'

Created for Universal Pictures by German filmmaker Paul Leni and based on a hit stage play, 'The Cat and the Canary' proved popular enough to inspire several remakes, including one starring Bob Hope. It was also the forerunner of all the great Universal horror classics of the 1930s and '40s.

The Rex Theatre screening will use a fully restored print that shows the film as audiences would have originally experienced it. 'The Cat and the Canary' will be accompanied by live music by New Hampshire composer Jeff Rapsis, who specializes in silent film scoring.