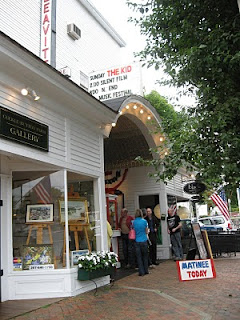 Aided by rainy weather, we enjoyed a healthy turnout of about 100 people for our first-ever silent film screening at the amazing Leavitt Theatre, a summer-only moviehouse that remains virtually unchanged from the day it opened in 1923. With a light rain falling, some folks found a 2 p.m. matinee more appealing than yet another afternoon on the beach.

The program featured two shorts: Keaton's knockabout 'Neighbors' (1920), and 'Mighty Like a Moose; (1926) with Charley Chase. I've been programming these shorts at many venues this summer because they show two very different kinds of silent film comedy, and also because both are surefire laugh-producers.

Keaton's 'Neighbors' is a surprise because it's not regarded as one of his best shorts: I never thought of it in the same league as, say, 'Cops' or 'One Week.' But when we screened it a couple of years ago, reaction was huge, and so I've continued to use it as a surefire program opener. The situational farce of Chase's 'Moose' comedy makes for a good contrast, and also produces big laughs.

Today's main attraction, Chaplin's 'The Kid' (1921), went really well, with a strong audience reaction including spontaneous applause when Chaplin leaps into the truck to battle the orphanage official. I love doing this film, in part because the dramatic opening sequence lends itself to fairly somber music, which in turn sets up the comedy perfectly. It goes way beyond what could be done in one- or two-reeler, and all this provides for rich opportunities for music to help tell the story.

And the score came together nicely, even in spite of the slight handicap of not being able to see the keyboard in front of me because it was below the lip of the Leavitt's small stage, meaning no ambient light from the screen could find it. Though I try to keep one eye on the screen at all times, passages that include wide skips or other digital derring do (meaning relating to fingers) require me to glance down at the keys. And when I can't do that, it creates some limits to the performance. Gotta remember to bring that piano light!

Nice touch: Following the show, I got my first-ever standing ovation. Well, it was only a partial one, but still nice to see. Thanks, Ogunquit. Our next screening there will be Sunday, Sept. 12, when we'll do a program highlighted by Keaton's feature 'College' (1927).
Posted by Jeff Rapsis at 9:42 PM