Report from 'The Strong Man' in Wilton, N.H. 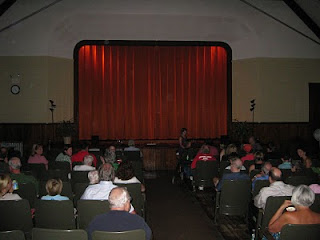 What a wonderful time at the movies! On a beautiful Sunday summer afternoon, about 100 people of all ages assembled to share the silent film experience. It was Sunday, Aug. 29 and the place was the Wilton (N.H.) Town Hall Theatre. And this was one of those times when it all fell into place -- the movies were great, the reaction was strong, the music came out well, and I even managed to keep my opening comments somewhat brief!

Really, I can't explain it, but sometimes everything all just comes together. Our first short, Keaton's 'The Goat,' was met with gales of laughter; likewise Chaplin's Mutual short 'The Pawnshop.' 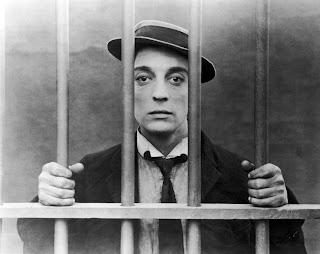 For both I used an organ setting and the music came naturally; the Keaton film is one long chase, but the little islands where the action slows down a bit provide some wonderful opportunities for contrast. Musically, things worked out especially well in the scene where Keaton faces the detective/father over dinner at his girlfriend's house; I was able to build a series of chords over a slowly rising bass that created a great deal of tension. When Keaton finally makes his leap through the transom, the audience erupted with shouts and applause. 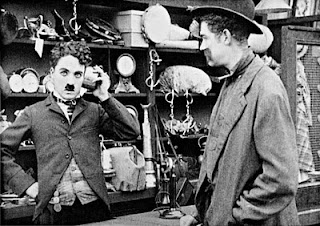 The Chaplin film is a great one for music (all the Chaplin Mutuals are, really) because it's full of scenes where good underscoring can really help the comic effect, I think. I'm pleased to say I hit the mark on this one, most satisfyingly in the prolonged "clock" scene, in which a sly little melody over a steady accompaniment traveled through the entire circle of fifths by the time the take was over. (I remember being astonished at the length of this famous take when screening my 8mm print of 'The Pawnshop' as a teenager; it still astounds me today.)

I've never been quite sure what to say about Harry Langdon, but for this screening I finally came up with something that seemed to click. I used to own a German shepard, and when it was a really hot night, the dog would go upstairs into the bathroom and climb in the tub and stare at the faucet, hoping that nice cold water would come out. That's kind of how Harry's character interacted with the world. 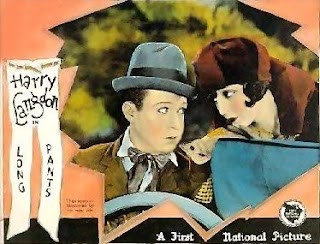 Still, reaction to 'The Strong Man' was a bit tentative at first. Things warmed up a bit during the Ellis Island scene, and then really came to life in the 'Harry carries the woman upstairs' scene. After that, the audience was with Harry all the way; when he rubs limburger cheese on his chest, the audience just howled and howled. (Though I have to say, he held that close-up of himself awfully long before we get the "I'm starting to smell" title.)

Materials for this score included a strong-man-type theme I've used in the past, a "feminine" romantic melody for Harry's interaction with Mary Brown, and various takes on 'Onward Christian Soldiers,' the hymn that plays an important part in the action. I was pleased at how it all held together, and I was even able to punctuate all the cannon shots with bass drum/cymbal crashes that were really effective, I thought.

In preparing this, I learned that Langdon himself suggested that the George M. Cohan tune "For It Was Mary" be used as the main theme for 'The Strong Man,' something I don't think works at all. It trivializes the woman's character and undermines the story's overall dramatic impact. Also, a soft lilting melody like that isn't very versatile in terms of being transformed to communicate other motions; no matter what, it can't help being that cute little tune that calls attention to itself.

So I didn't go there, and I think it allowed the film's characters to breathe a bit more freely, and also for the story's drama to boil a little hotter. And yes, the crowd cheered when the saloon proprietor landed in the trash can, and again when the walls came a-tumbling down and "Holy" Joe Brown yelled for the crowd to chase the money-changers from the temple!

Langdon doesn't always produce strong reactions. But we had a strong reaction to 'Tramp Tramp Tramp' (1926) last year, and now again for 'The Strong Man' (1926). So I'm here to testify (in the manner of Holy Joe) that 85 years since they were released, Langdon's starring features can and do stand up as real crowd-pleasers.

Just keep thinking of that German shepherd sitting in the empty bathtub.
Posted by Jeff Rapsis at 9:19 PM