Here's a release with info about this week's screening at the newly renovated Flying Monkey Movie House and Performing Arts Center in Plymouth, N.H., a facility with one of the coolest names I've encountered yet.

PLYMOUTH, N.H.—The silent film era returns to the big screen at the newly reopened Flying Monkey Movie House and Performing Arts Center in Plymouth, N.H. with the screening of a classic silent comedy and short subjects, all accompanied by live music. 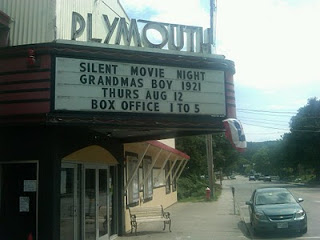 Showtime is Thursday, Aug. 12 at 7 p.m. All are welcome to this family-friendly event; admission is by donation. Proceeds will be used to support programming at the Flying Monkey, formerly known as the Plymouth Theatre prior to its recent refurbishment and reopening.

Live music will be performed by Jeff Rapsis, a New Hampshire-based composer who specializes in scoring silent films and accompanies screenings throughout New England. Using original themes created beforehand, Rapsis improvises the music live as the films are shown.

The silent film program will showcase the Flying Monkey Movie House and Performing Arts Center, which reopened in July after extensive renovations under the direction of Alex Ray, who purchased the facility at auction last year.

Other silent films with live music are scheduled through December at the Flying Monkey, with screenings scheduled every second Thursday night of the month. Upcoming films include Buster Keaton in 'College' (1927) on Thursday, Sept. 9 and Charlie Chaplin in 'The Kid' (1921) on Thursday, Oct. 14.

Silent film programs will be shown at the Flying Monkey on the second Thursday of each month.

"It's a great resource for the community, and especially Plymouth State University, to have these films available to the public, so they can be experienced as they were intended," said Lisa Lovett, the Flying Monkey's general manager. "It also keeps us in touch with the venue's long history as an active movie theater."