And here's a release about a screening that's coming up in Ogunquit, Maine at a theater that's been running movies since 1923...

OGUNQUIT, Maine—A local movie theater that opened its doors in the silent film era will once again host the screening of motion pictures made before Hollywood learned to talk. 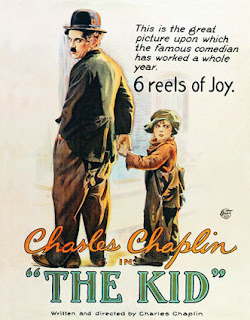 Charlie Chaplin stars in the silent film blockbuster 'The Kid' (1921), to be screened with live music on Sunday, Aug. 22 at 2 p.m. at the historic Leavitt Theatre, 259 Main St./Route 1 in Ogunquit Village, Maine.

Admission is $5 per person. The program, which includes several short silent comedies, will be accompanied by silent film musician Jeff Rapsis. Live music was an essential part of the silent film era until talking pictures arrived at the end of the 1920s.

'The Kid,' hailed as Chaplin's first full-length masterpiece, follows the story of a tramp who attempts to raise an orphaned boy on his own. 'The Kid' took the comedian a year and a half to make and attracted huge crowds when finally released. The role of the orphan, played by five-year-old Jackie Coogan and directed by Chaplin, is often cited as one of the top child performances in the history of cinema.

'The Kid,' at the time a daring mixture of comedy and drama, established Chaplin as one of the world's foremost filmmakers, and paved the way for other great comedies of the silent era.

"Chaplin's 'The Kid' is a terrific introduction to silent film for modern-day audiences," said Rapsis, who has frequently accompanied the picture. "It contains some great comedy, but also some emotionally moving scenes that still pack a wallop even today."

The screening at the Leavitt seeks to recreate the conditions that silent film was made for: best-possible quality prints projected on the big screen in a real theater, with supportive live music and a live audience.

"All these elements are important for the films to be seen as they were intended," Rapsis said. "They were designed as communal experiences, to be seen with an audience, and the larger the better. Under the right conditions, silent films such as 'The Kid' can still really come to life in a way that recaptures the magic of the early movies, and which is unlike the experience of watching a contemporary Hollywood picture."

The Leavitt Theatre, a seasonal one-screen moviehouse, opened in 1923 and has remained largely unchanged ever since, a rarity in the movie exhibition business. Economic pressures forced most vintage theaters to close long ago or convert to multi-screen facilities to survive. 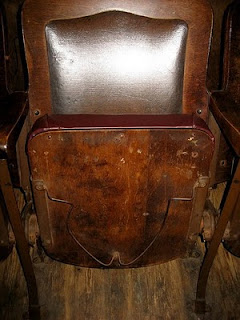 But the Leavitt has endured, and continues to show first-run films during Ogunquit’s busy summer season. Though it contains modern projection and sound equipment, much of the facility is unchanged from when the Leavitt opened, including the wooden seats, some of which are complete with wire loops underneath so gentlemen could stow their hats.

Holders of ticket stubs from the recent production of 'Sunset Boulevard' will receive two-for-one admission to the Aug. 22 screening.

“With so many people seeing 'Sunset Boulevard' at the Ogunquit Playhouse, we thought audience members might appreciate a chance to see an actual silent film program in a historic theater such as the Leavitt, right here in town,” Rapsis said.

"Unless your heart is as stony as a biblical execution, I challenge you to watch unmoved as Charlie Chaplin's heroic vagabond rescues five-year-old Jackie Coogan from being hauled away to the orphan asylum."
– Mark Bourne, DVD Journal
Posted by Jeff Rapsis at 7:26 PM