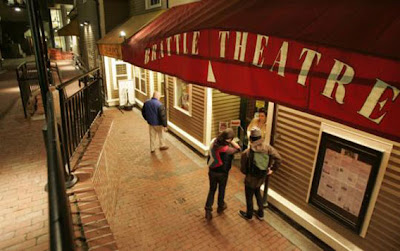 I'm thrilled to report that on Wednesday, Oct. 12, I'll be doing live music for a screening of the original silent film version 'Peter Pan' (1924) at the Brattle Theater in Cambridge, Mass. Show starts at 8 p.m., and is part of the theater's three-day festival of fantasy films involving either Peter or Alice, as in Wonderland.

If you're not familiar with the New England cinematic landscape, let me tell you that the Brattle is the really, really big time for vintage cinema. Just off Harvard Square, the Brattle has been showing classic and independent films for something like six decades now, continuing the tradition long after so many others were wiped out by the VCR revolution in the 1980s.

But the Brattle soldiered on, and continues to do so today. Under the leadership of Ivy Moylan and Ned Hinkle, it continues to program all kinds of great film. (I checked and just tonight they screened 'Dr. Strangelove' (1964) and 'Duck Soup' (1933) -- how cool is that?) I was actually a member many years ago, when I had more of a chance to get down there, but I still attend screenings when I can. 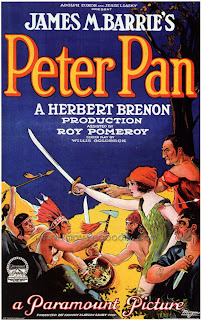 What's great about the Brattle is the commitment to screening film as it was intended to be seen: on the big screen, using actual film prints, and with an audience. And I'm pleased to report that this commitment extends to scheduling the occasional silent film, and using live music whenever possible, which is what we're doing with 'Peter Pan.'

Several Halloween-type silents with live music (from others) are coming at the end of this month -- for more info, see www.brattlefilm.org. For me, my big chance will be doing the music for Peter Pan. It's not actually my musical debut at the Brattle; in 2005, the theater screened 'Dangerous Crosswinds,' an independent feature film directed by Bill Millios for which I did the music.

But still, next week I'll be doing it live for the first time. I encourage you to check it out -- not only is the original 'Peter Pan' a real hoot, but it's a great film for music, too. Hope to see you there.

It's looking like a busy week. I also need to prepare for a screening of 'Nosferatu' (1922) on Thursday, Oct. 13 at the Flying Monkey Theater in Plymouth, N.H., and then 'The Cat and the Canary' (1927) on Saturday, Oct. 15 in Brandon, Vt. More on those later. For now, here's the 'Peter Pan' press release, with more info about the Brattle screening on Wednesday, Oct. 12... 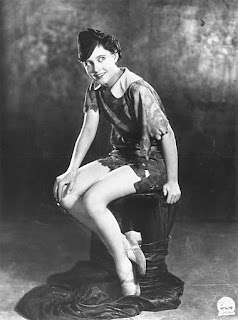 CAMBRIDGE, Mass.—It was the film that introduced movie-goers to visions of flying children, magical fairies, human-like animals and menacing pirates. It was the original silent film adaptation of 'Peter Pan,' a picture personally supervised by author J.M. Barrie. The film, starring actress Betty Bronson (at left) in the title role, became a major hit when released around Christmas of 1924, with audiences eager to get their first big-screen look at the wonders of Never Never Land.

Thought lost for many years, the original silent 'Peter Pan' maintains its freshness nearly 90 years after its release. Boston-area audiences can see for themselves when the first 'Peter Pan' (1924) is screened with live music on Wednesday, Oct. 12 at 8 p.m. at the Brattle Theatre, 40 Brattle St., Cambridge, Mass. Tickets are $9.75, with discounts for students, seniors, children, and Brattle members.

The screening of 'Peter Pan' will be accompanied by silent film musician Jeff Rapsis, who has prepared new material for the 115-minute picture. Rapsis improvises the score for each screening in real time, using a digital synthesizer to recreate the texture of a full orchestra.

"Live music is an integral part of the silent film experience," said Rapsis, who accompanies films at venues all across New England. "Music not only supported the action, but clued in the audience to changing moods and created an overall atmosphere. This new music for 'Peter Pan' is designed to help bring to life this film's special qualities of fantasy and child-like wonder."

The screening is part of the Brattle's "Peter and Alice" repertory series, which runs from Tuesday, Oct. 11 through Thursday, Oct. 13 and celebrates two iconic fantasy figures -- Peter Pan and Alice of the "Alice in Wonderland" stories. More information on the other screenings can be found at www.brattlefilm.org.

In 'Peter Pan,' first presented as a stage play in 1904 and then issued in book form, three London children are visited one night by a strange youth in search of his shadow. Peter Pan, accompanied by the meddlesome fairy Tinkerbell, teaches his new friends how to fly, and then convinces them to journey to Never Never Land. There they encounter Indians, mermaids, and a band of pirates whose leader, Captain Hook, is Pan's sworn enemy.

This sets the stage for an epic battle, the outcome of which will determine if the children may ever return home.

Though the Peter Pan story is well known today due to subsequent adaptations (and a brand of peanut butter), the tale was freshly invented when Hollywood first brought it to film in the early 1920s. In England, author Barrie agreed to allow the adaptation, though he retained right of refusal over casting and insisted that any written titles in the film be taken directly from his own text. After an extensive talent search, Barrie settled on unknown 18-year-old actress Betty Bronson for the title role, and filming began in 1924.

The film's highlights include special effects that maintain their ability to dazzle even today. The film's memorable images include a group of mermaids entering the sea and a pirate ship lifting out of the water and taking flight. 'Peter Pan' also includes a cast of animal characters played by humans in costume, including the family dog Nana and an alligator who serves as Hook's nemesis, lending the film a magical quality.

After the film's release, no copies of the original 'Peter Pan' were known to exist, and for many years the picture was regarded as lost. However, in the 1950s a single surviving print turned up in the George Eastman Archives in Rochester, N.Y., from which all copies today have descended.

"If you're not familiar with how accomplished silent film could be at its peak, then 'Peter Pan' will surprise you," Rapsis said. "The Brattle screening is worth checking out because it's a chance to see this great film as it was intended: in a theater, with an audience, on the big screen, and with live music."

'Peter Pan' (1924) will be shown on Wednesday, Oct. 12 at 8 p.m. at the Brattle Theater, 40 Brattle St., Cambridge, Mass. Admission is $9.75, with discounts for seniors, students, children, and Brattle members. For more information on the screening, visit www.brattlefilm.org, e-mail info@brattlefilm.org, or call (617) 876-6837. For more information on the music, visit www.jeffrapsis.com
Posted by Jeff Rapsis at 10:38 PM