You'd think two films could not be more different. I mean, one is an uplifting fantasy for children of all ages, while the other is about a guy who sucks blood from people and spreads the plague wherever he goes. 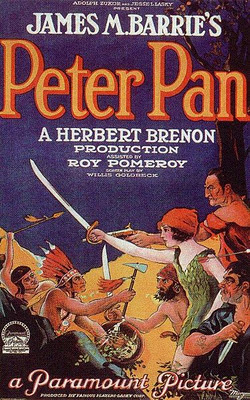 But 'Peter Pan' (1924) and 'Nosferatu' (1922) actually have a lot in common. I had the privilege of doing live music for them on consecutive days this week ('Pan' on Wednesday, Oct. 12 at the Brattle Theater in Cambridge, Mass., and then 'Nosferatu' on Thursday, Oct. 13 at the Flying Monkey Theater in Plymouth, N.H.), and I found myself surprised at the similarities. For starters, they're both fantasies -- even more so than most silent films -- and they both follow a similar story arc. They both start in a relatively contemporary setting with ordinary people, who are then transported to a distant locale where they encounter evil. In 'Peter Pan,' the Darling kids fly off to Never Never Land, thinking it'll be great, but then encounter Captain Hook. In 'Nosferatu,' Mr. Hutter rides off to Transylvania to close a property deal, and winds up encountering you-know-who. Both end with a return to the starting place, though with different results. 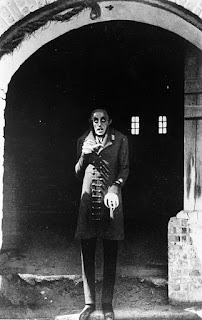 So in terms of music, I found myself building the score along the same lines. In both films, quite a bit of material in the opening sequences used material with a sharpened 4th in the scale, which creates four whole tones in a row and imbues any sort of melody with a kind of wonderous quality, I think. Both have hints of uncertainty right from the start: with 'Peter Pan,' it's the apprehension of Mother Darling about the mysterious boy who's been lurking outside the window, while in 'Nosferatu' there are a series of ominous incidents (the dead flowers) that hint at evil to come. So in both cases, I was able to sneak in some unsettling material to help bring that out -- in the case of 'Peter Pan,' it was just a slide up a half step, but that's all that's needed. Less is more.

However, each film required a kind of "anchor" melody to signify the status quo, and for it to be played cleaning through at least once. Why? Because more than an hour later, I think it really helps to have this melody return to augment the emotional release that comes with the story's denouement. But I'm getting ahead of myself.

Each film then features a journey to the strange local, which lends some motion to the narrative. In both films, I tried to bring this out in the score, keeping things energetic and having the music perform the age-old function of signifying a scene change. And once we're in the new locale, it was time to uncork the bigger musical moves to showcase the new surroundings and reactions of the characters (and the audience) to them. Things diverge a bit here, because Ernest Torrence as a not-so-menacing Captain Hook (who, among other things, is studying up on his etiquette) is not nearly as sinister as Max Schreck's coffin-dwelling vampire in need of dental work. But in both films, they served as the catalyst for the music to take a turn for the big, which I could do with maximum effect because I'd kept things small and light up until then.

'Peter Pan' then climaxes with a pirate battle, while 'Nosferatu' is a bit more measured, taking its time for the title character to make his way to Wisborg and set up shop. In either case, though, I looked at these respective sections as similar to the "development" section of a piece of music in sonata form -- the part where you take your themes and mix them up and work them out and chop them up and put them back together again, all to serve the on-screen action and emotion. At any given screening, there's no telling how this will go, but I'm pleased to report that in both cases it seems to fall together nicely.

And each film ends with a restoration of some sort, providing me my chance to bring out the big "anchor" theme (in 'Peter Pan,' it was about motherhood; in 'Nosferatu, it was love) for one big rising climax prior to the final cadence.

One note about audience reaction, which was distinctly different. The 'Peter Pan' crowd at the Brattle was quiet to the point of reverence, which I kind of expected, as the screening followed a book-signing by Harvard scholar Maria Tatar, who just published an annotated edition of J.M. Barrie's play. But they did perk up for the big "clap to save Tinkerbell" scene, which always gets everyone going. (I was pleased, by the way, when Tatar told me afterwards that she had no idea the silent 'Peter Pan' could be such a compelling film.) Up in Plymouth, we drew a lively crowd indeed, with full-throated screams breaking out during the spooky organ music prelude. There was also a lot of good-natured laughter by folks new to silent film, which sometimes happens when you show this flick or 'Phantom of the Opera.' No harm, but it was enough to cause one guy about halfway through to shout loudly (vulgarity alert!), "Will you shut the fuck up!?"

Reception was enthusiastic at both venues. We had about 40 folks for 'Peter Pan,' and maybe twice that for 'Nosferatu,' which was by far the largest house we've had yet up in Plymouth, where I've been doing monthly screenings for more than two years. Let's hope it's a breakthrough and attendance builds further from there!

Thanks to everyone at the Brattle and the Flying Monkey for their support of live music with silent film. I'm looking forward to the next screening, which is Saturday, Oct. 15 (tomorrow!) in Brandon, Vt., where the final film of the 2011 season is Paul Leni's thriller 'The Cat and the Canary' (1927).
Posted by Jeff Rapsis at 9:54 AM