The big snowstorm that hit our corner of the world this past weekend left the Wilton (N.H.) Town Hall Theatre without power, and so the planned screening of 'Faust' (1926) on Sunday, Oct. 30 has been postponed to Sunday, Nov. 6 at 4:30 p.m.

I wasn't able to update this blog until now (Monday morning) because it's the first Internet access I've had since the storm hit our area on Saturday. Yes, the storm itself had blown over by Sunday morning. But what it left behind was a landscape of downed trees and power lines, and no landline or cellphone service. Fortunately for us, our house in Bedford, N.H. had power restored fairly early; even now, large parts of our town are without power, and it could take several days to restore everyone, I'm told. 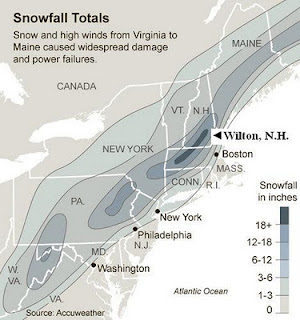 Having no way of knowing if the Wilton screening was still on, I loaded up the gear and off I went. I found the roads into Wilton barricaded due to downed trees, but managed to thread my way through back streets to the downtown area. There, theater manager Dennis Markavarich had posted handwritten "CLOSED NO POWER" signs on the doors, but I knocked and he was there anyway. The town (and the theater) had lost power on Saturday night, and no one knew when it might be restored. Later, I discovered (see the map) that Wilton was right in the heaviest bands of snow.

Well, I apologize to anyone else who may have made the trek out there to see 'Faust.' With no power, we had no show, and we had no way to make a decision about it beforehand and get out the word. However, it's still a film that's really worth seeing, and so I hope folks can make it out to our "replacement" showing on Sunday, Nov. 6 at 4:30 p.m. We're also screening Buster Keaton's comedy short 'The Haunted House,' (1922), in honor of Halloween but also because it contains, improbably, a big reference to 'Faust.'

Back in Wilton, phone service had also been lost completely, prompting the town to put temporary signs along roads telling people to drive to the fire department in case of emergency. But what was really unusual was the lines of cars at gas stations -- in some cases, dozens of vehicles snaking out of station parking lots and down roads, blocking traffic lanes and so on. It reminded me of the gas shortage lines of the 1970s. It was, of course, the combination of many stations closed with people needing fuel for gas-powered generators. Back where I live in Bedford, with 60 percent of the town is still without power, after dark the cold landscape throbbed with the asymetric hum of generators running all night.

What does this have to do with silent film? Other than some of the gas lines having the potential to deteriorate into scenes similar to Laurel & Hardy's comedy short 'Two Tars,' not much. But I at least wanted to try getting the word out about our changing plans.

By the way, we're still showing 'The Hunchback of Notre Dame' (1923) at the Manchester (N.H.) Public Library on Tuesday, Nov. 1 at 6 p.m. -- unless we get another two feet of snow between now and then. After Hurricane Irene in August and now this, anything's possible.

Update: It's now Monday evening (Oct. 31), and I've seen news reports this evening that describe Wilton as one of the hardest-hit communities in the state. There's even a small chance that the power may not be on by this next weekend, so keep your fingers crossed and we'll update things as they happen.
Posted by Jeff Rapsis at 9:27 AM