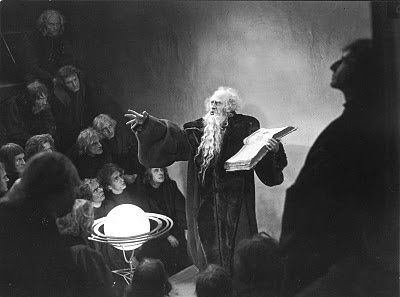 I don't know what's going on, but I'm going through a period where fully formed melodies are coming to me all at once. It's weird—I'll be doing something like driving or riding my bike, my mind occupied by other things, and suddenly I'll find myself with a rich, completely formed melody in my head.

This happened a week ago, when I started humming an expansive tune that will work well as a main theme for 'The Big Parade.' Where it came from, I have no idea. (For details on this melody, see the last post.) And it happened again this past Saturday, when I was out for a brief bike ride on one of the last relatively warm weekend afternoons I expect we'll have in our part of the world before Old Man Winter sits on us for the next six months.

Right after leaving the house, I found myself thinking in 3/4 time, exactly in rhythm with the pedals on the bike. And I found myself thinking of 'Pee Wee's Big Adventure' (1985), perhaps because of the picture of Frances Buxton that I'd used in the last post, and also because I'd just read something about how film composer Danny Elfman (who did the film's distinctive score) suffers from hearing loss, and maybe also because of the prominent role of a bike in that picture. 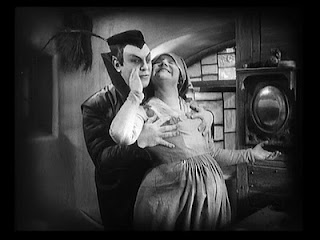 And as I pedalled out onto County Road, right into my head came a rollicking waltz accompaniment, which was then topped by a sardonic melody that seemed to be tailor-made for Emil Jannings as "Mephisto" in 'Faust' (1926). It was right there, a four-phrase melody that was ripe with expressive possibilities! I tried to "solfeg" it (the musical term for sounding out the notes) while I rode, thinking it was in E minor, but couldn't quite figure out the harmony of the middle portion of it. A minor? Something else? 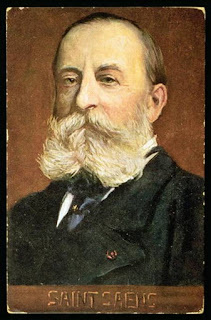 So upon returing, I went to the piano and found that the melody in my head was in B minor, which was cool because that's the key traditionally associated with the underworld. (So I was off by a major fourth—hey, I'm no Mozart.) And the harmony thing was basic but tricky: B minor, then to C major, then back to B minor. Unusual, but a move that the French composer Camille Saint-Saëns seemed to use quite often. Anyway, it has the flavor of a lot of his stuff, especially the "Danse Macabre," which might have been in my head along with all the bicycles and images from 'Pee Wee's Big Adventure.'

And also, a special thanks to film blogger and reviewer Jay Seaver for mentioning me and the music I did at a screening of 'Peter Pan' (1924) earlier this month at the Brattle Cinema in Cambridge, Mass. Thanks, Jay! Didn't realize you were in attendance. Hope to do more screenings in the Boston area as opportunities arise.
Posted by Jeff Rapsis at 1:42 PM