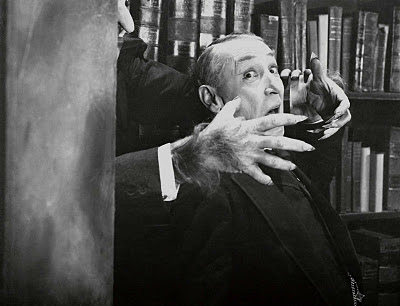 We finish up our 2011 season of silent film in Brandon (Vt.) Town Hall on Saturday, Oct. 15 with a 'Chiller Theatre' presentation of 'The Cat and the Canary' (1927), Paul Leni's wonderfully evocative haunted house thriller. It's being dubbed 'chiller theater' because the town hall is currently unheated, and it being October in New England, things can get downright frigid once the sun goes down. So we're taking the precaution of urging attendees to dress warmly, and hoping that once things get going, the magic of silent film will heat things up as well.

I have truly enjoyed presenting silent films in Brandon with live music during the past two years. People there have been enthusiastic, the screenings have raised money for the ongoing renovation of the town hall (which will someday have heat!), and I look forward to another season next year. Send in your requests and we'll see what we can do!

The screening of 'Cat and the Canary' is at 7 p.m. and is free to the public, though donations are accepted to help the renovation. And if it's not too cold, I have a short surprise to follow as a bonus. See you there. Here's the press release with more information... 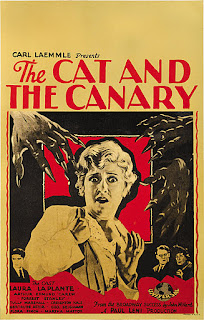 BRANDON, Vt.—'The Cat and the Canary' (1927), a haunted house thriller from Hollywood’s silent film era, will be screened with live music as part of 'Chiller Theatre' on Saturday, Oct. 15 at 7 p.m. at the Brandon Town Hall in Brandon, Vt. Admission is free; donations are encouraged, with proceeds to benefit the Town Hall's ongoing restoration.

The Halloween-themed screening is the final show for this season's silent film series at the Brandon Town Hall. Organizers have dubbed it "Chiller Theater" in part because the town hall remains unheated. Attendees are encouraged to dress warmly and bring a blanket to keep warm.

'The Cat and the Canary' stands as the original movie thriller -- the first picture to feature the reading of a will in a haunted mansion complete with clutching hands, a masked killer, disappearing bodies, and secret passageways.

The Brandon screening will use a fully restored print that shows the film as audiences would have originally experienced it. 'The Cat and the Canary' will be accompanied by live music by New Hampshire composer Jeff Rapsis, who specializes in silent film scoring. Rapsis will improvise the score on the spot during the screening.

Critics praise the original 'Cat and the Canary' for its wild visual design and cutting edge cinematography. Film reviewer Michael Phillips singled out the film for using "a fluidly moving camera and elaborate, expressionist sets and lighting to achieve some of the most memorable shots in silent film, from the amazing tracking shots down the curtain-lined main hallway to the dramatic zooms and pans that accompany the film's shocks."

'Cat and the Canary' will be shown on Saturday, Oct. 15 at 7 p.m. at Brandon Town Hall and Community Center, Route 7, in Brandon, Vt. Admission is free; donations are encouraged, with proceeds to support ongoing renovation of the town hall. For more information, visit www.brandontownhall.org. For more info on the music, visit www.jeffrapsis.com.
Posted by Jeff Rapsis at 12:19 PM