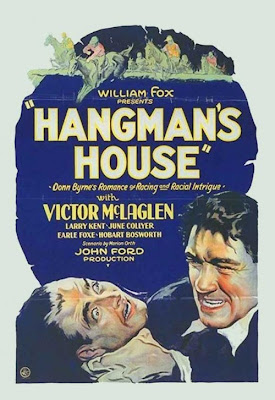 We drew a good-sized audience last night (Tuesday, March 6) for our showing of 'Hangman's House' (1928), a rarely screened Fox silent directed by John Ford that holds up really well. Although it includes a lot of horse action and the first notable cameo appearance by a very young John Wayne, the film isn't a Western, but is a drama set in Ireland. (Okay, maybe it's western Ireland.)

The music turned out well, I thought — I used a new "fanfare" theme for the main male character that worked wonderfully under a galloping rhythm during a key horseracing scene, and also a "fake Irish" tune that proved versatile in pumping up the drama. About 40 people stayed afterwards for a half-hour question/answer period, and many said they really liked the film.

But the experience was also notable for what happened off-screen. While setting up at the Manchester (N.H.) Public Library, a man I'd never seen before came up and began loudly telling us to make sure we had the closed captioning on. "For a silent film?" I asked, in the middle of cueing up a projector, but then realized what was going on.

Turns out, yes, he's completely deaf. Years of asking for the closed captioning to be turned on had made him a creature of habit, and he'd forgotten it was a silent film. We chatted a bit — although he can't hear anything (including the music, which might have been to his advantage), he can read lips and communciate quite easily with others. I was so pleased he attended and hope to see him again soon.

I can't say the same, exactly, for a group of kids who noisily came into the auditorium about a half-hour into the screening and proceeded to act like they were in their living room at home and watching the big-screen TV. Well, this is what happens at the library, where everyone is welcome, so you need to have a "big tent" philosophy as far as audiences go.

But these kids were running in and out of the auditorium and creating a distraction for me, and for the audience as well. It never got so bad that I had to stop playing and say knock it off, but it came darn close. Still, new audiences have to come from somewhere, and afterwards they returned and we chatted briefly about "old movies." (One of them wanted to know if the movies we show are older than 'Titanic,' from 1997!)

And after the screening, when opening the auditorium's rear entrance to start loading out my gear, I was startled when the door bumped into a homeless man sleeping on the stoop. (He was startled, too.) The guy was nice enough, considering the situation, and he vanished quickly into the night, leaving me alone to ponder the glamour of cinema in New Hampshire on my own.

Coupla thoughts from last night's "talk" period with the audience. I think it's important to remember that 'Hangman's House' is not regarded as an all-time silent film classic. It's more of a typical release — the kind of film that Hollywood was cranking out on a routine basis in the late silent era. And yet it still has an astonishing ability to hypnotize an audience. So it stands as yet another good example of why people fell hard for the movies.

Directors such as Ford, with little background in the stage, were coming up with films that hold up well today because they're more natively cinematic, I think. The acting is more realistic, at least to our eyes, and a lot of the basic tools of cinema (close-ups, moving cameras, location shots, imaginative visuals) are present. They really knew what they were after by 1928, and that proficiency helps the films work today, even on an audience not used to silent film. 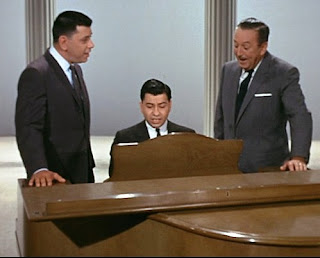 The other thing is to mention Robert B. Sherman, one of the songwriting Sherman brothers, who died yesterday in London at age 86. (The younger brother, Richard M. Sherman, is still with us. That's them with Walt Disney; Robert, generally the "word" guy, is standing.) Perhaps it's because I was marinated in their work as a child, but I regard the Sherman Brothers as the gold standard for simple, memorable melodies.

They had a knack for using very basic musical ideas to create tunes that sound like they've existed all along, but the Shermans somehow discovered them. (It reminds me of what I once heard about sculpture: it's already there in the stone. The sculptor just "finds" it.) And because their most popular work was for musicals such as Disney's 'Mary Poppins,' a lot of it has a theatricality that I find especially appealing. I recall as a child being tremendously excited by the tunes in the non-Disney film "Chitty Chitty Bang Bang," and just as thrilled (as a big kid) when it was adapted a few years ago for a stage version in London.

And they're one of the models I have in mind when I do my own music for a silent film. Ideally, I try to create simple but memorable tunes that, by virtue of their recognizability, help a film score hold together as it unfolds in real time. And, once it's established, switching it around (using bits of it as connective tissue, changing from major to minor or back again, reharmonizing it) adds a whole other dimension to the possibilities — but only if people can recognize it in the first place.

So it all starts with simple, recognizable melodies, and I can say from experience that this sort of simplicity is not easy to achieve. So my hat is off to the Sherman Brothers, songwriters of my misspent youth, for showing how much potential remains in those white and black keys, even if you're courageous enough to aim for simple tunes, and persistent enough to burnish them to a high gloss.

Rest in peace, Robert!
Posted by Jeff Rapsis at 7:40 AM