On the road to Cinefest in Syracuse, N.Y. 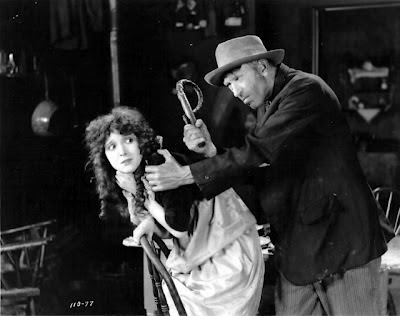 I'll be in Syracuse, N.Y. from Wednesday, March 14 through Sunday, March 18 as one of the musicians at this year's Cinefest. This is one of the big annual gatherings of vintage film buffs in the U.S., and I'm thrilled to be helping out. To any new friends, welcome to this running journal of adventures in silent film accompaniment!

Our first task comes Wednesday night, when the three accompanists gather with organizer Joe Yranski and decide who gets to do which film over the next four days. (Above: a scene from 'Hail the Woman' (1921), a melodrama on this year's program.)

Accompanists this year include veteran Phil Carli, whose work I find just phenomenal and who inspired me to start doing this, and Andrew Simpson, a very accomplished musician and composer from the Washington, D.C. area with a lot of silent film work to his credit.

Frankly, I'm amazed to be on the same program with talent of this caliber. I can only assume I was invited to serve as a "control factor" in some kind of experiment

I'll learn about only later. "Hey, here's a study where they deliberately put a mediocre musician in among pros to see how listeners would respond." Or maybe they've worked out a promotional deal with a local grocer for low-priced vegetables, and want to ensure there's something to throw them at.

Seriously, I'm grateful to Joe Yranski, Ben Model, and other folks who've made this appearance possible. A public thanks to all!

Cinefest focuses on rare silents or early talkies that aren't generally available. In fact, many of the titles weren't announced until just last week, and the schedule is always subject to change. As for silents, this year's four-day program includes 12 features and a bevy of shorts, too, and yes, I've never seen any of them!

(If you're interested, here's the schedule; the festival is online at www.syracusecinefest.com.)

So in terms of music, that means creating a score on the fly, which is always an interesting challenge. Sometimes things fall together surprisingly well; other times, not so much. As they say when you go car-shopping, mileage my vary.

How do we decide who gets to tackle which film? From what Joe outlined, we simply take turns claiming titles until they're all spoken for. I wonder if it'll devolve into a silent film version of "Let's Make a Deal?" I'll give you a couple of Mack Sennett two-reelers in exchange for the Tom Mix feature... As a native New Hampshirite, I find myself drawn to 'Hail the Woman' (1921), which, according to Joe Yranski's notes, features "a bigoted New England farmer," a character type I feel qualified to conjure through music. But we'll see.

I'll report on things as I'm able. If you're at Cinefest, please say hello!

Update from Cinefest: Well, I'm here and it's Wednesday night. We've divided up the films and the features I'm playing are:

Hey! That's only three. Somehow fellow accompanist Andrew Simpson wound up with five features instead of the four apiece. So I'll have to see what he'd like to do about this tomorrow...
Posted by Jeff Rapsis at 7:23 AM