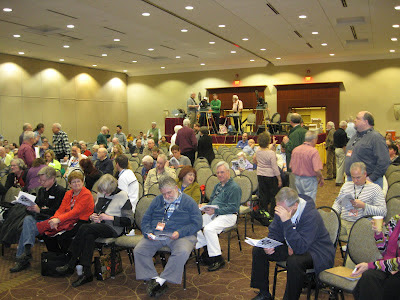 Okay, the first full day of this year's Cinefest is done, so here's a brief write-up of the highlights as I experienced them. (Actually, it's not quite over yet -- they're still running an Adolphe Menjou film downstairs, but it's over for me.)

• What a thrill to hear my two fellow accompanists come up with music for obscure films they've never seen before. Phil Carli (who is suffering a cold) played for Hepworth's English melodrama 'Helen of Four Gates' (1921), while Andrew Simpson tackled two features: 'The Forbidden Trail' (1923), a lively Western, and 'Street of Forgotten Men' (1926), a dark Paramount drama. Andrew also "tackled" music for a few silent parts of a football short, the first film out of the can at 9 a.m.

I can learn so much by taking in their respective approaches. The big lesson is to keep something in reserve. No matter how exciting the opening scenes may be, keep it light so you have somewhere to go as the film progresses. Both Andrew and Phil do this very well, and it's something I still need to work at.

• I opened this morning with 'Bell Boy 13' (1923), a bouncy comedy starring Douglas MacLean. The music came out in bright primary colors, mostly around a simple tune that kept finding its way into everything, seemingly. It took awhile for me to settle in, but I'm feeling pretty good and eager to get to tomorrow's films. I have two: in the afternoon, a feminist drama called 'Partners Three' (1918), and then at 10 p.m. 'The Dark Mirror' (1920) a surrealist drama about a woman's dreams. 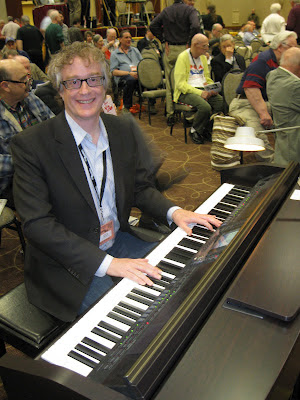 • I've been talking a lot with Andrew (here he is, above), and he's a really nice guy. His last name is Simpson and his hometown in Indiana is Shelbyville, so we immediately started singing bits from the 'Monorail' episode of The Simpsons, and then other musical parodies.

• This evening I got a chance to chat with movie critic Leonard Maltin, a long-time Cinefest attendee and supporter. I wanted to tell him that his book "The Great Movie Comedy Teams" was the first movie book I ever owned, and that I still have my paperback edition. Mr. Maltin was very gracious and eager to chat about all things film. 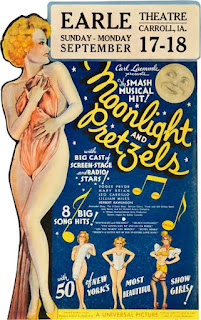 • Watched some but not all of the other programming. The highlight for me was 'Moonlight and Pretzels' (1933), a bizarre Depression-era musical from Universal that was screened this evening. Any film with William Frawley and a finale that includes stock footage of cattle and sheep (don't ask) gets my attention. And just to give you an idea about what the Cinfest crowd is like, the director credit for Karl Freund drew spontaneous applause!

• In non-film news, I squeezed in a three-mile run this afternoon (it's in the 60s here), preparation for the long run I want to do, probably on Saturday at this point. Also, I got up early and snuck off on my own for breakfast at the Miss Syracuse Diner. It's a bigger city than I thought -- something like 150,000 people in Syracuse itself, and 600,000 in the whole area. It's also where most of the salt came from in this country until about 1900.

The things you learn while on the road!
Posted by Jeff Rapsis at 12:04 AM