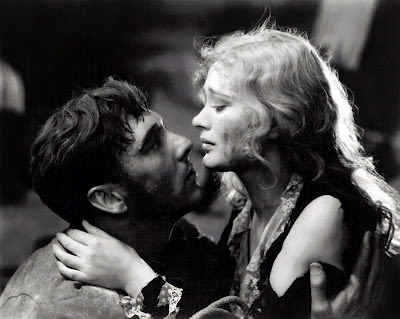 Tomorrow brings a new adventure: For the first time, I'm attempting to do live music for a part-talkie. The film is 'Noah's Ark' (1928), a silent picture that was released with two dialogue sequences during the silent/sound switchover period. With Easter on its way, it's our entry this year in the "Hollywood Biblical Epic" sweepstakes.

So how are we going to coordinate the dialogue scenes with the silent sequences that require live music? At first I thought we could do it by me signaling the projection booth to turn the sound up or down, perhaps by coughing. (Three short coughs to turn it up, two long throat-clears to turn it down.) 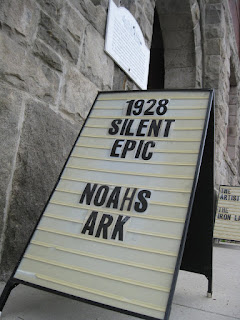 But Dennis Markevarich, owner of the Wilton (N.H.) Town Hall Theatre, came up with a better solution. He's wired the sound through a switch that's been placed down below the screen, where I usually set up my keyboard. When the sound needs to come up, I just flip the switch! Simple -- in fact, so simple that I'm worried that something has to go wrong. We'll see. (Or hear, at least.)

As for the film, it's a doozy! It has everything from massive spectacle taken from scripture to Louis Fazenda playing the guitar. Looking forward to seeing it on the big screen, and I hope you'll join me at the Wilton Town Hall Theatre on Sunday, March 25 at 4:30 p.m.

I'm hoping it rains, if only to get everyone in the right mood.

- Also, this afternoon (Saturday, March 24) I did a film program at the Courville, an assisted living center in Nashua, N.H. Interesting because every time I played a big passage, silverware in the nearby dining room would audibly rattle! Nice audience of about 20 folks, and the activities director on duty happened to be the daughter of my godfather. What a small world it is!
Posted by Jeff Rapsis at 9:00 PM