'The Flying Fleet' leaps surprisingly off the runway 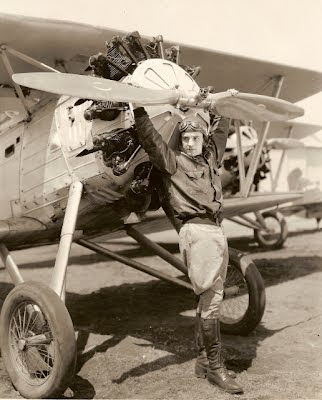 Ramon Novarro puts some glamour back into aviation in 'The Flying Fleet.'

It happened again! A silent film that I had my doubts about leaped to life when shown in a theater with an audience.

In this case, it was 'The Flying Fleet' (1929) the late MGM silent about U.S. Navy aviators starring Ramon Novarro, Ralph Graves, and Anita Page. (Can you imagine a movie star today with a name like 'Ralph Graves?') The plot: six Annapolis graduates all hope to be pilots. Who will make it? Who won't? And how will Anita Page get in the way?

Our monthly silent film screenings in Wilton, N.H. are on the last Sunday of each month, which means they usually fall on Memorial Day weekend. So I try to use the occasion to pay tribute to our country's military. So when picking titles last fall, 'The Flying Fleet' seemed a good bet: not the usual fare, but something worth reviving.

But when I finally looked at it this month to get ideas for music, I was less than impressed. What a dud! Undeveloped characters, little drama, even less romance, a few forced "comedy" scenes, and primitive aviation sequences, at least compared to 'Wings.' Uck!

Then, with final exams where I teach, there wasn't time to send out the usual press materials. And finally, as Memorial Day weekend drew closer, it was clear we'd be blessed with spectacular weather in our part of the world, which is usually murder for an afternoon silent film screening.

So imagine my surprise on Sunday, May 27 when a fairly good crowd turned up on a brilliant sunny day to take in this relic. And to my further surprise, the film really did work!

In terms of music, things went well right from the start: a rousing chorus of 'Anchors Aweigh,' a tune that threaded its way into a lot of what followed. (I avoided other tunes, such as the 'Wild Blue Yonder' tune, because they draw too much attention from the movie and also people notice if I hit a wrong note.)

An early scene in the doctor's office when the cadets get checked out built nicely using bouncy accompaniment and chords with augmented fourths, which always seem to indicate busy-ness and things happening. But 'The Flying Fleet' really soared (pun intended) when the aviation scenes started.

Not sure why I didn't sense this when previewing the film, but these scenes are full of motion and tremendously exciting, and I love doing music for them. I was especially happy with how the music developed in the first sequence, when the trainee pilots get their first ride in a plane. It just grew organically, getting more energetic and intense as the action progressed, and then got dissonant when one of the hopefuls developed a major case of air sickness.

And the real value of improv came out near the end, when (SPOILER ALERT), following a crash at sea, an injured character decides he's too much of a burden on his fellow aviators and slips into the sea while they sleep. The music, in a minor key and with 'Anchors Aweigh' as the bass line, just grew and grew with the sequence, but I pulled back right before the character slides into the water, which really emphasized the drama of the moment. And then I could come in again strongly when the other characters awoke and realized what had happened. Tremendously exciting cinema, if I do say so myself.

The ending of 'The Flying Fleet' was still completely unsatisfying: we hear that the heros get medals of honor, but don't see anything, and Anita Page shows up on a hospital vessel, prompting one of our audience members to ask loudly: "How did she get on the ship?!" (A good question.) And yes, some of the scenes still included Czech, untranslated from the source print, lending a surreal aspect to the film. (Was the U.S. Navy using Czech for coded transmissions in the 1920s?)

But the film's impact was undeniable. The whole saga of the six fellows, and who would make it as a pilot and who wouldn't, and then what would happen, really stuck to the screen and really held the audience. So score another one for silent film when shown in its native habitat: on the big screen, with live music, and with an audience!

'Some Things Never Change' Department: In introducing 'The Flying Fleet,' I played up the idea that the film was interesting today in part because it showed how things were done in the U.S. Navy in times past. I think my exact line was "It shows the U.S. Navy 80 years ago, but it might as well be 800 years ago."

Well, blow me down if a U.S. Navy vet didn't come up afterwards and say that it's all still pretty much exactly the same, including the Hotel Coronado in San Diego. The only thing that's changed, he said, was the Pensacola training base, which was apparently wiped off the map by a hurricane at some point. Other that that, it's still the same, although the aircraft have been updated.

I stand corrected. And so now 'The Flying Fleet' is of interest to modern audiences because it shows us how some things haven't changed.
Posted by Jeff Rapsis at 9:21 AM