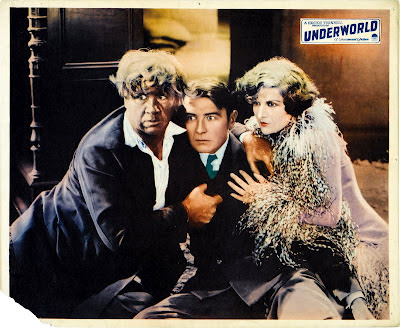 'Underworld,' (1927), a picture I've never done before, is the feature for a screening on Tuesday, June 5 at 6 p.m. at the Manchester (N.H.) Public Library. An early film from director Josef von Sternberg, it has an abundance of great black & white photography, with an emphasis on shadows.

But for music, I'm not sure. I think the temptation will be to do a lot of 1920s-style jazz, but somehow that doesn't seem right to me. I keep thinking the model might be the music that Marvin Hamlisch wrote for Woody Allen's 'Take the Money and Run' (1968) might be a better model. We'll see.

I think another big challenge will be getting the audience to take seriously George Bancroft's haircut. As gangster Bull Weed, Bancroft cuts a pretty mean figure, but for much of the film his hair looks ridiculous. The photo at left provides a good idea of what you're in for.

MANCHESTER, N.H.—'Underworld' (1927), a silent drama that spurred a boom in 'gangster' movies, will be screened with live music on Tuesday, June 5 at 6 p.m. at the Manchester (N.H.) Public Library, 405 Pine St., Manchester, N.H. The film will be accompanied live by silent film musician Jeff Rapsis. Admission is free; donations are encouraged. 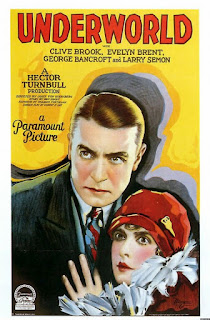 'Underworld,' directed by Josef von Sternberg and starring George Bancroft, is notable for being the first major motion picture to portray a gangster in a sympathetic light instead of a villain. Its popularity touched off a boom in Hollywood gangster pictures that reached its peak following the stock market crash of 1929.

Bancroft's performance in 'Underworld' set the stage for memorable characterizations of gangster protagonists by Jimmy Cagney ('Public Enemy,' 1931), Paul Muni ('Scarface,' 1932), and Edward G. Robinson ('Little Caesar,' 1930), which all follow directly on from the model created by 'Underworld.'

The film's script, by Chicago newspaperman Ben Hecht, earned an Oscar for Best Screenwriting at the first-ever Academy Awards. The film is also noted for director von Sternberg's innovative use of black-and-white photography, which presaged many film noir techniques in following decades.

Director Von Sternberg was obsessed by light, and developed methods of “painting” his compositions with the arrangements of lamps, scrims, and reflectors on the set. Today he is remembered most for having used that skill in a series of films he made with Marlene Dietrich, starting with 'The Blue Angel' (1930) and continuing in six more star vehicles made in Hollywood, including 'Morocco' (1930) and 'Shanghai Express' (1932).

'Underworld' is the latest in a monthly series of silent films presented with live music in the Manchester Public Library's vintage 1913 Carpenter Auditorium. A wide range of rarely seen silent films are shown at the library, with screenings generally taking place on Tuesdays at 6 p.m.

Upcoming silent film screenings at the Manchester Public Library include:

• Tuesday, June 26, 2012, 6 p.m.: 'Spite Marriage' (1929); Buster Keaton's last silent feature finds the poker-faced comic smitten so much by stage actress Trilby Drew (Dorothy Sebastian) that he joins the cast of her production. The fun really starts when she asks Buster to marry her, but only to get even with an old flame. Classic Keaton comedy, underrated and full of great routines. Admission free, donations encouraged.

• Tuesday, Aug. 7, 2012, 6 p.m.: 'Four Sons' (1928); director John Ford's drama about four brothers from Bavaria who become embroiled in World War I — but not on the same side! Interesting period drama set in Europe, carried by great story but with plenty of historical interest as well. Admission free, donations encouraged.

• Tuesday, Aug. 28, 2012, 6 p.m.: 'Chicago' (1927); the original big screen adaptation of the notorious Jazz Age tabloid scandal, based on true events. Dancer Roxie Hart is accused of murder! Is she innocent or headed for the slammer? Later made into the popular Broadway musical. Admission free, donations encouraged.

'Underworld' will be shown on Tuesday, June 5 at 6 p.m. at the Manchester (N.H.) Public Library, 405 Pine St., Manchester, N.H. Admission is free, with donations encouraged to defray expenses. For more information, visit www.jeffrapsis.com.