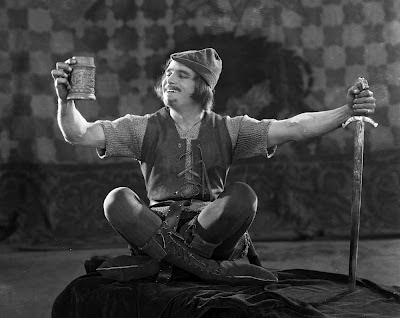 Our summer celebration of Douglas Fairbanks Sr. kicks off this weekend with 'Robin Hood' (1922), the swashbuckling star's big screen adaptation of the famous legend from Merrie Olde England. It's showing with live music at the Wilton (N.H.) Town Hall Theatre on Sunday, June 24 at 4:30 p.m., with free admission. (But buy some popcorn and support the theater. It's good popcorn. Really.)

I've done 'Robin Hood' once before, but I'm developing all-new music for this screening. It's a challenging film for modern audiences, I think, because Fairbanks framed it a story of aristocrats, and so it takes forever to get to the actual "Robin Hood" part.

Today, we'd expect a film titled 'Robin Hood' to get right to the action in Sherwood Forest, with the green-suited bandit robbing from the rich and giving to the poor. The Fairbanks 'Robin Hood' isn't set up that way, so we'll see how patient our audience is on Sunday afternoon. 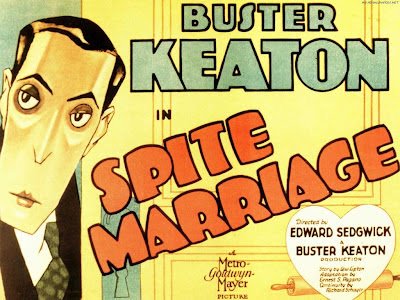 Keaton's 'Spite Marriage' (1929) is a film I've never done before, but I'm eager to see how it fares with live music at our screening, set for the Manchester (N.H.) Public Library on Tuesday, June 26 at 6 p.m.

Growing up, books such as Rudi Blesh's 'The Films of Buster Keaton' made 'Spite Marriage' seem like a really minor film—Keaton's sad last gasp, with little of the originality and excitement of his great 1920s silent features.

But the truth is, Keaton remained a popular star throughout the early talkie era, and 'Spite Marriage' wasn't badly received by audiences at the time. It has some pretty inventive sequences, I think.

However, 'Spite Marriage' was released with a recorded musical score—one that's interesting from an historical perspective, but which now sounds pretty dated, at least to my ears.

So for 'Spite Marriage,' I'll try to do my usual thing of supporting an older film with updated music that sounds something like what today's audiences would expect when they see a film in a movie theater.

This one is also free, so hope to see you there as we bring Buster's last silent feature back to life.