Riding the wave of accompanying
a three-day silent film marathon The 2012 Olympics may be about to start in London, but here in New Hampshire my own personal endurance event is about to commence. I'm talking about the multi-day all-day festival of silent short comedies that seems to happen around here every every year about this time.

In recent years, it's taken the name "Mirthquake," but this time around it's part of the biannual convention of the Sons of the Desert (the international Laurel & Hardy appreciation society), which is taking place this weekend in Manchester, N.H., of all places. 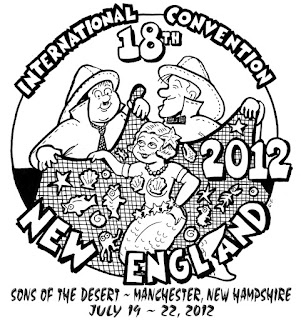 So, as part of the convention activities, we're doing three full days of silent comedies, most with some connection to Stan and/or Ollie, starting tomorrow morning (Thursday, July 19) and running through Saturday afternoon. About 300 people have registered from all over the U.S. and several European countries, so that bodes well for at least some kind of audience.

The venue is the Manchester (N.H.) Public Library, 405 Pine St. It's one of the convention events that's free and open to the public, so come on in. All told, it's about 15 hours of film with live music, all of it provided by me. It's a lot to look at, and the offerings include a dozen 35mm prints on loan from the Library of Congress.

And though it seems insane, I look at this as a kind of challenge rooted in my own style of accompaniment. When a film program starts, it usually takes me a little while to settle in and "lose myself" in creating live music. I find the more I do, the "better" I get, or at least the easier things come to me. It seems to build on itself. So this marathon offers an unprecedented chance to ride that wave in a big way.

And I have to say, by the time I'm done with this sort of a bout, there's a natural facility to it all that isn't there when I start. (Maybe it's just the result of complete mental exhaustion!) And that's a key thing because on Saturday afternoon, directly after we finish in Manchester, I'll be high-tailing it up to Brandon, Vt. to do yet more music for a silent film screening that evening, and I'm eager to see how it all comes together. (And also which hospital I'll wind up in if it doesn't.)

So the endurance test of the next three days, I view it as sort of the "ultra racing" of silent film accompaniment. It's good to push yourself once in awhile, and 16 hours of music for century-old films that I've never seen before is one way of doing that. 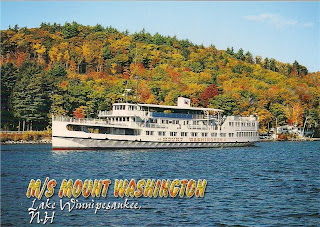 And to add variety to the whole project, tomorrow night I'm joining the Sons on the M.S. Mount Washington for a Lake Winnipesaukee cruise, on which I'll accompany singers performing such L & H standards as "Honolulu Baby" and other novelty songs, including "Lydia the Tattooed Lady," for which I only just today got the sheet music.

The whole event will be climaxed, I predict, by a rendition of "Let Me Call You Sweetheart," with me accompanying the singer "oompah-pah" style on the bass tuba in the manner of Stan Laurel accompanying Oliver Hardy's serenade of the same song in "Swiss Miss" (1938).

All I can say is that I hope that Lake Winnipesaukee is not populated by a fresh water species of whale. If it is, once I start playing the tuba, they will all no doubt rise en masse tomorrow night and swamp the boat.

Check the 11 o'clock news to see what happens.