A revolutionary film: D.W. Griffith's
'Orphans of the Storm' on Bastille Day 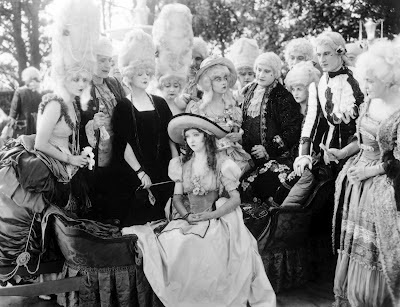 Lillian Gish mingles with the aristocracy in 'Orphans of the Storm' (1921), a silent film epic set during the French Revolution.

As seen above: The hairstyles alone are worth the price of admission!

I'm speaking of 'Orphans of the Storm' (1921), the French Revolution epic that was pioneering director D.W. Griffith's last big popular hit. In honor of Bastille Day, we're putting it up on the big screen on Saturday, July 14 at 7 p.m. at Red River Theatres in Concord, N.H.

Admission is $10 per person, which is less than the price of a haircut. And I don't mean the kind given by a guillotine.

I got behind on updating things here during my recent mid-summer break, but this screening should be a good one so I wanted to get at least some info posted. So here's the text of a press release that went out earlier this week.

Hope to see you at Red River on Saturday! 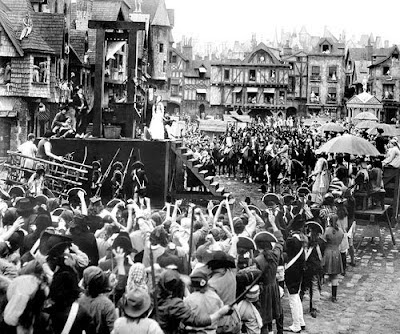 CONCORD, N.H.—Heat up your Bastille Day this year with the fires of revolution! 'Orphans of the Storm' (1921), a sweeping silent film drama set during the uproar of the French Revolution, will be shown with live music on Saturday, July 14 at 7 p.m. at Red River Theatres, 11 South Main St., Concord. Admission is $10 per person.

'Orphans of the Storm,' set in 1780s France, follows the story of two orphaned sisters, one blind, who seek to cure her vision by risking a trip from their country village to Paris. There, they are soon separated by events beyond their control as anarchy erupts, the aristocracy is toppled, the French royal family is executed, and the city is engulfed by the unpredictable chaos of revolution. Will fate reunite the two sisters before the guillotine separates them forever?

'Orphans of the Storm,' directed by legendary silent film pioneer D.W. Griffith, features dramatic mob scenes of revolutionary Paris filmed on a massive scale. Also, the story builds towards a spectacular and fast-moving race-to-the-rescue climax that wowed audiences in 1921, making 'Orphans of the Storm' one of the year's biggest hits.

"We're thrilled to continue to present silent film with live music at Red River," said Shelly Hudson, the theater's executive director. "It's a great example of how we're fulfilling our mission to bring cinematic experiences to our audiences that can't be found elsewhere, and which aren't possible to create in the home."

In showing silent film, Red River aims to recreate the conditions in which they were intended to be shown: restored archival prints shown on the big screen, with live music and an audience.

Leading roles in 'Orphans of the Storm' are played by two actual sisters, Lillian and Dorothy Gish, both major stars of Hollywood's silent era. Lillian Gish went on to a career that lasted long enough to include an appearance on 'The Love Boat' television series in the 1980s. She died in 1993 at age 99. Younger sister Dorothy Gish also enjoyed a productive career that included stage, film, and television roles into the 1960s; she died in 1968 at age 70.

'Orphans of the Storm' was the last in a string of successful blockbusters helmed by Griffith, who pioneered large-scale historical epics with films such as 'Birth of a Nation' (1915), 'Intolerance' (1916), and 'Way Down East' (1920). Though he continued making films, Griffith was superseded the 1920s by a new generation of filmmakers willing to take his innovations even further, creating the foundation of the motion picture industry we know today.

Although 'Orphans of the Storm' was released nine decades ago, critics today say Griffith's French Revolution epic holds up well for modern viewers. Leonard Maltin praised the film's "lavish settings and race-to-the-rescue climax," judging it "still dazzling." Critic Jeremy Heilman of www.moviemartyr.com wrote "the sheer amount of realized ambition on display in it makes it a sight to behold."

About D.W. Griffith, film historian Kevin Brownlow summarized his genius by writing, "however skillful the other early directors might have been, none of them knew how to project anything but the most basic emotions until Griffith showed them. And it was emotion, rather than close-ups and fade-outs, that made the people of the world fall in love with the moving picture."

The July 14 screening of 'Orphans of the Storm' will be accompanied by a score created and performed live by silent film musician Jeff Rapsis. Rapsis achieves a traditional "movie score" sound for silent film screenings by using a digital synthesizer that reproduces the texture of the full orchestra. Rapsis, a New Hampshire-based musician, was recently named among the state's top musical performers in New Hampshire Magazine's recent "Best Of" edition.