What I said about 'The Gold Rush,'
plus notes on three days of silent film comedy 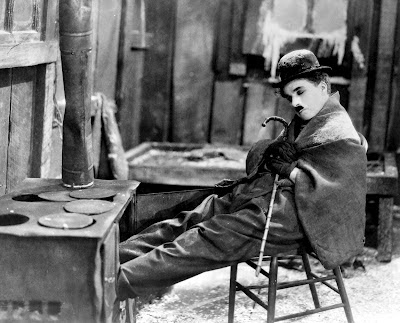 • Last night (Saturday, July 21), I was gratified to received an enthusiastic and prolonged ovation after doing music for Chaplin's go-for-it-all film, 'The Gold Rush,' which we screened at the Brandon Town Hall in Brandon, Vt. as the latest installment in our monthly silent film series there.

But what I'm thinking about today is what I said to the audience (about 100 people) before the film started. In most cases, I'm usually obliged to say a few words about a picture prior to the start, and so off I go, doing my best Robert Osborne imitation.

The problem, however, is that sometimes I've fumbled the spoken intro pretty badly. Maybe it has something to do with my brain already going into "Silent Film Music Improv Land," which tends to degrade my verbal facility. (Really! Try holding a conversation with me after a long, absorbing film.)

With practice, I've gotten better at introducing movies, but it's still not something I naturally do well. So I've been trying to work on it. And the guiding prinicple that's emerged is "Less Is More." People are there to see a silent film, not for someone to go on and on. So keep it short.

Here's another rule: "Context Is King." Names such as Harry Langdon might not need an introduction to hard-core cinema buffs, but most of the people in my audiences are not film scholars. So in the limited time I have, it's important to provide some context. What do they need to know to get the most out of what they're about to see?

Sometimes it involves reminding an audience what Prohibition was and how it worked. Sometimes it involves explaining why someone was popular. In the case of Langdon, it's usually enough to point out that he became popular in part because he was so different from most other silent film comedians. His star rose in response to other clowns, as what he did seemed fresh and original at the time. Hard for an audience to get that on its own. So I say something.

How about this rule? "Don't Give Away the Plot." Okay, it's common sense not to spoil anyone's surprise. But there's a very important corollary to that rule: "Don't Provide Distracting Details." Don't point out trivia, no matter now amazing it might be, if it could distract an audience from coming under a film's spell.

So, for the film 'Noah's Ark' (1928), I avoided pointing out how legend has it that several extras drowned during the flood scenes, because once you mention that, it's all an audience can think of. Same thing with Harold Lloyd's two missing fingers — if you're showing 'Safety Last' (1923), don't say anything about it before the film because it's all that people will look for.

Finally, I try to say something that bridges the gap between the time when the films were made and today. For 'The Gold Rush,' I pointed out how Chaplin was able to balance comedy and pathos in a way where each seems to enhance the other, and that the whole film was a neat metaphor for what we all do in life. "Aren't we all prospecting for gold in one way or another? And aren't we sometimes surprised when we discover something else — something we weren't even looking for?"

And that's it. There's an art to knowing when to shut up, and I'm slowly getting better at it. Need to remember: they may be silent films, but they can still speak for themselves.

• Also, this past weekend saw the biannual convention of 'The Sons of the Desert,' the international Laurel & Hardy appreciation society, in my home base of Manchester, N.H. The confab's packed schedule included three days of silent film comedy shorts in 16mm and 35mm at the "William K. Everson Theatre," which our downtown library's auditorium was redubbed for the occasion.

And because live music is such an important element of silent film, I volunteered as accompanist for what turned out to be 14hours of film over three sessions. I say the music was "live" but by the time it was over, the accompanist was half-dead.

Well, not really. But it is an awful lot of film to improvise music to. And what I like about it is that after awhile, I get into this supercharged state where the music starts flow almost automatically, with very little conscious effort on my part.

I especially felt this way on Thursday and Friday afternoon, nearing the end of five hours of accompaniment with a lunch break in the middle. I found myself finding melodies that came from nowhere and were sometimes quite catchy and versatile — often enough to build a lively score right on the spot.

On the other end of the scale, I can't vouch for the quality of the accompaniment when it comes out in a continous stream like that. In fact, I can barely remember any of the films! It's like what happens when I don't have a lot of time for the Sunday paper but try to skim through it anyway. Five minutes after I'm done, I can't remember anything. And so it went with hours and hours of short comedies, one after another.

A few films stood out, however. Many of the Larry Semon two-reelers were fun to watch as well as accompany, and because they always end in a frantic and spectacular chase, you can count on building up a lot of momentum before the finish. I think my favorite film of all was the sole feature of the program: 'No Man's Law,' a 1927 Western drama from Hal Roach Studios starring Oliver Hardy, Jimmy Finlayson, and Rex the Wonder Horse. Something clicked immediately with this one, and it never let up — five reels of real music, rather than just bouncy accompaniment to comic antics. And the crowd loved it! Thanks to film archivest Bruce Lawton, one of the projectionists, for bringing his 16mm print of this rare curiosity. 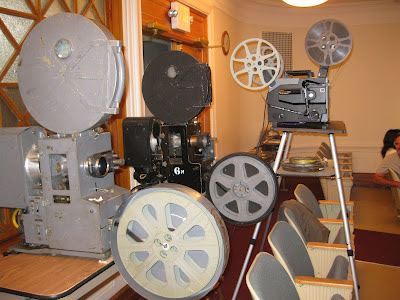 The other projectionist, Eric Grayson, came all the way from Indianapolis with his pair of "portable" 35mm projectors. Yes, they were indeed portable, but in the same way that the Cape Hatteras Lighthouse could also be moved. They're heavy pieces of industrial equipment, with greasy parts that are the enemy of any dress shirt, as I found out. 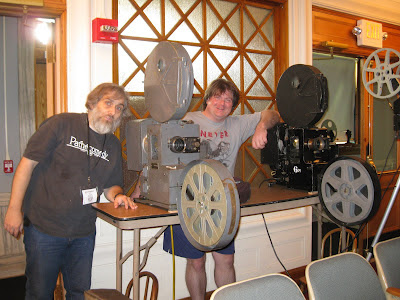 And here's a rare photo of our projectionists, who do their best work in the dark. Seriously, Eric Grayson (left) and Bruce Lawton are the best in the business and we were fortunate to have them on hand!

In looking over all the pieces, I felt like Eric planned to assemble not a pair of 35mm projectors, but some kind of small piece of World War II field artillery. I wasn't even sure they ran on electricity, jokingly asking Eric who would shovel the coal needed to keep them running.

• Another highlight of the 'Sons of the Desert' convention was supplying live music to a screening of Laurel & Hardy's silent comedy 'That's My Wife' (1929) as part of a vaudeville/variety show staged on Friday, July 20 at the Palace Theatre in downtown Manchester, N.H.

The show was headlined by comedian Emo Philips, whom I had sort of forgotten about since his 1980s peak. But Emo is still performing, and I had no idea he does such great stuff. It's kind of a mix of Bill Maher and Steven Wright. A lot of it mocks organized religion, and it's so refreshing to hear a comedian do intelligent and provoking stuff.

And some of it is just plain funny. A paraphrase: "I used to live in New York City. Whenever I get nostalgic for it, I just fill my humidifier with urine."

So it was a thrill to come up on stage after doing the music, shake Emo's hand, and share a moment with him. Who says silent film accompanists don't rub elbows with the best and the brightest?