This weekend: Douglas Fairbanks
takes flight in 'The Thief of Bagdad' 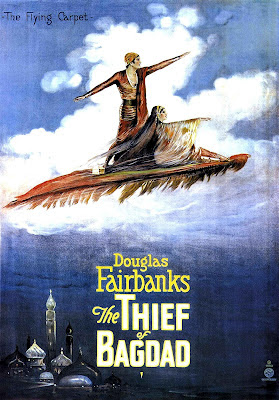 Our summer tribute to Douglas Fairbanks Sr. continues this coming Sunday, July 29, with a screening of 'The Thief of Bagdad' (1924), the picture that Fairbanks himself felt was his favorite.

Looking at this movie nearly nine decades later, it's not hard to see why. Fairbanks, secure in his "swashbuckling adventure hero" mode, was firing on all cylinders in a film that fills the screen with one memorable sequence after another.

And I agree with Doug. I've seen and accompanied pretty much all of the big Fairbanks features from his 1920s peak, and this is the one where he put it all together. And the only way to experience its full effect is to see it as it was intended — in a theater, with live music, and with an audience!

That's just what we'll do on Sunday, July 29 at 4:30 p.m. at the Wilton Town Hall Theatre in lovely downtown Wilton, N.H. And I hope you'll join us in bringing this terrific film back to life. Here's the press release with all the details... 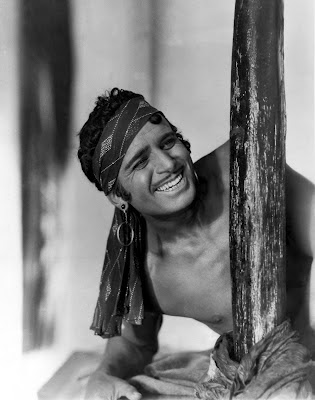 WILTON, N.H. — He was the Harrison Ford of his time—an action hero who first entertained movie audiences with thrilling adventures and feats of derring-do.

He was silent screen idol Douglas Fairbanks Sr., whose best work includes 'The Thief of Bagdad' (1924), a timeless fantasy that features a great story, spectacular sets, and magical special effects.

'The Thief of Bagdad' will be screened on Sunday, July 29 at 4:30 p.m. at the Wilton Town Hall Theatre, 40 Main St., Wilton, N.H. Live music will be provided by silent film accompanist Jeff Rapsis. Admission is free, with donations accepted to help defray expenses.

In 'The Thief of Bagdad,' a bare-chested Fairbanks plays a crafty rogue who can easily steal anything his heart desires—everything, that is, except the love of a beautiful princess, daughter of the powerful Caliph of Bagdad. To win her hand, he must not only change his ways, but also convince her of his worthiness over many other highly placed suitors.

In making the film, Fairbanks spared no expense for what some critics still regard as the most lavish fantasy movie ever made, a show-stopping adaptation of the traditional "A Thousand and One Nights" story in which rides on a flying carpet are but one of many eye-popping sights that astounded movies audiences at the time. 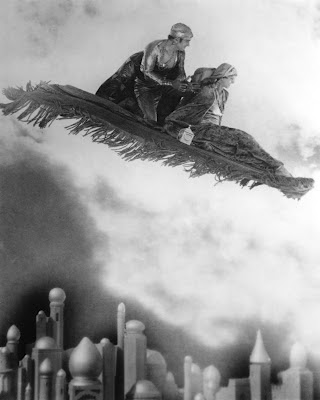 The jaunty opening is a preamble to the film's spectacular second half. To win the hand of the princess, three powerful kings scour the globe to retrieve the rarest treasures known to man. Meanwhile, the repentant thief embarks on his own odyssey through caverns of fire, underwater caves, and even outer space. The special effects range from a smoke-belching dragon to a magical flying horse, and still glow with a timeless sense of wonder from the early days of movies.

William Cameron Menzies's sets were among the largest ever created for a motion picture. Especially noteworthy is his design for a mythical Bagdad, a unique combination of Art Deco and Islamic elements—a dream city formed from a coalescence of illustrations from story books.

'The Thief of Bagdad' is the next feature in the Wilton Town Hall Theatre's ongoing summer-long Fairbanks salute.

Fairbanks, one of the most popular stars of the 1920s, was the inspiration for the character of George Valentin in the recent Oscar-winning Best Picture 'The Artist' (2011). Fairbanks was known for films that used the then-new medium of motion pictures to transport audiences to historical time periods for great stories, grand adventures, and athletic stunts. He's often referred to as "Douglas Fairbanks Sr." to avoid confusion with his son, the actor Douglas Fairbanks Jr.

Live music for 'The Thief of Bagdad' will be provided by silent film accompanist Jeff Rapsis, who uses a digital synthesize to recreate the sound and texture of the full orchestra.

"This is one of the great silent films for music," said Rapsis, who improvises accompaniment using themes or melodies he composes beforehand. "The exotic settings and all the special effects provide a lot of places where music can really add to the atmosphere, and gives you a chance to do some unusual stuff," he said.

Nearly 90 nears after its premiere, critics continue to hold 'The Thief of Bagdad' in high regard. In 1996, the film was selected for preservation in the U.S. National Film Registry by the Library of Congress as being "culturally, historically, or aesthetically significant." Fairbanks himself considered 'The Thief of Bagdad' to be his personal favorite of all of his films.

Consistent with his moralistic concepts, Fairbanks meant the picture to convey a message of inspiration and hope. "Our hero," he wrote, "must be every young man of this age and any age who believes that happiness is a quantity that can be stolen, who is selfish, at odds with the world and rebellious toward conventions on which comfortable human relations are based." This, Fairbanks believed, was a deception that must be exposed. 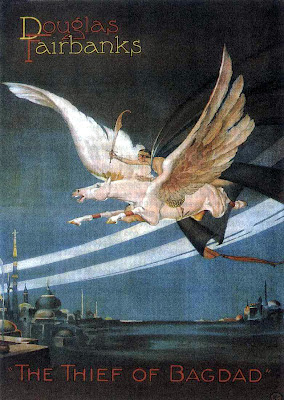 'The Thief of Bagdad' is appropriate for family audiences, though some sequences may be frightening for very small children. The film runs 2 hours and 34 minutes.

The ongoing Fairbanks salute is part of the Wilton Town Hall Theatre's monthly silent film series, which gives today's audiences a chance to experience the great films of Hollywood's early years as they were intended: in restored prints, on the big screen, and with live music and an audience.

"If you've never seen a silent film in a theater with live music and an audience, the Fairbanks pictures are a great way to experience the medium at its best," Rapsis said. "When you put all the elements together, silent film still has an ability to stir up an audience in a way that no other medium can."

More information on upcoming titles in the Fairbanks series:

• Sunday, Aug. 26 at 4:30 p.m. brings 'The Iron Mask' (1929), an adventure set in 18th century France and the last film that Fairbanks released before talking pictures swept silence aside. Directed by Allan Dwan, 'The Iron Mask' was released as a part-talkie, with Fairbanks featured in several spoken interludes where he addresses the audience directly. The version to be screened at the Wilton Town Hall Theatre will include these original talking sequences.

In 'The Iron Mask,' Fairbanks reprises his role as d'Artangan from his earlier version of 'The Three Musketeers' (1921), only now as an older swordsmanship instructor to King Louis XIV of France. The long-secret existence of a twin brother of the king, separated at birth, leads to a plot to kidnap the now-grown king and usurp the monarchy, causing the true king to be imprisoned in an iron mask so that he can't be recognized. Fairbanks, as the king's protector and patriot of France, is left to save the day—but only if he can reunite the long-disbanded Three Musketeers.

The Fairbanks Summer Series continues with 'The Thief of Bagdad' (1924) on Sunday, July 29 at 4:30 p.m. at the Wilton Town Hall Theatre, 40 Main St., Wilton, N.H. Admission is free, with donations accepted to defray expenses. For more information, visit www.wiltontownhalltheatre.com or call (603) 654-3456.