Well, the fact that I'm bringing up the question should make it obvious: the Fairbanks film produced only a mild reaction at the Wilton (N.H.) Town Hall Theatre, while the Keaton film produced gales of laughter and applause at the Manchester (N.H.) Public Library. What's the deal? 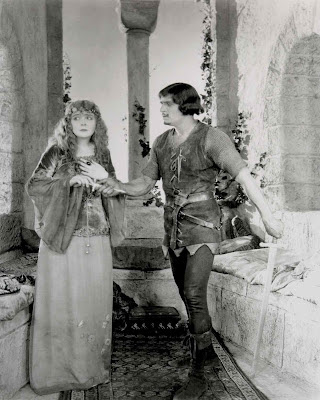 Well, for starters, I think the music was a factor. I specialize in improvised live scores, and sometimes things just don't click. You never know. With 'Robin Hood,' I had prepared several big themes to use to build the score on, but it never seemed to come together effectively. 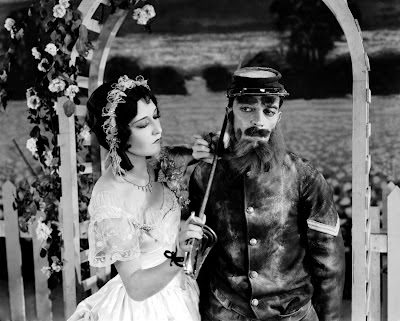 For 'Spite Marriage,' I didn't have time to create original material beforehand, but came up with a few simple themes on the spot and it all fell together wonderfully! I've noticed that's the case with me: when I overprepare, I seem to set myself up for failure, but when I play something cold, good things seem to happen more often.

Plus, with 'Robin Hood,' I made the mistake of starting too strong, which leaves you with nowhere to go, especially for a film that's nearly two-and-a-half hours long. The Keaton score, however, built organically from a goofy little diatonic tune that I riffed on and developed as the film unspooled.

But other factors played a part, too. For one thing, the Fairbanks picture takes a lot of time just showing us the Middle Ages in all its glory, which was big news to movie-goers of the 1920s but not so much to us in the we've-seen-it-all age. For a film about a well known legend such as Robin Hood, we expect it to start right in with the robbing-from-the-rich, and Fairbanks takes about 90 minutes before introducing even the idea of Robin Hood.

Buster's film, however, is a contemporary comedy, and as such just gets right to things, with a non-legendary story unhampered by audience expectations. He just makes us laugh, and then even the flimsiest plot (which 'Spite Marriage' has) doesn't seem to matter that much as long as the laughs keep coming, which they did at our screening.

Another strike against 'Robin Hood' is more basic: the way the Merry Men prance about the wilderness, alas, seems unintentionally comic to today's sensibilities. It kinda takes away from the magic spell that a good silent film can weave. But Keaton's dead-pan approach has worn pretty well over the years -- perhaps it's okay to call it timeless? One style gets in the way of the spell, while another enhances it.

I must say I knew what we were getting into with 'Robin Hood.' I've run it before, and it's not the most rousing of the Fairbanks swashbucklers, despite the gigantic castle sets. But I'd never had a chance to run 'Spite Marriage,' nor had I ever seen it with an audience, so I was curious to see what kind of reaction that "lesser" Keaton would get.

I was pleasantly surprised! Scene after scene was greeted with delighted laughter, so much so that I really backed off the accompaniment to let the reaction cross-pollinate and build and grow as naturally as it could. Once again, a picture that seems mildly amusing when watched alone became an absolute riot when shown with an audience. 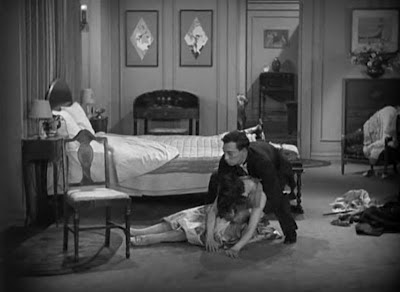 The highlight for me was the sequence in which Keaton tried to get a passed-out Dorothy Sebastian into bed. It's always been called a classic, and Keaton used the routine quite a bit later in life, but I've never thought it was that terrific.

But audience last Tuesday night rewarded it with constant, astonished laughter, including a spontaneous round of applause when Keaton places a chair under Sebastian and gets her into a sitting position. It was one of those great moments when, sitting there at the keyboard in the darkness, I felt a powerful sense of joy at what we were all doing.

And one final thought about music. 'Spite Marriage' was released with a recorded soundtrack, and I imagine purists would insist that this be used in any screenings. But to me the recorded track sounds antique and a little hyperactive, actually, and serves to place the film in a "yesterday" box.

But by doing fresh music and doing it live, I like to think we helped bridge the gap between yesterday and today for our audience, making 'Spite Marriage' less of a museum piece and more immediate and compelling and easier to lose oneself in.

Thanks to all for a great first half of 2012. And to top it all off, I just found out that I was recently included in New Hampshire Magazine's annual "Best of N.H." survey, for which I'm profoundly grateful.

I'm really looking forward to the second part of the year, which includes more performances of the Moving Panorama in Saco, Maine; a program with Kevin Brownlow at the University of Arkansas, and screenings galore in New Hampshire, Vermont, Maine, and elsewhere. See you at the movies!