At the Buster Keaton Celebration
in Iola, Kansas: Meeting the Family 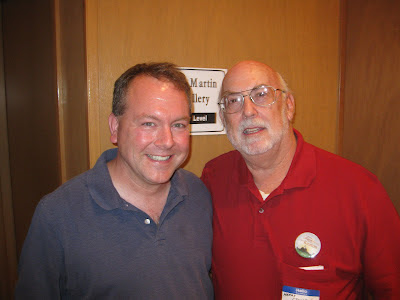 For me, the highlight of this year's Buster Keaton Celebration was hearing stories from Buster's daughter-in-law, granddaughter, and nephew. All three were guests of honor at the celebration (the 20th annual), held on Friday, Sept. 28 and Saturday, Sept. 29, 2012 at the Bowlus Arts Center in Iola, Kansas.

Why Iola? Because in 1895, Keaton was born just a few miles to the west in Piqua (pronounced "pick way"), a village that was tiny then and even tinier now. And thus Iola, the nearest burg of any size (population 5,700), became the logical place to honor Keaton with a now-annual get-together of scholars, film buffs, and the just plain curious.

And why go there from New England? (One attendee described it affectionately as "two and a half hours from any damned airport.") Well, because the Keatons aren't coming to New Hampshire anytime soon. And also the chance to hear from film preservation icons Kevin Brownlow and David Shepard, who also attended, plus to hear the Mont Alto Motion Picture Orchestra do live scores to 'Our Hospitality' (1923) and 'The General' (1926).

The vivid memories of the Keaton family came as a true surprise. Sitting onstage together on Saturday afternoon, they recalled incidents that went into significant detail that I'd never heard before. A lot of it was the kind of stuff that every family winds up talking about, but in this case, it's Buster's family.

I'd met Melissa Talmadge Cox, Buster's granddaughter, once before. It was at the 2010 Kansas Silent Film Festival, at which my wife and I got to take her to lunch at Bradley's Corner Cafe in North Topeka, the colorful "bad" part of town. We had a nice chat, but it wasn't the time and place to probe family history in detail.

Well, this weekend's Keaton Celebration brought not only Melissa, but also her mother Barbara Talmadge and Harry Keaton Jr., the son of Buster's brother Harry "Jingles" Keaton. And when they all sat down on stage to reminisce, the stories started coming.

Melissa opened things with a family photo album to provide some context, capped with a wonderful shot of her as a young girl with a stone-faced "Grandpa Buster" in a child's inflatable swimming pool. Great stuff! It nicely augmented what I recalled from her 2010 presentation and helped introduce the other family members.

Then Barbara and Harry began swapping stories, and what I heard was fascinating. Both are a bit older than Melissa (Barbara is a spry 87), and both had a seemingly endless treasure trove of first-hand tales involving Buster going back as far as the 1940s.

Barbara recounted in astounding detail the time her husband (Jim Talmadge, Buster's first son) brought her to meet his dad. Buster had long been estranged from his two boys following his divorce from their mother, Natalie Talmadge. And so not only had he not met his son's wife (Barbara), but he didn't know he'd become a grandfather. To me, that lack of communication spoke volumes (ironically) and helped fill in a key piece of Buster's life at the time.

Another tale: Buster's sister Louise, who never married, had wished to be buried with her mother, Myra Keaton, who had died in 1955. When Louise died in 1981, confusion first ensued when her body went missing for several days, having wound up at a Los Angeles mortuary that had no information about her identity.

When that was cleared up, the family interpreted her wish by first cremating her, then going out to Myra Keaton's cemetery plot and auguring a narrow hole all the way down to the casket, apparently. The family then used a funnel to get the ashes down to their final destination. "True story," Harry Keaton averred, as everyone in the place broke up.

I managed to speak a bit with Harry, now retired after a long career with the phone company in California. These days, he enjoys the role of family representative at the various Keaton tributes, and has a lot of interesting recollections. After all, he was part of the household when the Keatons were all living together in the 1940s, and he saw it all first-hand.

And Barbara Talmadge, now participating in Keaton events after being reticent for most of her life (presumably out of respect for her husband, who died in 2007), seems to be a particularly rich resource of first-hand recollections and accounts of Buster from World War II onward.

I didn't get a chance to talk with her but someone should, at length, and write it all down. I find it amazing that in 2012, we can still get fresh first-hand accounts of a significant time in Buster's life.

It was also interesting to get Kevin Brownlow's perspective on issues ranging from Raymond Rohauer (one glance of his during a panel said it all) and the difficultly of presenting vintage film in a way that does justice to it. Quoth Kevin: "Showing a film as if it's viewed out of the bottom of a champagne bottle is a cultural crime of the first order." (At least that's what I recall him saying.) Hear, hear, Mr. Brownlow.

Other highlights of the festival, in addition to seeing film friends, were learning that the town of Peculiar, Missouri has one of only two three-legged water towers in the entire Show-Me state; that the Wal-Mart Super Center in Iola is actually the second smallest such establishment in the entire United States; and that my wife is a dead-ringer for the mother of a friend of a server at Iola's B & B Country Cafe.

Yes, traveling is broadening! Especially so after sampling the B & B Country Cafe's fried chicken platter.