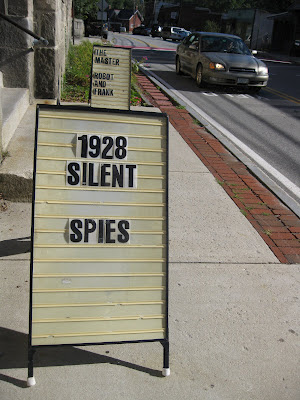 It was no secret that we screened Fritz Lang's espionage thriller 'Spies' (1928) this afternoon, as you can see by the signs outside the Wilton (N.H.) Town Hall Theatre, and even on nearby Route 101: 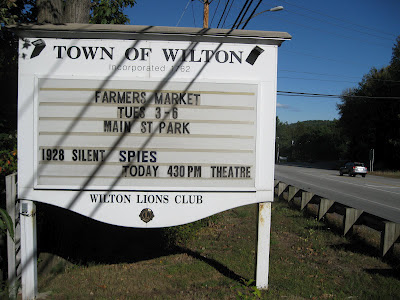 Alas, the weather was wonderful, as you can also see in the pictures—the first full day of autumn boasted sparkling sun, blue sky, a light breeze, and dry air.

So you might conclude that attendance was low, and you would be right.

I think we had maybe 40 folks show up, a much lower turnout than usual. Not sure if it really was the weather, or because 'Spies' just isn't a draw, or something else. I think the film is a terrific piece of work, and a fun film for music, and it did get a good reaction from those who were on hand. But I would still like to see it in a truly crowded theater, so it remains on my list to do elsewhere and see what happens.

Speaking of what happens, I was pleased to see Dennis Markavarich, long-time owner/operator of the Wilton Town Hall Theatre, go on the record this past week with his plans to keep the theater open even as Hollywood converts its first-run output to digital media. You can read the full story in the Milford Cabinet, a local paper.

The Town Hall Theatre, which Dennis has run since 1972, is my favorite movie theater anywhere, and that's not because Dennis lets us run a monthly silent film program there. For first-run movies, Dennis takes pride in running shows in which the focus and the bulb brightness and all the details of presentation are always taken care of. He even has a red curtain that he opens and closes, in a nod to a practice that was once standard. The popcorn is great and not overpriced. His seats are big and comfy, with some rescued from old movie palaces that are no more. Also, movies have been shown there since 1912, so the place has a kind of vibe that you somehow don't get in your local multiplex.

In one nod to changing times, the theater does have a Facebook page. On it, someone described the Wilton Town Hall Theatre as the "red castle of celluloid dreams," and I can't think of a more magical way of putting it. It really does look like a castle, too. Here's a snapshot of the exterior I took prior to our screening of 'Spies,' with the building lit up by the late afternoon sun: 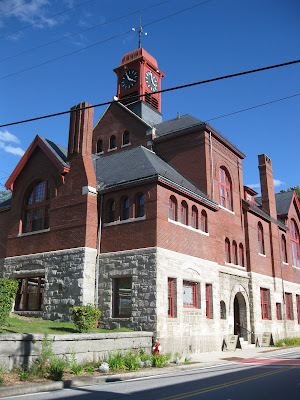 We're entering our fourth year of screening silents at Wilton, and I do hope we can continue to go on indefinitely. I think of it as my "home base," and nowhere else do I feel quite as comfortable as the Town Hall Theatre.

Dennis, of course, goes to a lot of trouble to make the place comfortable. New Hampshire summers can get pretty hot and sticky, and the building was erected in 1886, long before central air. So Dennis gets by the warmer months with a battery of wall units augmented by a collection of fans that get deployed throughout the warmer months.

So you know summer is truly over when Dennis hauls out all the fans and preps them for cold storage. Hence this shot of me after 'Spies' surrounded by, yes, some of fans: 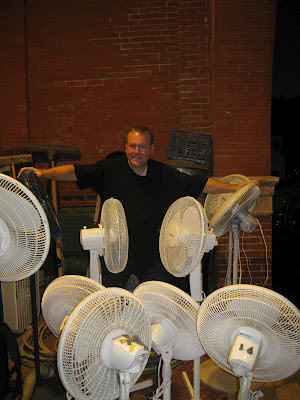 We do get regulars, but each screening also brings a few new faces. Because 'Spies' was preceded by a 2 p.m. screening of the new film 'The Master,' we had to wait around the lobby for it to end before I could go in and set up my stuff. While standing there chatting with the usual suspects, I noticed some new folks, but didn't get a chance to speak to them.

To my delight, one of the newbies came up afterwards and introduced herself as a woman from England who was visiting our corner of the world and staying in Hancock. We chatted for a few moments, but I was my usual completely brain-dead self just after doing a film score (and a long one at that), so I can't recall anything else. So: Hey, English gal roistering in Hancock! If you're out there, please get in touch with me at jeffrapsis@gmail.com

I was also delighted when a woman came up afterwards with her two sons, who were aged maybe 9 and 11. I had seen them coming in and wondered what they'd make of this film, which is unusual fare even for die-hard silent film fans. Turns out it was their first-ever silent film, and they loved it! And that alone made the whole effort worth it, with the English gal with the charming accent a wonderful bonus.

Coming up next is another biggie—a screening of 'The Thief of Bagdad' (1924) on Wednesday, Sept. 26 at Red River Theatres in Concord, N.H. as part of the theater's fifth anniversary. More on that in a separate post. But it's one of my favorite silents and I do hope we fill the 55-seat screening room.
Posted by Jeff Rapsis at 12:34 PM