Catching up on a few random thoughts...

• On Wednesday, Sept. 26, I did music for a screening of 'The Thief of Bagdad' (1924), the great Douglas Fairbanks fantasy epic, at Red River Theatres in Concord, N.H. The audience was small, but included a family from actual present-day Bagdad, who seemed to enjoy the picture.

I wasn't sure how they got to New Hampshire, but they were at Red River at the invitation of Rick Broussard, my former colleague at New Hampshire Magazine, who was also on hand for the screening. (Rick seems to know everyone, even the recent arrivals from Bagdad.)

It's a big film and I was particularly wasted at the end of it, so I have only a fuzzy recollection of the family's reaction afterwards. One of them who spoke little English (and so was translated by someone else) communicated that when he was young, his grandmother would play music for silent films, and so when I played, he heard his grandmother. I took it as high praise!

• The gradual disappearance of the 35mm format (actual film!) for first-run movies is causing some changes at some of the venues where I do silent films. The Town Hall Theatre in Wilton, N.H., where movies have been shown since 1912, is passing on conversion for now but will continue running first-run pictures in 35mm as long as possible, in hopes that the cost of conversion will come down substantially in the future.

The Leavitt Theatre in Ogunquit, Maine, where they've been running movies since 1923, is another case. Converting a one-screen summer-only house to digital doesn't make financial sense at all, and so they're not sure what next season will bring. If 35mm prints aren't available or are hard to come by, that might be that.

If the Leavitt fails to reopen, it would be a darned shame. It's remarkably unaltered from the time it opened (the wooden seats still have wire rims underneath for gentlemen to stow their hats), and a great place to see film, with its steeply raked wooden floor. 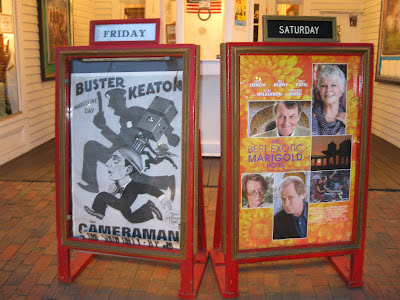 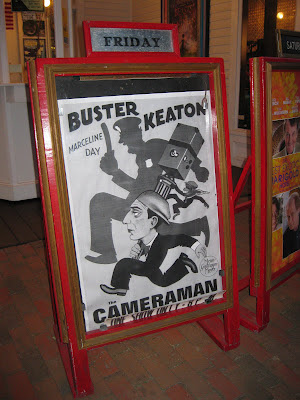 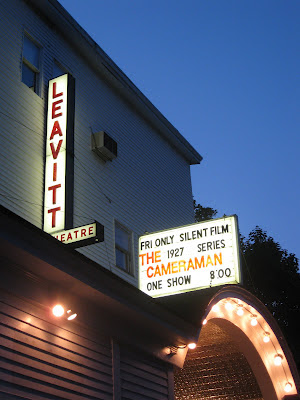 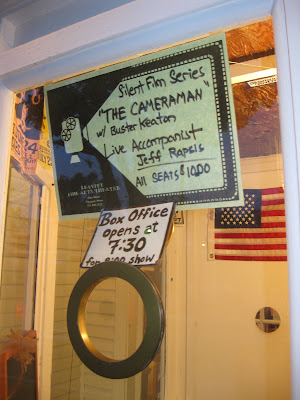 Can you believe it? Full-sized sidewalk posters for a Buster Keaton feature in 2012? Nearly 100 people turned out, and the audience greeted Buster's antics with one big reaction after another. It was one of the highlights of the season! (I also like being described as a "live accompanist," as opposed to the other kind.)

• There's a big piece by David Denby, film critic for The New Yorker, with this headline: "Has Hollywood Murdered the Movies?" It's pretty wide-ranging (and, yes, long) but worth a read. I was particularly interested in his ideas about how the overreliance of digital animation in today's movies (as opposed to photographing reality) has been a contributing factor in their decline.

Too much to get into here, but I did want to make the point that it's obvious to me that in screening silent films today, the reality of the photographed image (this actually happened) is one of their most compelling aspects. The further you get away from that, the less you have of a "movie" and the more you have of something else.

So silent film, with its relatively basic techniques, may still have something to teach us. These pictures, after all, are what caused people to first fall in love with the movies. Beyond being the subject of pleasant tributes such as 'The Artist,' perhaps films of this era offer some clues about what works and what doesn't. And so that's another reason they're worth looking at.

Anyway, here's the piece. I must say that I found his characterization of people who write about certain specific niches of cinema (like silent film) a little dispiriting: "They are extraordinary, some of them, and their blogs and websites generate an exfoliating mass of knowledge and opinion, a thickening density of inquiries and claims, outraged and dulcet tweets. Yet it is unlikely that they can do much to build a theatrical audience for the movies they love."

Well, I know the thousands upon thousands of people who religiously study this blog would disagree. And, thankfully, it continues to be a useful way at doing exactly what Denby doubts can be done: Get people into a theater for the shared experience of silent film with live music.