I'm thrilled to be doing music this weekend for 'Spies' (1928), a film that I didn't know at all until the Kansas Silent Film Festival this past February. The movie, presented there in its shortened version, was Fritz Lang's follow-up to 'Metropolis' (1927), and after seeing it I just had to do it. And so we will—the long version, all 2½ hours of it—at the Wilton (N.H.) Town Hall Theatre on Sunday, Sept. 23 at 4:30 p.m.

It's amazing to me that 'Spies' pretty much invented the espionage genre all in one go. It's all there: the beautiful but dangerous woman, the high-tech gadgets, the evil criminal, the government agent who is a master of disguise. 'Spies' contains the DNA of every spy thriller for decades to come, and is a template for many of James Bond's adventures. Pretty impressive.

But I find the same thing is true with 'Woman in the Moon' (1929), Lang's voyage-to-the-moon drama and his last silent film. This picture contains the DNA of every trashy sci-fi epic—the ethnic scientist, the female scientist and her two handsome rivals, the little boy who stows away on the space craft. So score another genre for Lang.

More info on 'Spies' is in the press release, the text of which I'm pasting in below...

WILTON, N.H. — It was the movie that pioneered the espionage genre, complete with secret documents, hi-tech gadgets, an evil mastermind, and a beautiful but dangerous woman. It was 'Spies' (1928), an action-packed silent thiller, and will be shown with live music for one screening only on Sunday, Sept. 23 at 4:30 p.m. at the Wilton Town Hall Theatre, 40 Main Street, Wilton N.H.

'Spies,' made by German director Fritz Lang at the end of the silent era, served as a blueprint for decades of espionage story-telling to come in movies and, later, on television. It is especially notable for the many ways it anticipated the James Bond films, in which a government's secret agent must match wits with a criminal mastermind. 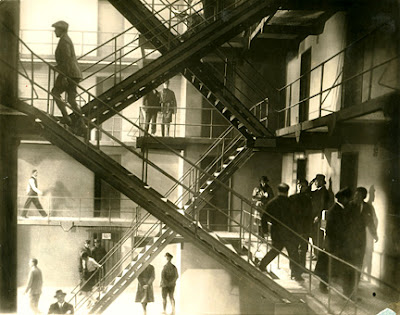 An international spy ring, headed by Haghi (Rudolf Klein-Rogge), uses technology, threats, and murder to obtain government secrets. As master spy and president of a bank, Haghi leads several lives using instruments of modern technology to spearhead a mad rush for secrets — secrets that assert his power over others.

Battling Haghi is the government's Agent 326 (Willy Fritsch), himself a master of disguise. Can Agent 326 stop Haghi's plot before it disrupts the world's balance of power?

Putting on the screen for the first time many elements of the modern spy thriller, Spione remains remarkably fresh and captivating over 80 years since its first release. Lang carefully reveals the elaborate methods of the spies as they move through his unknown city, no doubt creating a mirror of troubled Weimar Germany, where the film was shot.

Made by Lang's own production company and, like the classic films 'M' (1931) and Metropolis (1927), written by Lang with his wife Thea von Harbou, 'Spies' is "the granddaddy of decades of intrigue epics. In its rigorous austerity it remains the most modern of the bunch," wrote Elliott Stein of The Village Voice.

'Spies' features many of the same performers featured in 'Metropolis,' Lang's famous futuristic fantasy, including Klein-Rogge, who portrayed the scientist 'Rotwang' in the earlier movie. 'Spies' also stars Austrian actress Gerda Maurus as the mysterious woman who could prove to be the undoing of Agent 326.

Live music for 'Spies' will be provided by silent film accompanist Jeff Rapsis, who uses a digital synthesizer to recreate the sound and texture of the full orchestra.

"'Spies' is a wonderful film for music," said Rapsis, who improvises accompaniment using themes or melodies he composes beforehand. "In addition to telling great stories, Lang's films are also visually interesting, and so they lend themselves to music to heighten the drama and tension," Rapsis said.

'Spies' is appropriate for family audiences, although it includes intense scenes that may frighten very small children. The film is two-and-a-half hours long.

The screening of 'Spies' is part of the Wilton Town Hall Theatre's monthly silent film series, which gives today's audiences a chance to experience the great films of Hollywood's early years as they were intended: in restored prints, in a theater on the big screen, and with live music and an audience.

Upcoming silent films at the Wilton Town Hall Theatre include:

• Sunday, Oct. 28, 2012, 4:30 p.m.: "The Hands of Orlac" (1924). A concert pianist, Paul Orlac (Conrad Veidt), loses his hands in a railway accident. Replacement hands are transplanted onto him in an experimental procedure, but the hands are those of a recently-executed murderer. The pianist is then tortured by panic attacks and irrational fears. Admission free, donations encouraged.

• Sunday, Nov. 25, 2012, 4:30 p.m.: Silent film comedy. Cap off Thanksgiving Day weekend with a program of sure-fire hits from comedy's golden era! Belly-laugh at the antics of Chaplin, Keaton, Laurel & Hardy, and a few masters you may never have heard of. What better way to work off those holiday pounds? Admission free, donations encouraged.

The Wilton Town Hall Theatre runs silent film programs with live music the last Sunday of every month. For more information about the music, visit www.jeffrapsis.com.