Buster Keaton comes to the rescue
of the Ioka Theater in Exeter, N.H. 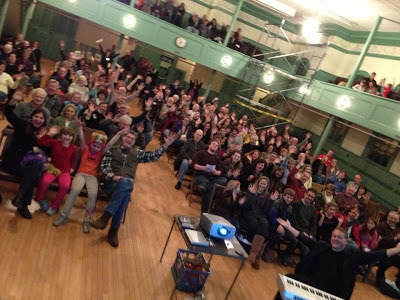 What the crowd looked like from the stage. Photo by Trevor Bartlett

The place was packed and the energy palpable! That's what it was like last night (Saturday, March 9) for a Buster Keaton double feature at Exeter (N.H.) Town Hall, an event staged to rally support for reopening a nearby one-screen movie theater.

The program? 'Sherlock Jr.' (1924) and 'The Cameraman' (1928), two films about film. It was a nice way, I thought, to raise awareness about Exeter's Ioka Theater, which opened way back in 1915 (with 'Birth of Nation,' no less), and enjoyed a long run as the community's downtown movie theater until closing in 2008.

Reopening the Ioka hasn't been easy. In hopes of helping, I offered to do music for a silent film night to raise money and awareness. Faced with a crucial fundraising deadline at the end of this month, organizers took me up on the offer, setting March 9 as the date.

One reason for joining in is that I want the Ioka to open as much as anyone. Not only is it an original silent film house, but the name alone makes it worth the effort. (Apparently it means "happy gathering place" in the tongue of a local Native American tribe.) Also, I was eager to do a screening in Exeter Town Hall because it's one of those classic New England public buildings (wood floor, high ceiling) with wonderfully live acoustics.

But would it work? Would people $15 a head to give up a Saturday night and help support reopening the Ioka? We got great press in the weeks before showtime, but still, you're never quite sure.

The next thing I knew, it was 20 minutes until showtime, and I was playing warm-up music while the crowd noise built behind me. I'm a little superstitious about looking over my shoulder at the house prior to a show, but by then I could tell we were in for a big night. By 7:30 p.m., the place was jammed, with everyone raring to go.

Emcee Trevor Bartlett welcomed all and led us in singing 'Happy Birthday' to a fellow organizer. I kept my remarks uncharacteristically brief, and then 'Sherlock Jr.' took over.

For me, it was the same challenge that all comedies present: the need to keep it light so that people can hear others laughing, which helps build overall audience reaction.

I've done 'Sherlock Jr.' many times, and I've found it's usually touch-and-go until the "money in the trash" scene, which produces the first reliable big laugh. Depending on how that goes, you can usually tell what kind of screening it'll be.

Well, last night there was no doubt. You could not have asked for a more enthusiastic audience. The first key scene produced a huge explosion of laughter, so I knew it would be a good ride from then on. The trick would be to stay back and let the on-screen action carry the comedy, and resist the temptation to overdo it.

Keeping things in check requires some energy. But I was able to manage it, to the point of using total silence in a few places to bring out the comedy. Even so, I actually think I could have played chopsticks during the film and the audience would have loved it anyway.

Reaction was strong throughout, even during the sequence when Buster jumps into the screen and then the setting keep changing on him. This stands as one of Buster's great achievements, but I've found it rarely gets big laughs. Well, it did last night. (Weirdly, the interior of the movie theater in 'Sherlock Jr.' looks uncannily like the Ioka!)

After intermission, 'The Cameraman' (1928) produced gales of laughter. At one point, people laughed at something that I'd never noticed before. After the frosted glass in an office door is destroyed three times, there's a scene where employees enter the office and the door is briefly glimpsed. People laughed, and I saw why: the glass was backed by a tight metal mesh! Never caught that before until the Exeter audience pointed it out.

I did kinda let loose during the Tong War sequence, but still modulated things as Buster worked the scene for laughs.

One nice success, I thought, was in the changing room scene, where Buster and Ed Brophy mix it up. At a screening in January, I was flummoxed when this scene produced almost no laughter. I think what happened was that I had the music too frantic and too "funny" too soon, and once you get into that pattern, it's hard to pull back.

So this time, I kept it as simple as possible. A very spare (but graceful) waltz setting of the main theme I was using, as if accompanying a very delicate ballet. And it worked!

I'm not sure if it was just the different audience, but the scene really seemed to build in a way that was very satisfying. Also, I lucked out in that the pauses in the action seemed to match up to ends of the phrases I was spinning out, so that helped it all come across, I thought.

The last 10 minutes of 'The Cameraman' are very special to me for several reasons, so it was a special thrill to accompany them in Exeter and get such a huge response.

At the film's end, the crowd just went nuts! The lights came on, and I was honored to get a standing ovation. But the applause was really for Buster, and for me it remains immensely satisfying to help bring his work to life for audiences today.