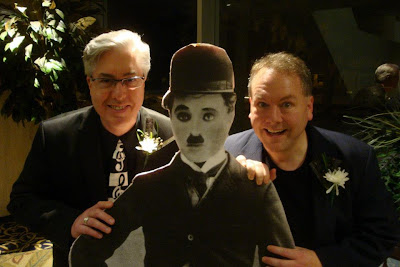 Accompanist Greg Foreman (at left) and I flank a familiar figure at this year's Kansas Silent Film Festival in Topeka, Kansas.

You know, I've come to think of the Kansas Silent Festival as my own personal Brigadoon.

Once a year, I parachute into Topeka, Kansas, a community to which I have absolutely no connection whatsoever, and take part in a two-day silent film festival. (Sometimes my wife joins in.) And then I disappear for 363 days, until it happens again. And there it all is again: the organizers, the volunteers, the musicians, the fans, the White Concert Hall at Washburn University, the fried pickles at the Hanover Pancake House, and eternally-under-renovation state capitol building.

I don't know what the Topekans make of this annual pilgrimage, but I really get a lot out of it. I think going somewhere different and working with people for a limited time on something you all care about is good for soul. It's kinda like having grandchildren, I guess: all the pleasure of shared experience but without the week-in, week-out slog of day-to-day responsibilities. Or maybe it's the same attraction offered by a cause like 'Habitat for Humanity,' but instead of affordable housing being the common denominator, it's the cinematic accomplishments of Mack Swain and Fatty Arbuckle

This year's festival (Friday, Feb. 22 and Saturday, Feb. 23, 2013) was more of a bonding experience than ever due to bad winter weather augmented by personal mishaps. The Mont Alto Motion Picture Orchestra, regular featured performers at the festival, made it about halfway from Colorado before getting stranded in Hays, Kansas on Thursday, the day before the festival opened. Facing full-blown blizzard conditions, a partial shut-down of Interstate 70, and then one of the musicians getting ill, band leader Rodney Sauer made the tough decision to turn back.

Wow! You'd think that the loss of the marquee musical act would put a crimp in a festival featuring live music as one of the chief attractions . But the remaining musicians (Marvin Faulwell, Greg Foreman, Phil Figgs, and yours truly) were able to fill in, and the schedule went on as planned. Yes, the snow delayed my arrival from Thursday to Friday, but I got there in time. Yes, Greg Foreman's car broke down outside Lawrence, Kansas, but a new battery did the trick. And yes, the head projectionist couldn't make it up from Wichita, but other folks filled in. 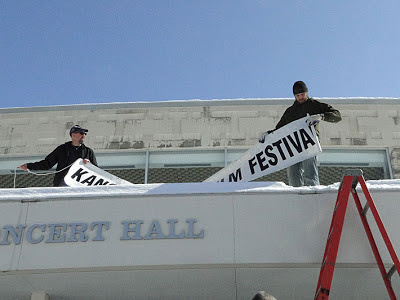 Attendance was down a bit due to the snow, but there was a certain "the show must go on" energy that lent an edge to the proceedings. (Above, that's Karl Mischler from New York and Trevor Jost from Kansas putting up a banner on Washburn University's snow-covered White Concert Hall.) Just about everyone I expect to encounter each year was there, and I had the privilege of meeting some new folks, too, including guests of honor Paul Gierucki and Brittany Valente of Cinemusem, Inc., invited because of their work restoring a collection of 100 Keystone films in honor of the pioneering slapstick studio's recent 100th birthday.

My first "sub" work came Friday night on 'Fatty and Mabel Adrift' (1916), an ambitious Keystone comedy that Mont Alto was scheduled to play. Sitting at the piano, I was worried that it might come across as 'Fatty and Mabel and Accompanist Adrift,' but it seemed to hold together, and no one threw anything. (Except on screen—it was a Keystone film, after all.) Funny, but this situation was tailor-made for my seat-of-the-pants improv-heavy approach, so it was actually kind of fun to be of service.

Saturday was marked by real-life slapstick, in the form of festival director Bill Shaffer slipping on ice, an accident that left him with several stitches, a horribly swollen eye, and a sore shoulder and upper arm where he fell. But thankfully, it wasn't any worse. It's good that my wife came along this year; as an occupational therapist, she helped Bill with some exercises for his shoulder, and is now the festival's unofficial on-call first aid and rehab specialist.

Even with Bill injured, we all soldiered on through the day's programs, with organist Marvin Faulwell doing an impressive job filling in for some of the bigger Mont Alto gaps (features such as Keaton's 'The Three Ages' (1923) and William S. Hart in 'The Narrow Trail' (1917), and me taking some of the shorter flicks.

I got a chance to take in Raymond Griffith's film 'Hands Up!' as an audience member instead of accompanist (as Greg Foreman did the music), and I was surprised at what a difference film speed seemed to make. I've done the film several times off a disc that plays at probably 21 frames per second, and it never fails to produce gales of laughter as Griffith works his way out of jam after jam. 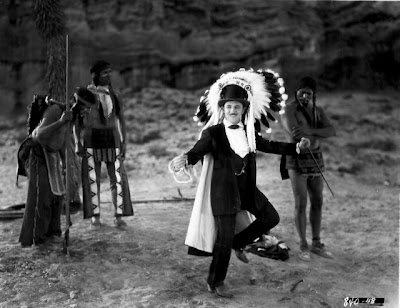 Raymond Griffith teaches more up-to-date dance steps to his captors in one of the best moments, I think, from 'Hands Up!' (1926).

But the festival ran a 16mm print at 24 frames per second, which speeded up the action noticeably and made the whole affair much more cartoon-like. Alas, I think that short-circuited a lot of the timing and pacing of Griffith's comedy, which rushed by before the audience could process and respond. Was it the speed, or some other factor? Well, for whatever reason, the film didn't get the strong reaction I thought it would. Interesting how sometimes the reaction happens, and sometimes it doesn't. Film speed? Sun spots? The next snowstorm coming in on Sunday?

For me, a highlight of this year's edition was improvising accompaniment to Gierucki's Keystone presentation at the festival's Cinema Dinner, held on Saturday before the evening's program. I came up with upbeat material that seemed to fit the films quite nicely, which is a really satisfying thing when it happens—especially at such a prominent event. Some people yearn to score a hole-in-one; I seek that perfect off-the-cuff one-reel piano score. (Some people go to Aruba in February; I go to Topeka.)

I'm pleased to report that festival director Bill Shaffer is on the mend, and also that the dates have been set for next year's Kansas Silent Film Festival. It's Friday, Feb. 28 and Saturday, March 1, 2014. See you there! We'll bring the bandages!
Posted by Jeff Rapsis at 2:31 PM