Hoping for a big turnout for the IOKA
on Saturday, March 9 in Exeter, N.H. 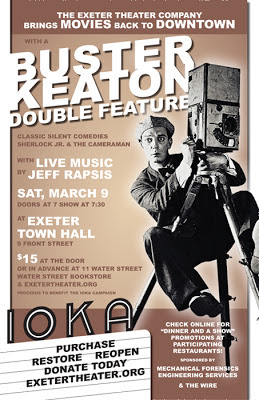 What would you do if your town boasted a one-screen moviehouse that opened back in 1915, and continued to show films into the 21st century? You'd celebrate it a community landmark, one with a long history of bringing together people for the shared experience of the cinema, right?

But what would you do if that theater closed in 2008 and was threatened with demolition? You'd try your darndest to keep that from happening, right?

Well, I'm pleased to report that's what's happening in Exeter, N.H., where efforts are underway to restore and reopen the IOKA theater. The one-screen moviehouse did indeed open its doors in 1915 (with a screening of 'Birth of a Nation,' no less), but closed in 2008, in part for lack of a modern fire supression system.

You can't keep a good theater down, though, and so a community group is hoping to transform the now-shuttered IOKA into a community performing arts center.

It won't be easy. For one thing, the Exeter Theater Company (http://www.exetertheater.org) must raise quite a bit of money this month just to stay on track. To that end, we're staging a benefit silent film screening on Saturday, March 9. It's at Exeter Town Hall, just across the street from the Ioka, and I hope it helps give people a sense of the possiblities of restoring and reopening a vintage downtown theater.

Tickets are $15; doors open at 7 and showtime is 7:30 p.m. We're screening two films about film: Keaton's 'Sherlock Jr' (1924) and then, after an intermission, 'The Cameraman' (1928). Should be fun, not only because both films are Keaton at his peak and great pictures for new audiences, but interior of the theater in 'Sherlock Jr.' looks remarkably similar to the IOKA.

If you're in the area, please come join us on Saturday night. We've received quite a bit of publicity and so I'm hoping for a good crowd. In any case, it has all the makings of one of those laugh-filled nights, so I encourage all to attend, both to support the IOKA and to laugh your fool head off.

Here's the press release that went out awhile back. See you there! 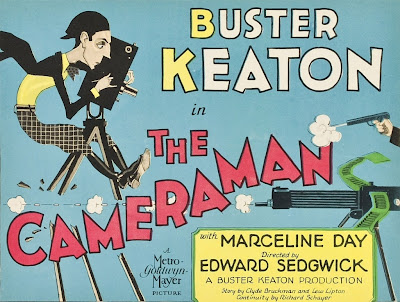 See for yourself with a screening of 'The Cameraman' (1928), one of Keaton's landmark feature films, on Saturday, March 9 at 7 p.m. at Exeter Town Hall, 10 Front St. in Exeter, N.H. Admission is $15 per person, with proceeds to support the campaign to restore and reopen the IOKA Theater. 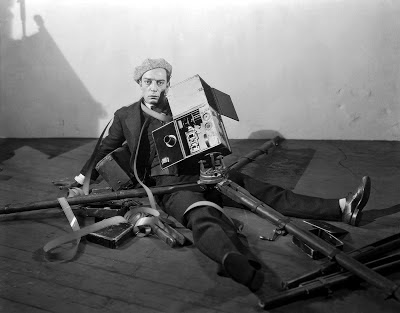 The program will be accompanied by live music performed by New Hampshire composer Jeff Rapsis.

"Jeff is a true artist and his work represents exactly the kind of fun, innovative films we plan to show at the IOKA when it re-opens," said Trevor Bartlett, Programming Chair of the Exeter Theater Company's board of directors. "A live performance like this is a rare thing indeed and we're honored that Jeff is hosting this special event for our benefit."

The Exeter Theater Company is spearheading efforts to restore and reopen the IOKA, a historic theater in downtown Exeter. The theater served as the community's downtown moviehouse and performance center for nearly a century before closing in 2008.

The benefit screening at Exeter Town Hall is presented with support from Mechanical Forensics Engineering Services of Rochester (www.mfes.com) in cooperation with the Town of Exeter.

In 'The Cameraman,' Keaton creates comedy that plays with the nature of film and reality. The movie contains several classic sequences often cited as among Keaton's best, including a scene where Keaton and a large man both struggle to change into swimsuits in a tiny dressing room. The scene, which runs several minutes long, was filmed in one take.

'The Cameraman' will be preceded by a shorter Keaton picture, 'Sherlock Jr.' (1924), which is also a film about film. In 'Sherlock Jr.,' Keaton plays a movie projectionist hoping to become a great detective. The fun begins when he dreams himself into the plot of his theater's latest crime melodrama, with unexpected results.

Keaton, along with Charlie Chaplin and Harold Lloyd, stands as one of the three great clowns of the silent screen. Many critics regard Keaton as the best of all; Roger Ebert wrote in 2002 that "in an extraordinary period from 1920 to 1929, (Keaton) worked without interruption on a series of films that make him, arguably, the greatest actor-director in the history of the movies." But while making films, Keaton never thought he was an artist, but an entertainer trying to use the then-new art of motion pictures to tell stories and create laughter. 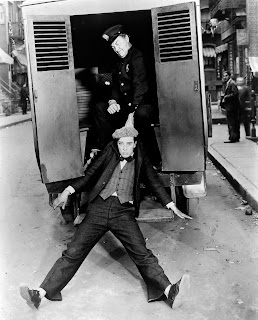 An entirely intuitive artist, Keaton entered films in 1917 and was quickly absorbed by the new medium. After apprenticing with popular comedian Roscoe "Fatty" Arbuckle, Keaton went on to set up his own studio in 1920, making short comedies that established him as a one of the era's leading talents. A remarkable pantomime artist, Keaton naturally used his whole body to communicate emotions ranging from sadness to surprise. In an era with no special effects, Keaton's acrobatic talents meant he performed all his own stunts.

Jeff Rapsis, a New Hampshire-based silent film accompanist, will provide live music for both films. Rapsis, who accompanies silent film screenings at venues around the nation, improvises live scores for silent films using a digital synthesizer to recreat the texture of the full orchestra.

"They weren't intended to be watched on a home entertainment center by, say, just you and your dog," Rapsis said. "However, if you can put all the elements back together, the films really do spring back to life. At its best, it's possible for today's audiences to experience why people first fell in love with the movies."

Rapsis said the Keaton program in Exeter is a great way to remind local audiences why it's important to restore and reopen a facility such as the IOKA Theater.

"These films were intended to be communal experiences, and they're part of the DNA of the IOKA," Rapsis said. "We hope that showing the Keaton films to a live audience will help area residents understand another reason why it's important to save the IOKA. Silent film is just one of many types of performance and art that can bring people together and add to a community's quality of life."

Buster Keaton's ‘The Cameraman’ will be shown on Saturday, March 9 at 7 p.m. at Exeter Town Hall in Exeter, N.H. Admission is $15 per person. For more information, visit www.exetertheater.org. For more info on the music, visit www.jeffrapsis.com.
Posted by Jeff Rapsis at 10:40 AM