Some old-time religion: Scoring
'The Ten Commandments' and 'Ben Hur' 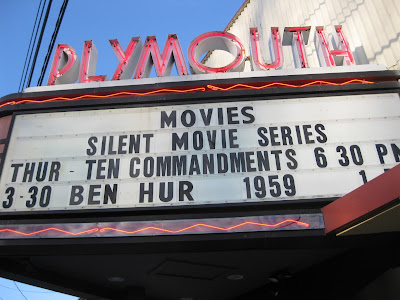 You know Easter is on its way because we're breaking out the Biblical blockbusters. This year it's Cecil B. DeMille's 'The Ten Commandments' (1923), which we screened last night in Plymouth, N.H., and then tonight it's 'Ben Hur' (1925), which I'm doing in Concord, N.H.

I'm sorry to report that last night's audience at the Flying Monkey was puny — exactly one person for each commandment! When I pointed this out in my remarks, one of my die-hard regulars raised her hand and yelled that she wanted to claim 'adultery.' I got the feeling it was not in the spirit of 'Thou Shalt Not,' but perhaps with other intentions.

Still, off we went with this strangely bifurcated two-films-in-one movie. Unlike the big 1956 remake starring Charlton Heston, the original combines the Moses scenes with a modern-day (for 1923) story about two brothers, one who respects the commandments and another who breaks them. (Guess who has the more interesting life?)

I pondered not saying anything about this before we showed the film, as I think it's always better to let people make their own discoveries. But because people are so familiar with the remake (which is all set in Biblical times), I felt it was an important enough departure to mention in advance.

I had sort of turned off the "accompaniment" part of my brain after Cinefest in Syracuse, and found it was hard to get in the groove for 'The Ten Commandments.' It helped that DeMille's opening scenes are really dramatic and effective. I finally settled on some worthy melodic material that proved versatile enough to cover both the Biblical story as well as the modern day tale. 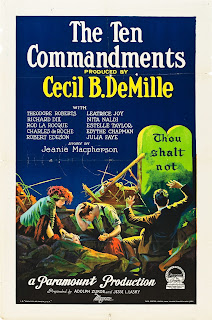 Most satisfying was music for the 'Golden Calf' scenes, a simple-minded celebratory ditty heavy on repeated notes that was perfect for mindless partying on a grand scale. It seemed to come out of nowhere, but later I realized it was a not-too-distant cousin of music I've played for the Tong War scene in Buster Keaton's 'The Cameraman.' Wherever it came from, it sounded great when played at a certain plodding pace, with bass drum and cymbals on the downbeats.

Probably the toughest music was for the dramatic scenes when God reveals the Commandments to Moses one at a time, by way of a reverse explosion, after which the Commandments appear in the sky as if each was the title of a Broadway musical. See the hit show THOU SHALT HONOR AND KEEP THE SABBATH! I figured there would be 10 of these, and playing the same music each time would get tiresome. So, on the fly, I tried to rig it so that each time a new commandment was revealed, things would shift into a different key, and generally upwards.

Would I do it again? Yes, as an audience of 10 people is no way to know if a film still really works. (Possible reasons for low attendance was that the film was shown on a different day of the month than we usually do, and that the local college was on spring break this week.) So look for this one to pop up again at the next excuse for a Biblical epic.

Can anyone tell me when St. Swithin's Day is?

I'm a little more certain of 'Ben Hur: A Tale of the Christ' (1925), which we'll uncork tonight at Red River Theatres in Concord, N.H. Showtime is 7 p.m. If you'd like more info, here's the press release that went out a little while ago. 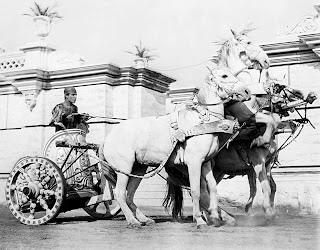 CONCORD, N.H.—One of early Hollywood's greatest epics returns to the big screen with a showing of 'Ben Hur, A Tale of The Christ' (1925) on Friday, March 22 at Red River Theatres in Concord, N.H. The screening, with live music by silent film accompanist Jeff Rapsis, starts at 7 p.m. Admission is $10 per person.

'Ben Hur,' starring Ramon Novarro and Francis X. Bushman, was among the first motion pictures to tell a Biblical-era story on a gigantic scale. The film, which helped establish MGM as a leading Hollywood studio, employed a cast of thousands and boasted action sequences such as a large-scale sea battle. The film is highlighted by a spell-binding chariot race that still leaves audiences breathless.

Set in the Holy Land at the time of Christ's birth, 'Ben Hur' tells the story of a Jewish family in Jerusalem whose fortune is confiscated by the Romans and its members jailed. The enslaved family heir, Judah Ben Hur (played by Novarro, a leading silent-era heartthrob) is inspired by encounters with Christ to pursue justice, which leads him to a series of epic adventures in his quest to find his mother and sister and restore his family fortune.

'Ben Hur,' directed by Fred Niblo, was among the most expensive films of the silent era, taking two years to make and costing between $4 million and $6 million. When released in 1925, it became a huge hit for the newly formed Metro-Goldwyn-Mayer studio. The film proved so popular, it was successfully re-released in 1931 with a soundtrack, long after talkies had swept away silent film. One reason the film was so expensive to make is because it was partly shot in Italy, where a sea battle scene led to a fire that endangered the many extras on board. No one was hurt, but MGM moved the delay-prone picture back to Hollywood to be finished. 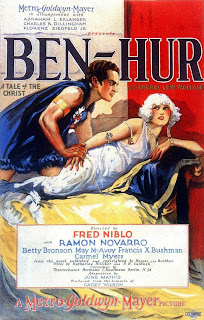 The chariot race scene in 'Ben Hur,' with Novarro and other cast members driving teams of horses at high speed on a mammoth dirt racetrack in a gigantic replica of a Roman stadium, was among the most complicated and dangerous sequences filmed in the silent era. It remains noted for its tight editing, dramatic sweep, and sheer cinematic excitement. The chariot race was re-created virtually shot for shot in MGM's 1959 remake, and more recently imitated in the pod race scene in 'Star Wars Episode I: The Phantom Menace.'

Besides Novarro in the title role, the film stars Francis X. Bushman as Messala, the Roman soldier who imprisons the Hur family; Betty Bronson as Mary, mother of Jesus; May McAvoy as Ben Hur's sister Esther; and Claire McDowell as Ben Hur's mother. 'Ben Hur' was based on the best-selling 1880 novel by General Lew Wallace, which interwove the story of Christ's life with the Ben Hur clan, a fictional Jewish merchant family. Celebrity "extras" in the chariot race scene included stars such as Douglas Fairbanks, Harold Lloyd, Lionel Barrymore, John Gilbert, Joan Crawford, Lillian Gish, Mary Pickford, and a very young Clark Gable.

The film was remade by MGM in the 1950s in a color and wide-screen version starring Charleston Heston that garnered 11 Academy Awards. Some critics believe the original 1925 version offers superior drama and story-telling. MGM executives at the time, aware of the quality of the original version, attempted to destroy all prints of the 1925 'Ben Hur,' sending the FBI out to confiscate collector copies in the 1950s. However, the studio did preserve the negative of the 1925 version, so the film remains available today.

The original release of 'Ben Hur' included several early technicolor sequences that were converted to black and white for the 1930 re-release. However, an original 1925 print with the color sequences was discovered in the Czech Republic in the 1980s, and these have been incorporated in the restoration being screened at Red River Theatres.

Organizers have checked with the Diocese of Manchester and the screening of 'Ben Hur' does not count as attending Mass for Palm Sunday weekend.