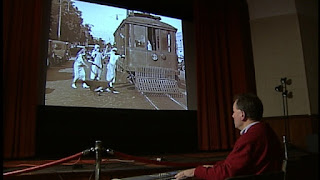 A screen capture from tonight's piece on me by New Hampshire Chronicle.

Just a quick note to welcome any folks who've been steered here by the "New Hampshire Chronicle" segment on me. Thanks for stopping by!

I maintain this blog as a source of info about upcoming screenings (which you can get via the 'upcoming screenings' link at right), and also as a repository of running commentary and thoughts about the process of creating live scores for silent films.

"New Hampshire Chronicle" is a five-nights-a-week half-hour local show on WMUR-TV Channel 9 (based in Manchester, N.H.) featuring people and places in the Granite State.

It's very well done and I was thrilled to have the producers contact me last month to ask about doing a segment.

But it's not the first time I've been on Channel 9. Back in 1971, age the ripe old age of 7, I was scheduled to be in the audience of the Uncle Gus Show, the station's old afternoon kiddie program, but we were pre-empted by live coverage of the launch of Apollo 14! Darn!

Years later, by complete dumb luck, I was the first driver (after Gov. John Sununu's limosine) to travel on a newly opened stretch of Route 101 in Raymond. This was in the winter of 1985, and I was home from college, wearing my Holden Caufield hunting cap complete with ear flaps.

After being yelled at by a state cop for stopping in a travel lane (the road was barricaded and I didn't know what to do), I was interviewed from behind the wheel by Channel 9's Odetta Rogers. ("You used to have to go all around, but now you can go straight through.") We still pull out the tape once in awhile if someone wants a good laugh at my expense.

Well, here I am on Channel 9 again, along with Parker's Maple Barn and Fritz Wetherbee on Tuftonboro's funny names. Weirdly, I won't get to see the segment tonight when it's broadcast (at 7 p.m.) because I'll be in the middle of accompanying Johnny Hines in 'Conductor 1492' at the Manchester Public Library. Show starts at 6 p.m. and it's a corker of a comedy, so hope to see you there!

For now, I want to thank Mary-Paige Provost and her team from Chronicle for spending so much time and effort following me around in the past few weeks, and for all their interest. I'm especially thrilled that they were so impressed with the Wilton Town Hall Theatre (one of favorite venues) that the crew returned later to host all of this week's episodes there. Nice!

To visit Chronicle online, and see the segment once it's posted, visit the show's online home.