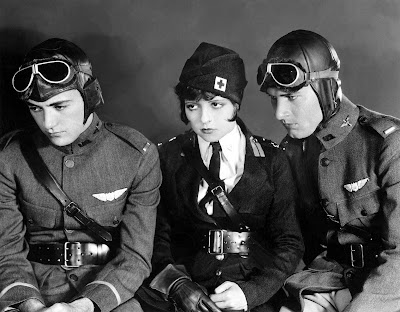 Until recently, I had never heard of Magdalen College, a small Catholic liberal arts school in Warner, N.H. But there I was this past Friday, driving up Kearsarge Mountain Road, looking for the campus, home to another silent film adventure.

I had used Google Maps to get directions, and at first I thought Google hadn't heard of Magdalen College, either, until I realized that I had mistakenly typed in "Magadan," the city in Siberia where the notorious Russian prison camps of the Gulag Archipeligo were located. Oops!

Thankfully, Magadan College was a lot closer—not even an hour's drive from my home base in New Hampshire. And yes, there it was: off to the left, a handsome collection of neat buildings on a wooded campus that looked attractive even in the gloom of mud-season twilight.

I was there at the invitation of Father Neil Roy, a faculty member and movie buff who's attended several previous performances of mine. At Father Roy's request, I was there to provide live music for a screening of 'Wings' (1927) as part of a "Faith and Film" Honors Colloquium that he leads.

So at about 6:30 p.m., I pulled up to the school's St. Paul's Multi-Purpose Facility and went looking for Chris, my appoointed student helper. He wasn't hard to find, as the school is small by design and currently enrolls less than 100 students. Everyone I encountered was friendly, upbeat, and actually called me "sir."

We set up in a large room that serves as a theater and rehearsal space. Instead of a screen, we had an immense white wall, which worked great! I wasn't sure what to expect for turnout, but the screening was open to the public and we did get a good number of "outside" folks. I think we had 50 people altogether.

And I can't exactly say why, but for some reason I was in the zone almost completely and right from the beginning. By "in the zone," I mean that place where I can draw music that seems to come naturally from a film as it screens. It just all held together really well. 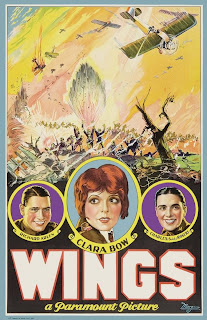 I think it helped that the audience was into it right from the start. The comical character of Herman Schwimpff (played by El Brendel) got more laughs than I'd ever heard before at a screening of this film. And that audience engagement set the stage for the drama that was to come, I think.

By advance agreement, we showed the version of the film that comes with an intermission. (Those folding chairs can take a toll.) But I found compelled to keep playing (switching to a strings-only setting), even as everyone filed out during the break, leaving me at one point entirely alone! But I didn't want to lose the state of mind that I'd achieved, which would likely happen if I took a break or came up for air. So on I played.

What was nice, however, was that as the crowd filed in, I began incorporating scraps of Offenbach's 'Can Can' melody, knowing that the Paris party scenes would be up next. It really helped tie things together and worked well in the room, I thought. Once the second half began, things continued to go well, and at some point I got to that state of mind where I felt I had nailed it.

So for maybe the final third of the movie, I felt absolutely confident, and with that state of mind, was able to do more than I usually can. I found a little fanfare figure to intersperse among the busy "flying music" that I usually play in 'Wings,' which my wife later pointed out sounding like part of the 'Superman' theme that John Williams created. Hey, I steal only from the best!

But I was also able to do things like incorporate the "Teddy Bear" motif (alternating major and minor chords an augmented 4th apart) into the trimphant march music that occurs when the action shifts state-side at the very end.

And best of all, I felt, was how the very ending of the picture came together, with just the right sense of softness and wonder growing out of the themes that I'd been using all throughout the score. It was so satisfying to be in that space and sense that I had a clear path, musically, to a satisfying ending. Talk about faith in film!

I was actually confident enough to go out on a mezzo-forte held chord (A Major) in the style of the ending of Dvorak's 'New World' Symphony, something I usually don't have the discipline to pull off, but which seemed to be just right for 'Wings' on Friday night. But I couldn't help punctuating it with a final "button" to finally end it. Bang!

And then I just sat there for a moment, overcome by the film's drama ('Wings' never fails to get to me, even after a dozen screenings) but also feeling this wonderful sense of creativity and energy that I had tapped into at just that time, at just that moment, that had just helped make something that everyone in the room had shared. There was also the wonder that we had brought to life the work and vision of hundreds of people no longer among us. At the time, I didn't think this. I just felt it.

Such moments have become one of the reasons I do this. I savored it all for just a moment, and then stood and turned around to a very generous ovation. And with this, I was overcome in an entirely different way, which happens when you climb out of that very tight space (not unlike a cockpit) that you inhabit while doing a live score, and rejoining everyone with whom you shared this communal experience.

So it just all really great. It seemed nearly everyone wanted my card afterwards, and I wound up standing by the door greeting everyone like I was part of a reception line.

Leave it to me, an altar boy with six years experience, to finish things off with a dumb inappropriate joke. At the end, I noticed the Magdalen students were taking my cards in a very polite fashion, using both hands. So, in a jovial mood, I quipped something along the lines of hey, it's not the Eucharist, folks, ho ho!

No reaction. And thus I learned one more thing: that God wants me to stick to silent film music.