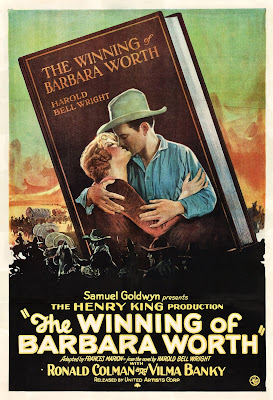 I'm probably one of the few musicians who get compliments on working the "Dies Irae" into my performance. That happened yesterday, following a screening of 'The Winning of Barbara Worth' (1926) at the Wilton (N.H.) Town Hall Theatre on Sunday, April 28.
Yes, the "Dies Irae" wound up being a helpful way of communicating doom prior and during the climactic flood scenes, and at least one person noticed the old tune from the Catholic Death Mass.

But then another woman congratulated me on how I used the tune "The Magic Moment" as part of the score. Really? I had just made up the whole thing right there on the spot, so how did she get the impression I was using a 1950s pop tune? I told her I don't really know the song, but maybe a hook in one of my melodies somehow reminded her of it.

When I got home I found the song on YouTube, and sure enough, there's a part of it that really does seem quite similar to one of my own melodies—specifically, the phrase that comes right after the title words ("This magic moment..."), which follows the scale up five notes from the submediant.

Well, that's what happens when you try to keep things simple. You end up accidentally borrowing moves from the Drifters! 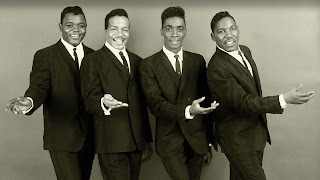 I was actually quite excited about doing 'The Winning of Barbara Worth' with a live audience, as it seemed to have all the elements of a great silent film experience. And it did, mostly, despite a few unexpected things that came up.

First was the weather. After a long New England winter, this past weekend was the first one with A-plus weather since maybe last September. The sun was out, the sky was blue, the grass was green. (And had to be mowed.) So the last thing anyone would have wanted to do on Sunday afternoon was go into a darkened movie theater and watch a film set in the scorching desert. (Me included!) Surprisingly, we actually had a strong turnout of more than 100 folks, I think mostly because of an avalanche of pre-publicity in the local press, which sometimes happens.

Then there was the print, which was on a DVD released by MGM some years ago. While it looked great at home on the small screen, the image wasn't nearly as good when projected onto a big screen. I realize director Henry King was often shooting in direct desert sunlight, and so the contrast would be a little tough. But whole sections of the film seemed fuzzy and thin, and the tinting and toning seemed excessive, too. Parts looked really good, though, so I don't know what was at the root of this inconsistency.

And finally, there was me. Early on in the film, there's an extended party scene in which the Willard Holmes character (played by Ronald Colman) is welcomed to the desert community of Rubio City. Several shots of rustic guitar playing are included, so I felt I'd switch to an acoustic guitar setting for the entire scene, which alternates between light comedy and setting up the romance between Colman and Vilma Banky.

So I deftly switched the setting, and was then going for tenderness. So it was a real disappointment when I touched the keyboard of my Korg digital synthesizer, and out came a preprogrammed electric guitar howl backed by a driving electro-pop beat. It was like I'd stuck my finger in a light socket. Aaah!

I quickly shut the patch down and surfed to the correct setting, which took just long enough to really call attention to lapse. Damn! In the meantime, the movie limped on. It takes a lot of effort to help a film cast its spell and not get in the way, and here I went, throwing a sonic bomb into the mix to destroy any trance that had set in. The film soon reasserted itself, but what a bonehead thing to do at just the wrong moment—exactly when the spell was starting to take hold.

I recovered, and things went pretty well after that, I thought. But audience reaction was somewhat muted, I felt, especially at moments of comedy that King had salted throughout the film. The scene where Clyde Cook and Erwin Connelly tell jokes to an angry mob should have produced a lot more laughter than it did; likewise a post-flood scene where the Cook character flicks some mud into the face of E. J Ratcliffe as James Greenfield. (How odd to name a villain 'Greenfield' in a story about desert irrigation.)

I loved how the flood sequence turned out, with lots of musical drama and energy (yes, including the Dies Irae) swirling around and building until the moment that the raging waters finally swallow up Greenfield, when everything came together on one big unison D in octaves. Powerful stuff, I thought!

But again, not the big reaction that I expected. At the end, applause was polite but not momentous. Maybe I really did kill it with my musical gaffe, but I hope not. I think the story itself has some structural flaws: after the big flood, the Holmes character goes off again to tame the Colorado, and all we get is a title card reading "And Holmes won!" Kind of a let-down, dramatically.

Maybe it's because the Colman character's first name was 'Willard.' Perhaps the silent film community doesn't include a lot of Mitt Romney fans. :)