Joan of Arc to Tillie's Punctured Romance:
From the sublime to the ridiculous 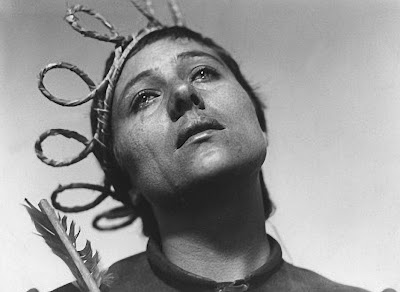 If I start showing symptoms of schizophrenia, blame it on silent film.

This past Sunday, we ran 'The Passion of Joan of Arc' (1928), an intense drama that was emotionally draining for everyone, accompanist included. Then, two nights later, we ran 'Tillie's Punctured Romance' (1914), the slapstick comedy feature starring Marie Dressler and a non-tramp Charlie Chaplin.

About all they had in common was that they were both silent films. Otherwise, it was like they were from different planets. And that dichotomy extended to the musical challenges that each film presented.

'Joan of Arc' in Wilton, N.H. drew an audience of about 50 people on Easter Sunday—an appropriate day for a film, I thought, that attempts parallels with the Passion of Christ. To score it, I stuck with strings only, to go along with director Carl Dreyer's intentionally limited visual palette of mostly close-ups. I thought that alone would help signal to the audience that this was something different, the same way Bernard Herrmann used strings for Hitchcock's 'Psycho' (1960). (I recall somewhere Herrmann described that music as "a black and white score for a black and white film.")

Complicating things was the fact that I had only just returned that day at 2 a.m. from a week in Mexico with my wife's family. So going into it, I hadn't prepared anything elaborate. All I had were two motifs that I thought would be enough: a series of rising chords that alternated between C minor and Eb minor, with added notes on top, and then a little downward cell of three staccato notes in C minor (D, C, G) that could be spun into something rapid or dramatic or whatever the occasion required.

Well, I should probably go to Mexico more often, because it turned out to be one of those times when everything fell into place. Somehow I was in synch with the film's dramatic rhythms right from the start, building up the texture when it was most effective and then backing off at what turned out to be just the right time, and so was able to create music that I felt really enhanced the visuals. 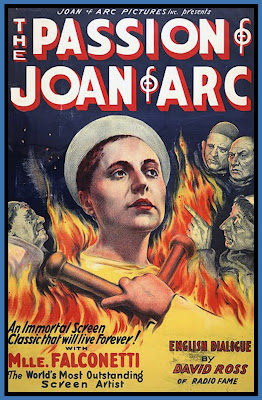 And I got caught up in it. 'Joan of Arc,' with its extreme close-ups and weird angles and stark visuals and abrupt cutting, is a film that really does work best on a big screen in a theater, I think. Seeing it all on a large screen somehow opens up vistas (and emotions) in a way that impossible in other formats. It's like the George Seurat painting, "A Sunday Afternoon on the Island of La Grande Jatte," which in real life is a huge thing. You don't get it by looking at a plate in a book. You have to go to Chicago and see it in person to get it.

So at the end, I was more than a little drained. We seemed to have a higher number of first-timers in the audience for this one, and many approached me afterwards with kind comments. As intense and rewarding as it was, I was left wondering if they thought all silent film was like this!

About the music: By intention, I did not listen to the Richard Einhorn's 'Voices of Light' oratorio that is often used for this film. I wanted to develop my own material and approach without reference to other music, as I feel that helps in the originality department. Now that I've done that, I'm looking forward to watching 'Joan of Arc' with Einhorn's score, which I understand is very effective and moving.

And then, two days later, it was time for 'Tillie's Punctured Romance,' the early slapstick epic from Mack Sennett's Keystone studios. I had never done this film before, but somehow felt that the full orchestral texture that I usually use for features would be too much. So, for our screening at the Manchester (N.H.) City Library, I settled on a harpsichord and strings texture as a way to keep up with the film and not step on the laughs. 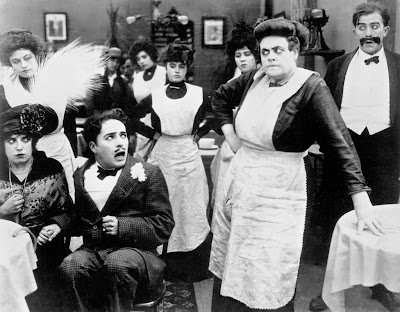 It's not an easy film to play for. In fact, it was a lot more difficult than 'Joan of Arc,' in that it was tough to hit the mark and punch up the comedy with just the right kind of music. But then, it's all slapstick, so you can get away with barreling through without missing too many moments. I recall telling people that 'Tillie' is comedy in the sense that in scene after scene, it's just any excuse for someone to kick someone else in the pants or push someone or throw something at someone.

I mean, when a film opens with a woman throwing a brick for her dog to catch, you get a pretty good idea right away of what you're in for. I watched and accompanied Tillie's with the growing sense that the story was not really about people. With everyone always fighting or bickering or finding any excuse to attach each other, it was more like dogs than people.

For Tillie's, I really did show up with nothing in mind, and had only watched the film on fast forward the night before (on my night off after 'Joan of Arc.') So off I went, and the Gods were not too cruel to me, allowing me to spin out a few fun melodic ideas right away and then draw upon them for the rest of the picture.

To my surprise, the audience of about 40 people stayed with the picture and actually laughed out loud at odd moments. I honestly didn't think it would produce any—an hour of slapstick is like eating the same flavor of ice cream every day for a month. But then again, a few moments that I felt sure would produce a reaction fell flat—for instance, the scene in the movie theater when it turns out Charlie and Mabel Normand are sitting next to a guy wearing a badge. It should be a highlight, but Tuesday night produced not a titter. 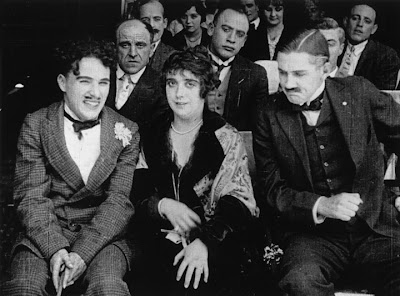 That man on the right has a surprise under his lapel...

I then did 'The Mask of Zorro' (1920) in North Andover, Mass. last night, which is verging on too much. Three screenings in four nights after being out of town for a week. I need a vacation!