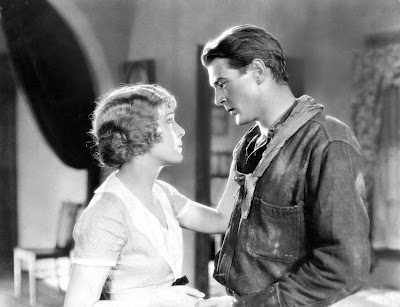 A local screening of Henry King's epic Western 'The Winning of Barbara Worth' (1926) this weekend (on Sunday, April 28 at 4:30 p.m. at the Wilton Town Hall Theatre in Wilton, N.H.) is due to none other than author, historian, and silent film guru Kevin Brownlow.

First, though, let me tell you that I'm eager to see how this film plays with an audience. I find it fascinating for many reasons—the location photography, the engineering and irrigation angle, all the period detail, and the storyline itself. Most interestingly, the main antagonist is none other than Mother Nature, which lends an epic scale to the proceedings.

But I'm never quite sure if my own personal enthusiasm translates into a successful film in the ultimate forum for silent film greatness: an actual movie theater filled with people. So we'll see. We just need a lot of folks to come out. So pray for lousy weather. :)

Update: The local daily paper, The Nashua Telegraph, has published a nice profile of me as a preview to this screening. Thanks to writer Kathleen Palmer for a great job!

I do have high hopes for this one, which I didn't know about until I had a chance to work with Mr. Brownlow during a program last October at the University of Arkansas in Fayetteville. Kevin was presenting a program called "The Wild West and the Reel West," an evening-long look at how early Hollywood actually helped keep the old West alive somewhat by providing employment for old-time horsemen, cattle-drive veterans, and so on. 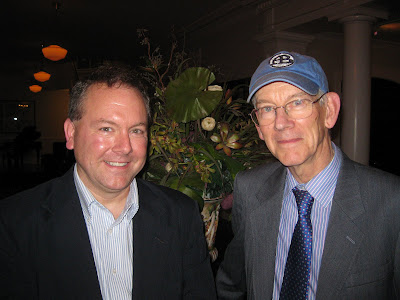 Kevin Brownlow and I at the University of Arkansas in October, 2012.

The program, built mostly from material assembled for Brownlow's excellent multi-part 1980 documentary 'Hollywood,' was in need of live music for a few segments. And so I was tapped for a once-in-a-lifetime chance to work with Kevin, a major figure in the silent film community who was given an Academy Award a few years back for his life's work, which includes restoring Abel Gance's 1927 epic 'Napoleon.'

What surprised me about Brownlow's choice of clips was how much of the film was not "historical" (meaning set in the past, such as in the 19th century) but actually involved contemporary stories set in what was then pretty much the present day. Yes, a lot of it looks like the "Old West" to my 21st-century eyes. But every now and then, you'd see a motor car among the horses and stagecoaches on Main Street, which made me realize these films were even more interesting to us today because they captured day-to-day reality in an America that was rapidly changing. (And it still is.) 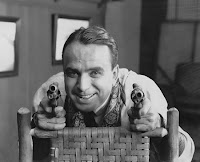 It wasn't the first time I'd noticed this. There's a Douglas Fairbanks Sr. comedy, 'Wild and Wooley' (1917), that pokes fun at stereotyped images of the Old West, which even then were seen as clichéd. In it, leaders of a progressive Arizona town need to entertain Fairbanks, a New York banker with a romantic fondness for the 'Old West.' So they replace all their modern improvements with old-time bric-a-brac: misspelled saloon signs, etc. How surprising to my modern eyes—and perhaps even funnier now than it was a century ago.

But back to Brownlow. For his presentation, among the films he drew from was 'The Winning of Barbara Worth,' which I'd somehow never encountered in a lifetime of silent film viewing. (Shows you how much material there is out there, even with 80 percent of it lost.) Turns out 'Barbara Worth' was one of the ground-breaking pictures that showed Hollywood how to do it right—in this case, how to shoot a Western in the truly wide open spaces, with backgrounds stretching seemingly to infinity.

This was achieved by director King's decision to shoot the entire picture on location in Nevada's immense Black Rock Desert, which stood in for California's pre-irrigation Imperial Valley. The entire cast and crew sweated out three months in the summer of 1926 to make the film under incredibly harsh conditions. There's a fascinating day-by-day account of the effort in the form of a long article by a Nevada historian who pieced together local news accounts of the shooting, which was a huge story at the time.

After seeing the clips of the film in Brownlow's presentation, I knew I had to program it. And thus we come to this weekend's screening of 'The Winning of Barbara Worth' at the Wilton Town Hall Theatre. There's more info about the flick in the press release below. But for now, I wanted to tip my cap to Kevin Brownlow for sharing his enthusiasm and passion for this still-lively and vital form of cinema. 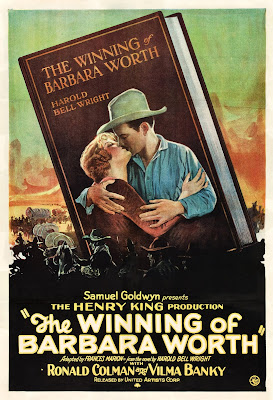 Rip-roaring epic silent Western to be shown in Wilton, N.H. on Sunday, April 28

'The Winning of Barbara Worth' (1926), ground-breaking outdoor drama, to be screened with live music

WILTON, N.H.—A film that helped set the stage for Hollywood's love affair with movies set in American West will return to the big screen in Wilton, N.H.

Live music for the movie will be provided by silent film accompanist Jeff Rapsis. Admission is free; a donation of $5 per person is suggested to defray costs.

'The Winning of Barbara Worth' is the latest in a monthly series of silent films presented with live music at the Wilton Town Hall Theatre. The series provides local audiences the opportunity to experience silent film as it was intended to be shown: on the big screen, in good-looking prints, with live music, and with an audience.

• Sunday, June 30, 2013, 4:30 p.m.: 'The Yankee Clipper' (1926). Set sail in the era of the great clipper ships in a thrilling race between American and British vessels speeding from China to Boston, with rival crews using only the wind and their wits to win. But will a romantic rivalry complicate the competition? Part of a summer series of seagoing silent films with live music.

• Sunday, July 28, 2013: 4:30 p.m.: 'The Sea Hawk' (1924). Swashbuckling historical adventure on the high seas about an English noble sold into slavery who escapes and turns himself into a pirate king. Based on a novel by Rafael Sabatini; later remade into a talkie starring Errol Flynn. Part of a summer series of seagoing silent films with live music.

'The Winning of Barbara Worth' will be shown on Sunday, April 28 at 4:30 p.m. at the Wilton Town Hall Theatre, 40 Main St., Wilton, N.H. Admission is free, with a suggested donation of $5 per person to defray expenses. For more information, visit www.wiltontownhalltheatre.com; for more information on the music, visit www.jeffrapsis.com.