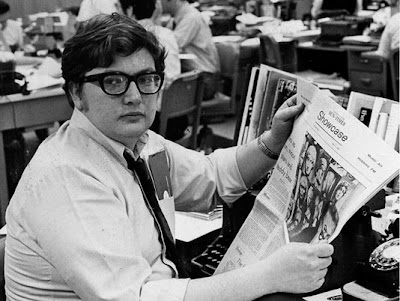 No film critic did more to champion the enduring value of silent cinema than Roger Ebert, who died yesterday at age 70.

Check out his writings. I know of no one else who spoke (or wrote) more eloquently on silent film. In many cases, he's helped me understand things that I otherwise would have missed.

Example: When it was time to show 'The Birth of a Nation,' I was looking for commentary to put the picture's blatant racism in context for screening on Martin Luther King Jr. Day.


"Griffith and "The Birth of a Nation" were no more enlightened than the America which produced them. The film represents how racist a white American could be in 1915 without realizing he was racist at all. That is worth knowing. Blacks already knew that, had known it for a long time, witnessed it painfully again every day, but "The Birth of a Nation" demonstrated it in clear view, and the importance of the film includes the clarity of its demonstration. That it is a mirror of its time is, sadly, one of its values.

But beyond film, Roger had a sensibility that reflected my own, perhaps because we both grew up in the now vanishing world of daily newspapers. And so I find I respond quite readily to other things he's written. His recent blog post pondering at a family funeral, about how he might have been the only living person to have remembered and known an obscure relative in an old family photo, was haunting and beautiful and thought-provoking all at the same time.

There are two books of his I want to read. One is about wandering the streets of London. The other is his recent autobiography, "Life Itself," which contains passages such as this one that I found excerpted, fittingly, at the end of the obituary in the Chicago Sun-Times, his paper:


"“ 'Kindness' covers all of my political beliefs,” he wrote, at the end of his memoirs. “No need to spell them out. I believe that if, at the end, according to our abilities, we have done something to make others a little happier, and something to make ourselves a little happier, that is about the best we can do. To make others less happy is a crime. To make ourselves unhappy is where all crime starts. We must try to contribute joy to the world. That is true no matter what our problems, our health, our circumstances. We must try. I didn't always know this and am happy I lived long enough to find it out.”

Labels: Life Itself, obituary, Roger Ebert, silent film, The Birth of a Nation